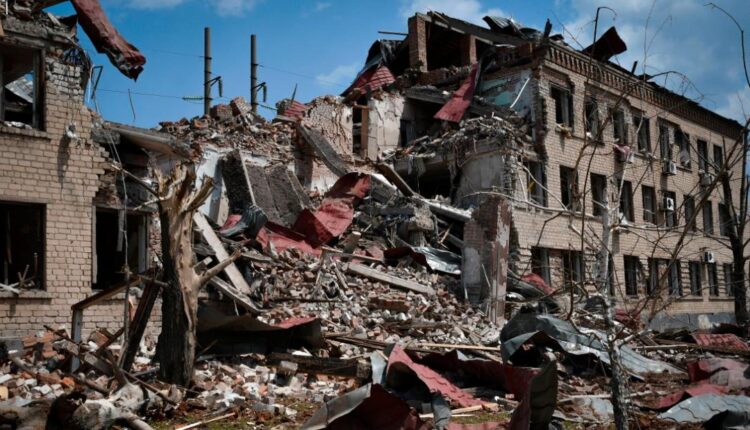 Oleksandr Striuk, the head of the civil military administration in the embattled Ukrainian industrial city of Severodonetsk, said on Saturday that Ukrainian forces were in a “tough defensive position” as fighting raged on the outskirts of the city.

In remarks on national television, Striuk said some of the most intense fighting was concentrated around the Mir Hotel on the outskirts of the city.

“A real battle can be heard in the main bus station area,” he said. “Our military is in a tough defensive position. The city is being constantly shelled. The humanitarian headquarters that is located in the city was practically immobilized today, because it is not safe to move around the city, and the work of the headquarters was suspended.”

Striuk described a dire situation, saying there were no mobile telephone communications and that electricity has been cut. His comments come just hours after Ukrainian President Volodymyr Zelensky said in his nightly address on Saturday that the time until Ukraine is liberated “grows shorter” every day, and that it is “just a matter of time” before Ukraine takes back Russian gains.

“We supplied water to the city with the help of electricity, pumping stations,” he said. “The water that is available is from open wells with generators. There are about six or seven wells in the city. It is extremely dangerous, as soon as people gather for water, shelling begins there.”

Striuk, however, expressed some confidence the city would be able to hold out with some limited supplies delivered over the road.

“The evacuation is very unsafe, few people, priority for the wounded. Only an initial level of medical care is available in the city.”

In a statement, the General Staff of the Armed Forces of Ukraine claimed Russian forces had suffered losses and retreated to some previously occupied positions in the direction of Severodonetsk, but added that the Russians were continuing to conduct reconnaissance of the area to identify and strike elements of the Ukrainian armed forces.

Fedir Venislavskyi, a member of the Ukrainian parliament’s Committee for National Security, Defense and Intelligence, said the next few days “will be decisive” in the battle for Severodonetsk.

“Our forces pushed the enemy back to the positions he had previously held,” he said. “But we must understand that Russian troops are practically on the outskirts of Severodonetsk.”

Star Wars: Knights Of The Old Republic II Releases On Switch This June