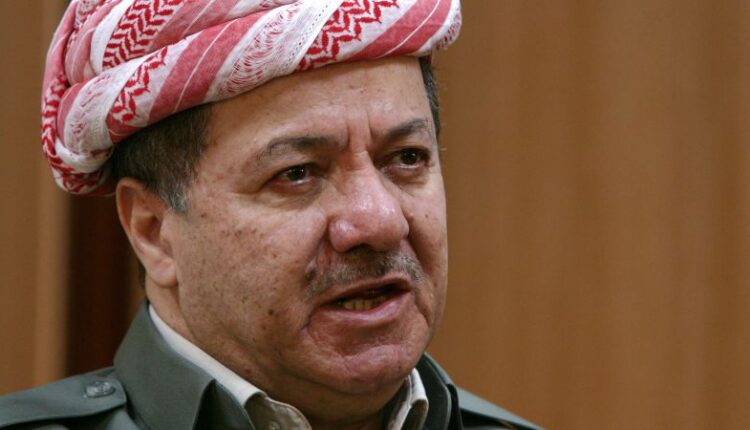 Here is a look at the life of Massoud Barzani, leader of the Kurdistan Democratic Party in Iraq.

Father: General Mustafa Barzani, was chief of the military of the Kurdish Republic of Mahabad

Leader of the Kurdistan Democratic Party (KDP) since 1979.

The KDP has an estimated 10,000 fighters and controls the northwestern part of Iraqi Kurdistan along the border of Syria, Turkey and Iran.

Barzani was born on the same day that the KDP was founded in 1946.

1961-1975 – The Kurds fight the Iraqi government in a quest for autonomy within Iraq.

1970 – Is a member of the Kurdish delegation in talks with the government of Baghdad seeking a peace accord authorizing Kurdish self-government. An agreement is reached between Iraqi government and Kurds granting some autonomy.

June 1975 – Former leader Jalal Talabani leaves the KDP to form the Patriotic Union of Kurdistan (PUK), forcing a reorganization of the KDP.

1979 – Elected president of the KDP after the death of his father.

1994 – The Kurds in northern Iraq are divided into eastern and western political factions. Barzani is named the head of the northwestern region as head of the KDP. A parallel government is established in the east under the PUK.

October 4, 2002 – Barzani and Talabani, leader of the PUK, apologize to the families of the victims of their internal war.

2003 – Becomes a member of the Iraqi Governing Council following the fall of Saddam Hussein’s regime.

June 2005 – Elected president of the Kurdish Regional Government in Iraq.

July 25, 2009 – Reelected president of the Kurdish Regional Government in Iraq with 71% of the vote.

June 23, 2014 – In an exclusive interview with CNN’s Christiane Amanpour, Barzani gives his strongest-ever indication that his region, Iraqi Kurdistan, would seek formal independence from the rest of Iraq.

June 27, 2014 – Announces that the oil-rich city of Kirkuk, and other disputed areas in Northern Iraq, are henceforth part of the Kurdish autonomous region, after the Iraqi central government fails to hold a long-awaited referendum.

December 11, 2016 – US Secretary of Defense Ash Carter makes a surprise visit to a military airfield near Mosul to discuss the next steps in the fight against ISIS with Barzani and Iraqi Prime Minister Haider Al-Abadi.

September 25, 2017 – Iraqi Kurds cast their vote in a controversial referendum to achieve independence from Iraq. Barzani was the key orchestrator in the quest for the complete Kurdish autonomy. The referendum fails.

October 29, 2017 – Barzani’s office announces that he will step down as president as of November 1. This comes after Kurds voted overwhelmingly in favor of secession the previous month.

May 28, 2019 – Barzani’s nephew, Nechirvan Barzani, is elected president, making him the second president of the Kurdish Regional Government.

June 11, 2019 – Barzani’s son, Masrour Barzani, is elected Prime Minister of the Kurdish Regional Government the day after his cousin is sworn in as president.

Is Bandai Namco Teasing The Next Tekken?