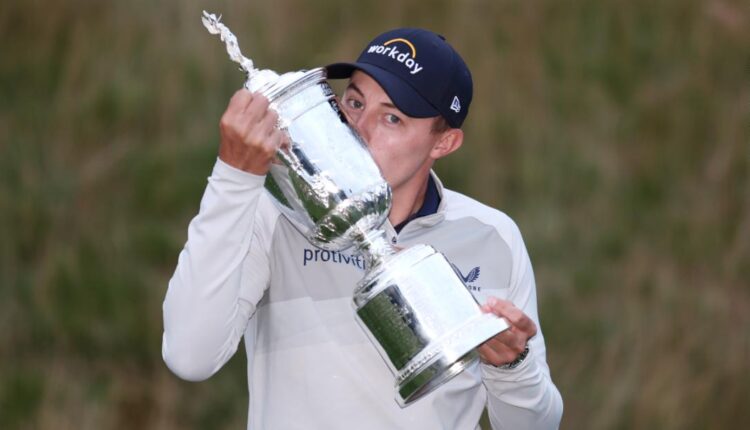 The 27-year-old edged past American duo Scottie Scheffler and Will Zalatoris by a single shot to secure victory after a rollercoaster final day.

“It was incredible,” Fitzpatrick told CNN Sport’s Don Riddell after lifting the trophy.

“It’s just like a big release, you finish the tournament and you’ve won and you realize that you’ve achieved one of your lifelong goals.

Fitzpatrick, a seven-time winner on the European Tour, has been made to wait for his first major, but he eventually won it in style.

Despite periods of wind which caused havoc on the challenging par-70 course, Fitzpatrick never scored above par over the four rounds.

His 68, 70, 68 across the first three rounds saw him arrive as co-leader alongside Zalatoris heading into the deciding day, where his third 68 was enough to claim a one-stroke win at six under par.

Like any great sporting achievement, sacrifices have had to be made along the way but Fitzpatrick says all the hard work and dedication has been worth it.

“I just want to win. Whatever it takes, for me, is what I got to do,” he added, laughing at how he recently hosted a bachelor party but didn’t attend as he was preparing for the US Open.

“I feel like what gives me the edge over other people is having that dedication, going out when no one else is and working hard and that’s what’s got me to this level.”

As well as securing a $3.15 million share of the $17.5 million total prize, the largest pot in major championship history, Fitzpatrick has also matched a very special record.

The world No. 18 is only the second player — and the first non-American — to win both the US Amateur and US Open at the same venue, having won at The Country Club in 2013.

Jack Nicklaus is the only other golfer to have achieved the feat following triumphs at Pebble Beach in 1961 and 1972.

“It’s amazing. The best golfer of all time. To share any achievement that he has done is incredible,” Fitzpatrick said, beaming.

“I’m so proud of myself to be able to achieve that and when you’re sharing records with Jack, it’s pretty special.”

Fitzpatrick was born and raised in the English city of Sheffield and credits his upbringing and close circle of family and friends with keeping him level-headed and grounded.

His mental fortitude was on full display at The Country Club last week, as were his familiar quirks.

Fitzpatrick does things differently to many golfers: he leaves the flag in when he putts and makes notes after every shot he makes.

Every shot, that is, apart from his final putt to secure the US Open.

“I didn’t even write down how close it was, but I remember it, so I’ll do that later,” he laughed.

The next major goal for Fitzpatrick is the upcoming Open Championship at St Andrews, Scotland, and the Englishman fancies adding to his collection.

“I’m delighted with one [major] but two would be through the roof,” he said, adding that he’s looking forward to celebrating his victory.

“This is the greatest achievement in my career, ever. I’m going to enjoy spending time with family and friends. Like I say, it’s just a really crazy special moment.”

Tiny Tina’s Wonderlands Is Coming To Steam This Week