Meghan, Duchess of Sussex, describes her ‘pinch me moment’ in One Young World speech back in UK 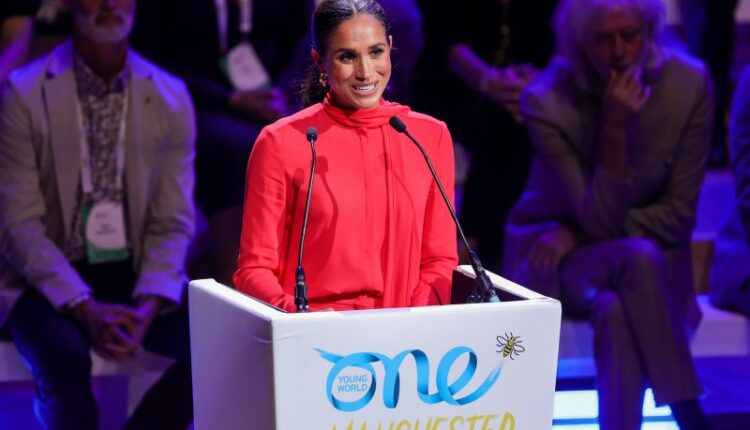 Meghan, Duchess of Sussex has described her experience of feeling self-doubt, as she spoke to a young audience in her first public address in the UK for two years.

She and Prince Harry were in Manchester, northern England, for the One Young World 2022 summit on Monday, with the duchess delivering the keynote speech. Meghan has been one of the organization’s counselors since 2014.

In her first UK public address since stepping back from royal duties in January 2020, Meghan told the audience she was “overwhelmed” when she was first invited as a counselor at the same event in 2014.

“I was probably a lot like each of you: Young, ambitious, advocating for the things I deeply and profoundly believed in and also looking around and wondering, ‘how on earth did I get here?’ Have any of you today so far had that feeling – that pinch me moment – where you just go, ‘how am I here?’”

Recalling being at a dinner with about 20 or 30 counselors, she said: “I was the girl from ‘Suits’ and I was surrounded by world leaders, humanitarians, prime ministers, an activist that I had such a deep and longstanding respect and admiration for. And I was invited to pull up a seat at the table.”

She said she was “so overwhelmed” that she kept her place card as “proof that I belonged.”

“I was so nervous. I doubted myself and I wondered if I was good enough to even be there,” she added.

“But One Young World saw in me what I wanted to see fully in myself – they saw in me just as I see in you, the present and the future.”

The four-day event aims to empower and develop young leaders from more than 190 countries to “build a fair, sustainable future for all,” according to One Young World’s website.

The Sussexes will be in Germany for the Invictus Games Düsseldorf 2023 One Year to Go event on Tuesday before returning to the UK for the WellChild Awards on Thursday evening.

Monday’s event is one of several trips the couple have made to the UK this year, including for the Queen’s Platinum Jubilee celebrations in June. During those festivities, the pair – who brought their children Archie and Lilibet – maintained a relatively low profile. The family mostly stayed at Frogmore Cottage, their home outside of London.

However, Harry and Meghan joined other members of the royal family at a thanksgiving service for the 96-year-old sovereign at St Paul’s Cathedral on June 3 – their first joint appearance since quitting as working royals. The day before, the pair watched the Trooping the Colour military parade with several other Windsors at Horse Guard’s Parade but did not join the preceding royal procession. They were also absent from the family’s appearance on the Buckingham Palace balcony, with the Queen deciding that only working royals would be included.

Prior to that trip, the Sussexes made a surprise stop at Windsor in April for a quick visit with the Queen before traveling on to The Hague for the Invictus Games.

It’s unclear if they will have enough time to see the monarch this time round. The Queen is currently vacationing at her Scottish Highlands residence of Balmoral, where she formally appointed the new UK prime minister on Tuesday.

Sign up to CNN’s Royal News, a weekly dispatch bringing you the inside track on the royal family, what they are up to in public and what’s happening behind palace walls.

Australia’s tough flu season could spell trouble for the US this winter, especially with Covid-19 in the mix