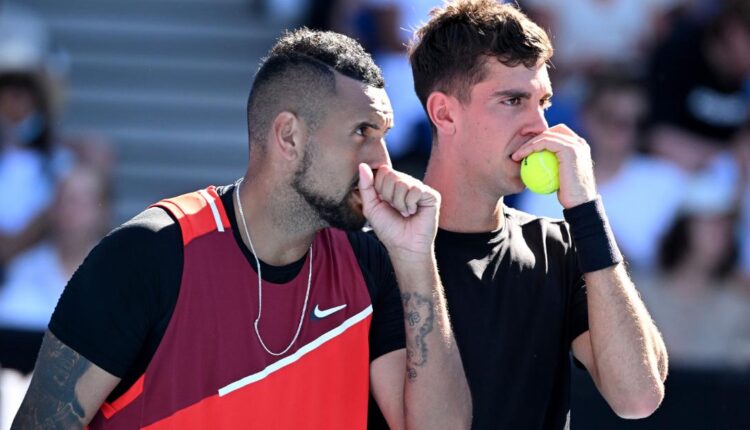 If somebody then corrected you and said that the din was actually coming from a singles tennis match at the Australian Open you might have thought perhaps Ashleigh Barty or Rafa Nadal were playing.

In fact, the racket was coming from an Australian Open men’s doubles quarterfinal. The headline act? ‘Special K,’ otherwise known as Nick Kyrgios and Thanasi Kokkinakis.

The Australian wildcard duo have whipped fans into a frenzy throughout their unlikely journey into the semifinals of their home grand slam, peaking with a raucous 7-5 3-6 6-3 quarterfinal victory over Tim Puetz and Michael Venus at a packed Kia Arena on Tuesday.

Hype men to the crowd, chest bumps, Cristiano Ronaldo tribute acts — to highlight the tennis alone would not do justice to the spectacle the Australian pair have provided.

Arguably doubles has an awkward place in the tennis world — with singles events consistently taking precedence in both prize money and coverage — which makes the attention and adulation that the duo are garnering all the more impressive.

Yet for Kyrgios and Kokkinakis, their relationship with the crowd is a symbiotic one, and forms the crux of their motivation to perform.

“This Australian Open, honestly for us, it’s more about the people — playing for them is more important than our doubles success, Kyrgios said.

“We haven’t drawn up any goals of what we wanna achieve this year in doubles, I just wanna play and give the people of Australia and the Australian Open a show and genuinely try and grow the sport of tennis.

“That’s why I’m playing, and I know Thanasi is just enjoying it — this is the most fun we’ve ever had on the court.

“The thrill for us is honestly walking out there. This sounds stupid but we worry what happens in the match after,” Kokkinakis added.

“Seeing the support we’ve got and then the crowd going nuts every time we go out there and how much they’re enjoying it, that gets us going and gets us motivated to do better for them.”

A perfect encapsulation of the pair’s connection with the Melbourne crowd — as well as Kyrgios’ enigmatic personality — came early in the first set of the quarterfinal when the 26-year-old ferociously lashed a returning dead ball into the crowd after a let serve.

The ball struck a child, bringing him to tears, with a mortified Kyrgios covering his mouth in shock.

After a brief chat with Kokkinakis, Kyrgios jogged over to the stand to hand over a token of apology to a boy who — though admittedly still a little watery-eyed — now brandished a smile, a new racket, and a monster of a story to share at school.

The subsequent warm ripple of applause from the crowd was a response the oft-dubbed ‘bad boy of tennis’ has not always received.

On court antics have at times marred an undoubtedly talented career — an immaturity he admits to — with Kyrgios telling CNN last year that he had a “love-hate” relationship with the sport.

Yet this doubles run looks to have really fired up Kyrgios and there can be no doubt which side of “love-hate” this year’s crowd falls on — especially the swathe of young fans that have packed into the duo’s games at Melbourne Park.

“There’s no way around it, me and Thanasi are definitely role models to the youth in Australia, we obviously attract that crowd,” Kyrgios said.

“I know that over the years i haven’t been the best role model but I was just learning how to deal with everything and i think now at 26 i’ve matured and I definitely realized that a lot of young kids and people — even people that are low on confidence — they do look towards us when we go out there.

“We’re not special people, we’re normal humans that you might see walking in Australia … I think we’re just relatable, that’s what’s the best thing about it.”

For the 26-year-old Krygios, difference is the keyword to his place in the sport.

“Tennis has always had personalities, I’ve said this before but I think they just struggled to understand that there are different ways to go about it.

“You’ve got Roger Federer and these guys that are just once in a generation athletes — I can’t be like that, we’re not like that, there has to be people that are a little more relatable.”

Ability aside, Krygios and Kokkinakis are putting on a once in a generation spectacle at the Australian Open — just spare a thought for Melbourne’s lovers of peace and quiet should they go all the way.