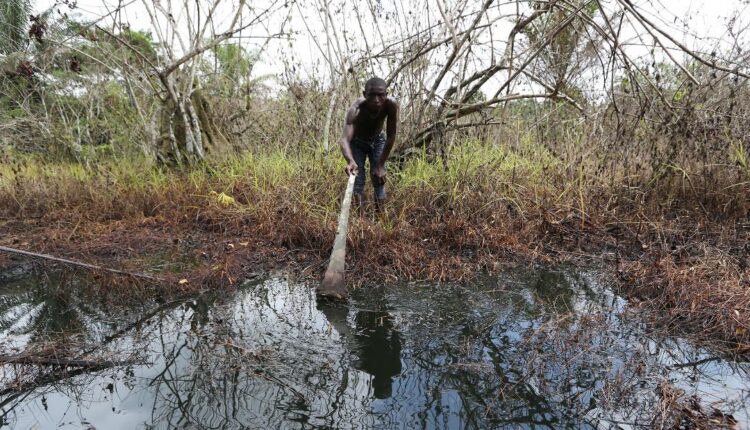 Williams, who is the executive director of the Environmental Rights Action/Friends of the Earth Nigeria, successfully convinced the Court of Appeal in the Hague that Shell plc was responsible for the activities of its subsidiary in Nigeria — Shell Petroleum Development Company of Nigeria (SPDC) — and for oil spills that ravaged local farmlands.

The suit against Shell Nigeria was brought by four farmers from the Goi and Oruma communities in the country’s oil-rich but impoverished Niger Delta region, who said their farms were left in ruins after major spills from underground pipelines.

The decision to allow Shell plc, formerly known as Royal Dutch Shell plc, to be sued in this jurisdiction set a precedent as it was the first time the Dutch parent company was sued in its home country for the actions of its foreign subsidiary, SPDC.

Shell Nigeria (SPDC) was eventually held liable for the oil spills and ordered to pay damages to the farmers in a January 29, 2021, ruling by the Court of Appeal of the Hague. SPDC was also ordered to carry out an intensive clean-up of the damage to the communities.

Williams was on Wednesday awarded the Goldman Environmental Prize for his work in holding the company accountable for the environmental damage.

He is one of seven global winners of the prestigious award, announced Wednesday morning, to honor grassroots, environmental activists. The prize is awarded each year by The Goldman Environmental Foundation, with ceremonies in San Francisco and Washington, DC.

“These seven leaders give us a reason for hope and remind us what can be accomplished in the face of adversity,” the Vice President of the Goldman Environmental Foundation, Jennifer Goldman Wallis, said in a statement.

Williams attributed his win to “the grace of God” in a video call with CNN from Lagos, Nigeria.

Shell had argued for the case to be tried in Nigeria while rejecting liability for the spills, which it said were caused by sabotage of its subsidiary’s pipelines. In 2013, a Dutch lower court ruled that the Shell parent company could not be held responsible for violations committed by its Nigerian division.

However, Williams says he and his legal team pushed on because they had established that the parent company in the Netherlands had “authority flow,” to the subsidiary — Shell Nigeria — and therefore could not be exempt from its decisions and operations.

“That was what gave us the confidence to appeal against the judgment, and the Court of Appeal agreed with us that the district court was wrong,” Williams said.

“The first ruling that we got favorably was on jurisdiction. The Dutch High Court sitting in The Hague ruled that they had jurisdiction to hear the cases from Nigeria. That was the first hurdle that we scaled through,” he said.

After the final ruling in January last year, Shell said in a statement: “We continue to believe that the spills in Oruma and Goi were the result of sabotage. We are therefore disappointed that this court has made a different finding on the cause of these spills and in its finding,” noting out that sabotage, oil theft, and illegal refining are “a major challenge” in the region.

Shell Nigeria spokesman Bamidele Odugbesan told CNN the company had agreed a settlement with the four farmers from Goi and Oruma communities after last year’s ruling, and that representatives are “working amiably on the actualization of the judgment.”

Hundreds of oil spills every year

Shell is the largest oil operator in the Niger Delta, Africa’s largest oil-producing region. Its residents face high poverty rates and a largely degraded environment, owing to hundreds of spills every year.

“We have groundwater polluted with benzene 900 times above WHO level, we have farmlands with poor yields, rivers that are barely fishable, neonatal deaths numbering thousands yearly as a result of spills. We have reduced neuroplasticity of the brain as a result of oil pollution,” Niger Delta activist Saatah Nubari told CNN.

“The Niger Delta is a graveyard of the living and we will never know how much harm has been done until we audit the entire environment,” Nubari also said.

For many years, Shell has attributed most spills to theft and sabotage by locals.

“Over 95 percent of the spill incidents in our operations are caused by sabotage,” Odugbesan, the Shell Nigeria spokesman, told CNN.

“Throughout our operations globally, in 2021, it’s only in Nigeria that we recorded crude theft. And this has implications on our cost. When our facilities are tampered with and there’s a spill, we spend money to stop the spill, fix our facility, clean up and remediate the environment,” Odugbesan said.

Nubari believes oil companies are “untouchable in Nigeria and unaccountable and that is why communities and individuals approach foreign courts to get justice.”

Williams agrees it is difficult to hold multinational companies accountable through government agencies in Nigeria.

Shell Nigeria spokesman Odugbesan denied that Shell is untouchable in Nigeria and stated that the company paid out around 50 billion naira in 2021 (around $111 million as of last year) after being sued by another community.

For Williams, his lengthy David-versus-Goliath legal battle has come with highs and lows.

“In 2008, I was arrested on a Shell facility when I went to expose that Shell was still flaring gas, despite a 2005 court ruling which ordered them to stop gas flaring in Iwhrekan community, in the Niger Delta,” he told CNN.

Williams lauded other court decisions that have signaled wins for the Niger Delta’s aggrieved communities.

“After January 29th, there have been a lot of positive court decisions within and outside Nigeria, some with massive monetary awards. There are great positives that these judgments have brought to protect the Niger Delta’s environment.”