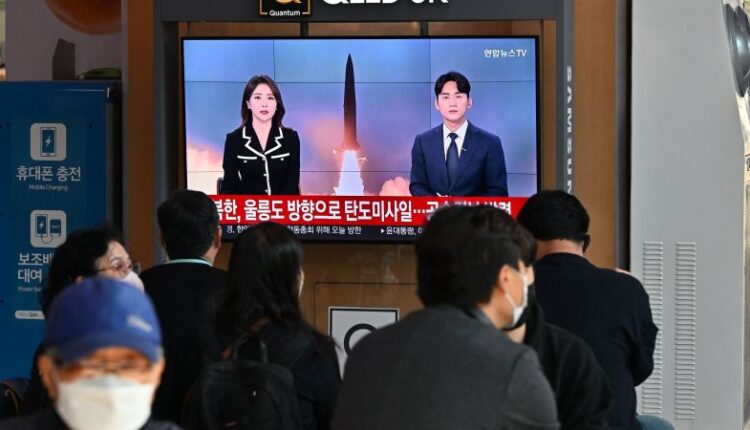 North Korea fired at least 10 missiles to the east and west of the Korean Peninsula on Wednesday, including one that landed close to South Korean territorial waters for the first time since the 1945 division, South Korean officials said.

A South Korean defense official said the missiles landed to the west of the peninsula in the Yellow Sea, known as the West Sea in Korea, and to the east in the Sea of Japan, also known as the East Sea.

At an emergency National Security Council (NSC) meeting, Yoon “ordered that a stern response be swiftly taken so that North Korea’s provocation pays a clear price,” according to South Korea’s presidential office.

In an immediate response, South Korea launched three air-to-surface missiles from F-15K and KF-16 fighter jets on Wednesday morning, according to JCS.

JCS said the South Korean Air Force targeted international waters north of the NLL at an equal distance to that which the North Korean missile had earlier landed south of the line.

“Our military’s precise strike showed our will to firmly respond to any North Korean provocations including short-range ballistic missile, and our capability and readiness to precisely target the enemy,” JCS said.

North Korea is “fully responsible” for the situation as they are the ones continuing to provoke despite warnings, JCS added.

Wednesday’s launch is North Korea’s 29th this year, according to a CNN count.

The aggressive acceleration in weapons testing has sparked alarm in the region, with the US, South Korea and Japan responding with missile launches and joint military exercises.

The maneuvers involve 240 aircraft and “thousands of service members” from both countries, according to the US Defense Department.

US Defense Secretary Lloyd Austin is scheduled to meet with his South Korean counterpart Lee Jong-sup at the Pentagon on Thursday.

Experts have previously told CNN that North Korean leader Kim Jong Un could be sending a message by deliberately showcasing the nation’s arsenal during a period of heightened global conflict.

The latest tests also come after the head of the United Nations’ nuclear watchdog warned last week that Pyongyang could be preparing for a nuclear test – its first since 2017 – with satellite imagery showing activity at its underground nuclear test site.

Kishida also called for a National Security Council meeting to be held as soon as possible due to the rising tensions on the Korean Peninsula.

No damage to aircraft or vessels has been reported at this time, and it is possible the ballistic missiles flew on an irregular trajectory, he added.