North Korea’s Kim Jong Un wants the world to know he still matters. Seven missile tests in a month may prove it 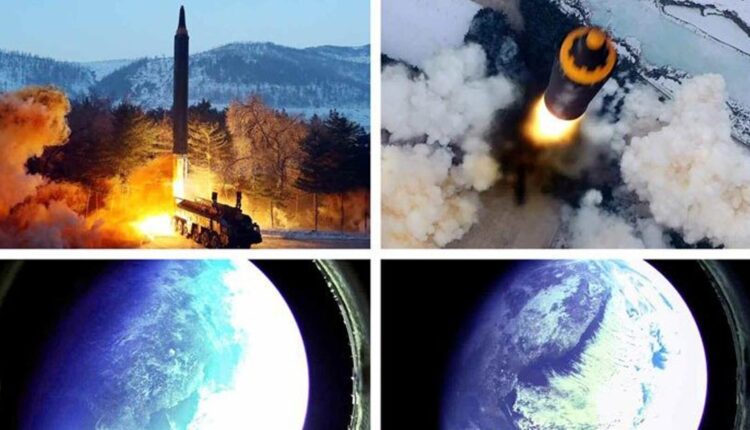 According to analysts, seven North Korean missile tests in the first four weeks of 2022 suggest the country’s leader, Kim Jong Un, is both striving to meet domestic goals and show an increasingly turbulent world that Pyongyang remains a player in the struggle for power and influence.

“By threatening to destabilize Asia while global resources are stretched thin elsewhere, Pyongyang is demanding the world pay it to act like a ‘responsible nuclear power,'” said Leif-Eric Easley, associate professor of international studies at Ewha Womans University in Seoul, South Korea.

But all fall into Kim’s pledge to make North Korea a power that can stand up to not only to its southern neighbor, but also to foes further afield, such as the United States. The IRBM that was tested Sunday, named in state media as a Hwasong-12 type missile, could have the range to hit the US island territory of Guam in the Pacific Ocean. Images released by North Korean state media, purportedly taken using a camera installed on the Hwasong-12, appear to show the missile in space looking back down at Earth.

Kim has reason to be concerned about a possible government change in Seoul in March’s presidential election. Conservatives behind presidential candidate Yoon Suk Yeol have a chance to unseat the current ruling democrats, fronted by Lee Jae-myung, who would succeed party colleague President Moon Jae-in if elected.

Analysts say a Yoon-led government could be expected to take a much harder line against the North compared to one led by Lee.

Yoon even planted the idea that South Korea could strike first against a perceived threat from the North, before the South might suffer a catastrophic loss.

“I think it is a very important attitude for us to have,” Yoon said last week.

And while Moon has held summits with Kim, a Yoon government could very well just ignore the North Korean leader’s regime, according to Andrei Lankov, a professor at Kookmin University in Seoul.

“Conservatives are supporters not so much of a tough position in relations with North Korea as of the maximum disregard for the very fact of the existence of another Korean state,” Lankov wrote on a blog for the Valdai Club, a Russian think tank.

Kim certainly got the attention of Moon with Sunday’s IRBM test.

The South Korean President said in a statement that the IRBM firing could be considered as a signal the Kim regime is preparing to scrap its moratorium on intercontinental ballistic missile (ICBM) and nuclear testing.

That moratorium has largely kept North Korea out of the international spotlight, but longer range missile tests could reverse that trend.

As for the US, President Joe Biden’s administration has largely put North Korea on the back burner, with foreign policy issues like China, Taiwan and most recently Ukraine dominating attention along with the coronavirus pandemic.

Washington’s responses to North Korean launches in January are nowhere near its reaction to Pyongyang’s provocations in 2017, when Donald Trump was the US President.

On Sunday, a US official told reporters Washington was open to talks with Pyongyang, though the official said those would begin at a level lower than a direct meeting between Biden and Kim.

That has to be frustrating for the first North Korean leader to meet face-to-face with a sitting American President not once, but three times.

“For better and for worse, Biden is showing no fire and no fury,” Easley said.

Leading up to his summits with Trump, analysts noted how Kim had finally succeeded in getting a seat at the table, a position he leveraged by testing intercontinental ballistic missiles (ICBM) that could theoretically reach the continental US. But when that seat did not yield any concessions from Washington, North Korea gradually resumed missile tests, albeit of a much shorter range.

Last year, Biden’s first in office, North Korea staged eight tests — none in the range of an ICBM. But Sunday’s IRBM tests indicates that capability is still in the North’s inventory, and analysts say testing one now could be a big blow to a Biden administration already rocked by perceived foreign policy missteps like the US pullout from Afghanistan and the threat of war in Europe posed by Russia massing troops on its borders with Ukraine.

Those situations are bound to play some role in congressional campaigns that may see Biden’s Democrats lose majorities in both the US House and Senate and impact the President’s chance of achieving any of his goals in the remainder of his term.

While some analysts suggest North Korea’s current spate of testing leaves the door open for dialogue with Biden, others say it’s a matter of when, not if, Kim will order the testing of stronger weapons.

They say the Kim regime always does what it says it will do. And if you look at the goals set forth at North Korea’s 8th Party Congress in January 2021, Kim has begun to tick the boxes.

The first goal was to test a hypersonic warhead. That’s been done, most recently this month.

Another goal was testing a submarine-launched missile. That was achieved in October.

Yet another goal was to “to develop tactical nuclear weapons which can be used for various missions,” according to North Korean state media. One of this month’s tests has been of “tactical missiles.”

As an ICBM was on that list too, a test is “just a matter of time,” said Duyeon Kim, adjunct senior fellow at the Center for a New American Security (CNAS).

The North has previously tested an ICBM, but analysts say it could try to test a solid-fueled version. Solid-fueled ICBMs can be readied for action quicker than the liquid-fueled ones fired by Pyongyang to date.

“It doesn’t matter what the US does or does not do … Pyongyang is squarely focused on meeting its nuclear weapons milestones,” she said.

With the Winter Olympics starting in just days in the capital of North Korea’s main ally, China, the world may see Kim take a breather from testing and let his friends in Beijing bask in the international attention.

But Pyongyang picking up the weapons testing pace again after the Games may suit Beijing just fine.

“For China, as North Korea’s military power increases, the US has to pay more attention to the Korean Peninsula, so it can be expected to have the effect of distracting attention on Taiwan in this region,” said Park Won-gon, associate professor in North Korean studies at Ewha Womans University.

If that doesn’t give Kim a seat at the table, it at least gives him a foot in the door — and all the more reason to keep that door swinging wider.

Kyiv: Defiance, patriotism and cool heads on show on the streets of Ukraine’s capital