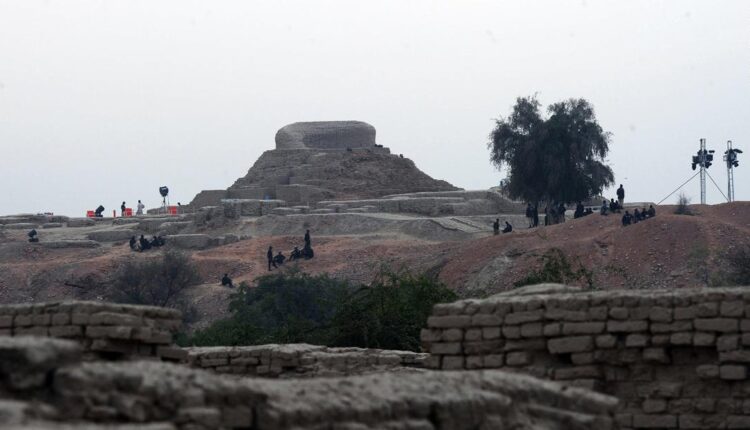 
Moenjodaro (also styled Mohenjo-daro), a World Heritage site in the Indus River Valley 508 kilometers (316 miles) from Karachi, was built in the Bronze Age, some 5,000 years ago.

“Unfortunately we witnessed the mass destruction at the site,” reads a letter from the Cultural, Tourism, & Antiquities Department of Singh state sent to UNESCO and signed by curator Ihsan Ali Abbasi and architect Naveed Ahmed Sangah.

The letter adds the site was being used as temporary accommodation for surrounding residents whose own homes had flooded.

“On humanitarian grounds we gave them shelter in our quarters, parking areas, shops (and) ground floor of the museum,” the letter explains.

Currently, an estimated one-third of Pakistan is underwater after monsoon downpours combined with water from melting glaciers.

Most of Moenjodaro’s structures, which were discovered in the 1920s, are above ground and susceptible to environmental damage. Images included in the letter from the site’s guardians show collapsed brick walls and layers of mud covering the site.

The letter explains some of the immediate actions the site team has taken to mitigate the flood damage, like bringing in water pumps, repairing brickwork and cleaning drains.

Several walls collapsed amid the flooding.

But it’s clear that these measures will not be enough.

Abbasi and Sangah ended their letter by asking for 100 million Pakistani rupees ($45 million) to cover the costs of full repairs.

UNESCO has responded to the request for help, allocating $350,000 from its emergency fund for damaged historic sites in Pakistan during UN Secretary General António Guterres’s visit to the flood-ravaged country this week.

The funds will go to Moenjodaro and other sites including the Sehwan folk and craft museum, the Amri Museum — which looks after another ancient site in Singh state — and the historical monuments at Makli.

While the sum is far less than will be needed to fully repair and maintain the sites, it will pay for urgent work while both UNESCO and the Cultural, Tourism, & Antiquities Department consider the best way forward.

Sadly, the conservators of Moenjodaro have known for some time that flooding could pose a serious risk to the site.

Its official UNESCO listing notes that Singh state — which is officially tasked with maintaining Moenjodaro — has flagged the issue before and warned that “a breach of the dam upstream would cause catastrophic damage.”

Moenjodaro’s significance as a historical and architectural site cannot be underestimated. When it was added to UNESCO’s register in 1980, the organization wrote that Moenjodaro “bears exceptional testimony to the Indus civilization,” comprising “the most ancient planned city on the Indian subcontinent.”

During its heyday, the city was a bustling metropolis. There were markets, public baths, a sewage system, and a Buddhist stupa, mostly constructed out of sun-baked brick.

Workers rushed to cover as much of the site as possible with protective covers.

In their letter, Abbasi and Sangah express concern that Moenjodaro could be added to the list of UNESCO sites in danger, which the preservation body updates periodically to highlight historic places that are at severe risk of ruin.