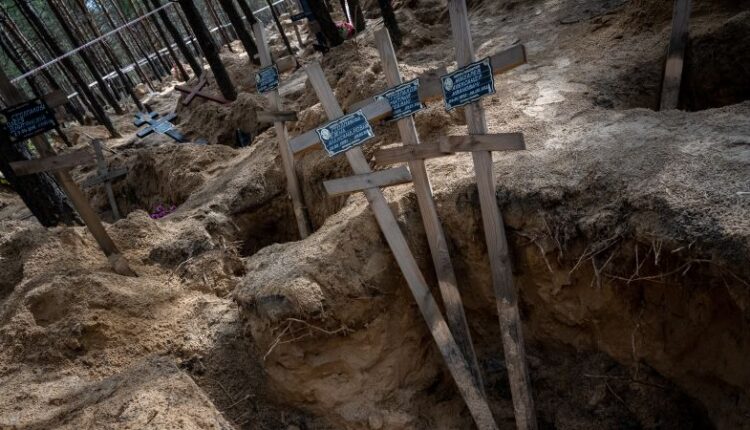 Mykhailo Yatsentiuk left the basement to make tea for his granddaughter just as the bomb struck. When he came to his senses a half hour later the entire middle section of his apartment block had been destroyed; the basement where he had been sheltering with his family and neighbors was engulfed in flames.

The Ukrainian government says 54 people died at the apartment complex on 2 Pershotravneva street in Izium, eastern Ukraine, on March 9, almost half of the building’s residents. Entire families were killed in the attack, including the Yatsentiuks, Kravchenkos and Stolpakovas.

Their fates remained largely unknown until a few weeks ago when Ukrainian forces pursuing a counter-offensive reclaimed Izium after six months of Russian occupation, revealing a mass burial site on the outskirts of the city.

Most of the residents of 2 Pershotravneva were buried there among more than 400 graves, few with identifying marks other than numbers daubed on rough wooden crosses.

After speaking to a survivor, ex-residents and family members, and reviewing photos and video taken in the aftermath of the attack and following the town’s liberation, CNN can now tell the story of what happened at 2 Pershotravneva on that day.

All that was left of the apartment block were two towers on either side with a smoking pile of rubble in the middle.

Months later, after the liberation of Izium, Dmytro Lubinets, the Ukrainian Parliament’s Human Rights Commissioner stood in front of the ruins and declared the deaths of those killed there “as a result of an airstrike by Russian troops” part of “a genocide of the Ukrainian nation.”

Local residents say that after the airstrike, Russian forces attacked the building with tanks, which were firing from across the river.

When the smoke cleared, walls, floors and ceilings were torn off, revealing the homes of the people who had lived there. Many of them were now dead, buried in their own basement where they had been sheltering.

Yatsentiuk lost seven members of his family that day – his wife Natalia, aunt Zinaida, daughter Olga (also known by the diminutive Olya) Kravchenko and her husband Vitaly Kravchenko, their son Dima who was 15, Oleksii who was 10 and their 3-year-old daughter Arishka, the grandchild Yatsentiuk had gone to make tea for.

“I started shouting Olya, Natasha, Vitaly… No one answered,” he said. “When I got upstairs [to the ground floor], I sat down and started crying, screaming. Oh God.”

Izium, with a pre-war population of over 40,000 is a small town, the kind where primary school classmates stay friends for life and families live in the same building for generations. Anastasiia Vodorez and Elena (Lena) Stolpakova grew up together.

Vodorez describes the Stolpakovas as a “very happy, tight-knit” family. “Friends always gathered at their place, because we had a lot of fun there,” she told CNN from the Czech Republic, where she has lived for the past four years.

When Russia’s invasion of Ukraine began, friends urged Lena to leave Izium but her father Aleksander refused to leave their home at 2 Pershotravneva street. When friends learned that Lena’s house had collapsed due to shelling, they decided that “until we found her, she was alive for us.”

Recovery efforts began at the end of March; the first bodies were pulled out a little less than a month after the attack. “It was clear then that people died in families,” said Tetiana Pryvalykhina, another resident of 2 Pershotravneva, who had left the city but lost her “deeply religious” mother Liubov Petrova in the airstrike.

Instead of the basement they’d used as a bomb shelter there was now a crater. “People were torn to pieces, my mother was torn to pieces,” Pryvalykhina said.

Local rescue workers worked under the occupying Russian forces to find and bury the bodies. Pryvalykhina’s sister Victoria went to the site every day in hopes of finding their mother. “People were faceless. It was very difficult to recognize. They carried out the bodies without a head, carried out the arms and legs separately,” Pryvalykhina recalls her sister telling her.

The Stolpakova family was finally found in May. “The whole family was in the basement: Lena, her husband Dima, their two daughters [Olesya and Sasha], Lena’s parents Aleksander (Sasha) and Tania, Lena’s younger sister Masha, and also there was Lena’s grandmother Liuda,” Vodorez said. The only surviving member of the family was Lena’s other grandmother, Galia, who lived across town.

All but 12 of the people that died in that apartment building were interred at a mass burial site in a pine forest near the town, according to Yatsentiuk. Many families said they weren’t allowed to re-bury or visit their loved ones’ graves while the city was under Russian occupation.

Before it was destroyed by falling bombs, 2 Pershotravneva was a building known in town for its sense of community and well-kept flower beds. It was a place where younger generations hosted barbecues and older generations gathered to chat.

“The house was always full of children’s laughter, there were always a lot of children on the playground,” recalled Pryvalykhina of her former home.

She left Izium with her daughter on March 4, just five days before the airstrike that killed her mother. Petrova hadn’t wanted to leave her home of more than 30 years. She was one of the last to be pulled out of its wreckage.

Most graves at the mass burial site are marked with plain wooden crosses; a few have flowers or wreaths laid upon them.

The Stolpakova family graves were some of the few with names and birth and death dates written on them. Liubov Petrova’s grave is marked just with the number 283. Others may remain anonymous forever.

Yatsentiuk left Izium after he buried his family in April, but has since gone to visit on a humanitarian mission. Though the Ukrainians are now back in control, there’s still no electricity in the city and people there lack basic supplies like food and medicine.

He stopped by 2 Pershotravneva on September 30. By then, the rubble had been cleaned up. All that remained were the skeletons of the two towers and flower beds with memorials for the people who died here.

“I visited my house several times,” he said. “This time I just stood and prayed.”

After Hurricane Ian left Cuba in the dark, protestors took to the streets