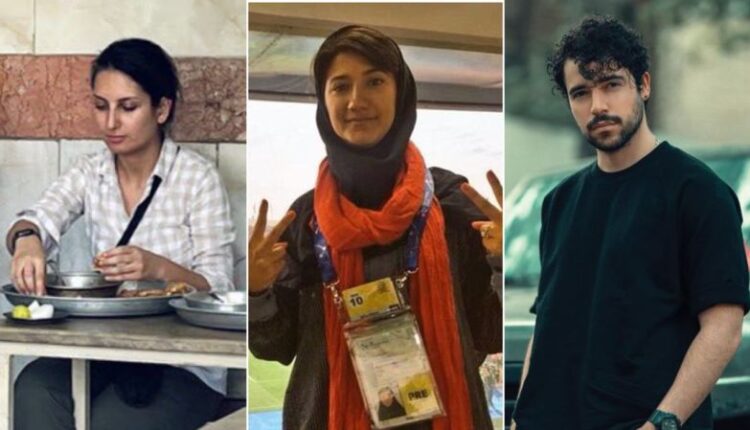 As the protest cries of exasperated Iranians continue to ring through the streets of the country, reflected in videos posted on social media, here are a few of the key stories that have shaped the movement on the one-month anniversary of Mahsa Amini’s arrest.

To date, more than 1,000 people have been arrested across Iran, according to state news agency IRNA. At least 40 journalists are among those arrested, according to the Committee to Protect Journalists, and a handful of athletes have been either arrested or detained for questioning.

Below is a closer look at the faces and stories behind just three of those arrested, and in some cases released, in connection with the protests.

Shervin Hajipour’s emotional song “Baraye,” which in English translates to “For…,” has been watched by millions across the globe.

The poignant two-and-a-half-minute ballad is based on tweets composed by Iranians expressing their anger and frustration with the government. Hajipour despondently sings about grievances that range from “for dancing in the street”, “for yearning for a normal life ” to “for the children who pick through the trash in search of their dreams.”

The young up-and-coming singer could not have expected just how much of an impact his song would have.

Hajipour posted the video of himself singing “Baraye” on Instagram on Tuesday September 27 and was arrested two days later. The song was viewed over 40 million times on his Instagram page before he took it down on the day of his arrest.

The 25-year-old singer was summoned to a police station over questioning for “encouragement to protest,” according to Iranian news agency Entekhab.

In the days following his detention, Hajipour deleted his Instagram page altogether, but his song had already gone viral and Iranians called upon each other to keep sharing the song to amplify his voice and, as a result, their grievances.

“Baraye” soon became an anthem for the worldwide protests and rallies held on a day of solidarity dubbed “Freedom Rally for Iran.” On October 1, crowds of Iranians around the world in over 200 cities, including Melbourne, Tokyo, Brussels, Paris, London, Los Angeles and Toronto, marched through the streets with some people singing along to the lyrics of the song.

People started calling for Hajipour’s song to be nominated for a Grammy in the “Best Song for Social Change” category. The newly created award “recognizes a song that has had profound social influence and impact,” and “that responds to the social issues of our time and has the potential for positive global impact,” according to the Recording Academy.

On Monday, “Baraye” received 95,000 of the 115,000 submissions for the new Grammy Award, according to a statement from the Recording Academy.

“The Academy is deeply moved by the overwhelming volume of submissions for Shervin Hajipour’s ‘Baraye’ for our new Special Merit Award, Best Song for Social Change,” Recording Academy CEO Harvey Mason Jr. said in a statement.

“The Academy steadfastly supports freedom of expression and art that’s created to empower communities in need. Because music serves the world, and the Recording Academy exists to serve music.”

The singer was released on bail on October 4, according to state-aligned news agency Tasnim, and now faces charges of spreading propaganda against the regime and encouraging and inciting people to acts of violence, according to his attorney, Majid Kaveh. Hajipour’s sister posted on social media that her brother is at home spending time with his family.

“I’m infinitely grateful for all your kindness towards me during this time,” the singer wrote the day he was released in a social media post on his newly re-activated Instagram. “I came to say that I am doing well.” Hajipour wrote about how he was disappointed that his song has become politicized.

“I won’t be a puppet to the people who don’t care about me, you, and this country,” he wrote.

A week later, Hajipour addressed fans in a video message on an Instagram post pleading Iranians to treat each other like family during these trying times. “After all, we are all from the same soil and blood … and I would like it if the authorities, particularly during these conditions, approach people, who are in similar situation like me, like parents do with their children,” he said.

The video message raised concerns among skeptical Iranians that Hajipour’s statement was forced by Iranian authorities because of an unidentified man sitting in the backseat of the car where he had recorded his video.

Iran’s Deputy Interior Minister for security and police Seyed Majid Mirahmadi rebuked these claims saying that ever since the singer’s release from detention, any videos and claims he’s made have been on his own accord, adding that “he was not forced to publish any videos of himself,” according to the country’s semi-official ISNA news agency.

The Iranian journalist who broke the news of 22-year-old Mahsa Amini’s death is still under arrest and awaiting clarification on the charges made against her, according to her husband Mohammad Hossein Ajorloo.

Covering the municipal beat, Hamedi went to Tehran’s Kasra hospital where Amini was being treated and where her family were gathered. She then tweeted a photo on her since-suspended Twitter account of Mahsa’s father and grandmother crying and embracing each other in the halls of the facility. Amini died that same day, September 16.

A few days later, after protests broke out in outrage over Amini’s death, agents of Iran’s Ministry of Information raided Hamedi’s home and arrested her, saying they had a warrant for her arrest without providing further details, her husband Ajorloo explained on social media.

“Although they showed us some papers, they did not allow us to read them,” Ajorloo said.

The agents searched the couple’s home and seized all their electronic devices, including mobile phones and laptops. “Contrary to the law, they did not hand over the second copy of the house inspection report to us,” Ajorloo explained.

Niloofar was then taken to Evin Prison, where her husband said her case was being investigated. Tehran’s Evin Prison is a notoriously brutal facility where the regime incarcerates political dissidents and is exclusively designated for prisoners managed by Iran’s Intelligence Ministry.

On October 2, Ajorloo said his wife called him from prison to say that she was out of solitary confinement where she passed the time practicing yoga, but was not allowed to elaborate on her condition any further.

On her 13th day of incarceration, she told her husband that she was doing well, sharing a cell with eight other female detainees, he shared on social media.

Ajorloo says that he still has no information about his wife’s case and has no idea if or when she will be released.

“The frequent calls from Shargh Daily newspaper readers to our editorial office inquiring about Niloofar’s well-being, how they get choked up on the phone line, is a sign that she was the voice of the people,” Shargh editor Hemmati said in her op-ed. Seemingly addressing a court judge she writes, “we are journalists Mr. Judge, allow us to fearlessly and without the fear of being labeled as political, with these laughable yet sad salaries, to be happy that we are relaying the people’s voice.”

Hemmati ends her piece by saying that journalists are waiting for the day when they can truly believe that they will not be threatened to tell the truth.

In recent days, Hamedi’s husband has started sharing intimate photos of the couple on his social media, speaking of his longing and concern for his wife.

“Niloofar always says that we should take pictures of hardships so that we can remember how difficult it was to achieve happiness,” Ajorloo wrote in a tweet sharing a photo of what appears to be the pair camping. “This photo is one of those moments; The night before the climb up Sabalan [mountain], when Niloofar suffered altitude-sickness and I didn’t know what would happen tomorrow,” Ajorloo writes. “These days, however bitter and difficult, will pass, and the day of the great celebration of freedom is coming.

Hamedi has been imprisoned in Evin prison for over 20 days, waiting alongside several other jailed journalists, activists and human rights lawyers who were arrested during the most recent protests.

Iranian security forces arrested a woman after a photo of her and another woman eating at a Tehran restaurant without their head scarves was widely circulated online, one of the women’s family members said in a statement.

The photo, which first emerged on social media on September 29, shows two women having breakfast at a type of cafe that, like most coffeehouses in Iran, is traditionally patronized by men.

One of the women in the photo, Donya Rad, was arrested shortly after the photo was published online. CNN spoke with her sister who said security agencies contacted Donya, summoning her to explain her actions.

“After visiting the designated place she was arrested, after a few hours of no news, Donya told me in a short call that she was transferred to Ward 209 of Evin Prison,” her sister said in a post on social media.

Donya’s sister tweeted that her sister was released from prison last Sunday, over a week after she was initially detained. “I am grateful to the friends who understood us and supported us,” she wrote.

In recent weeks, actions like this – in which women defy religious and cultural norms in Iran – are no longer isolated incidents. Women young and old are seen walking through the streets without their headscarves and in some instances, dancing with their headscarves in their hands.

CNN has reached out to Iranian authorities about the alleged arrests.