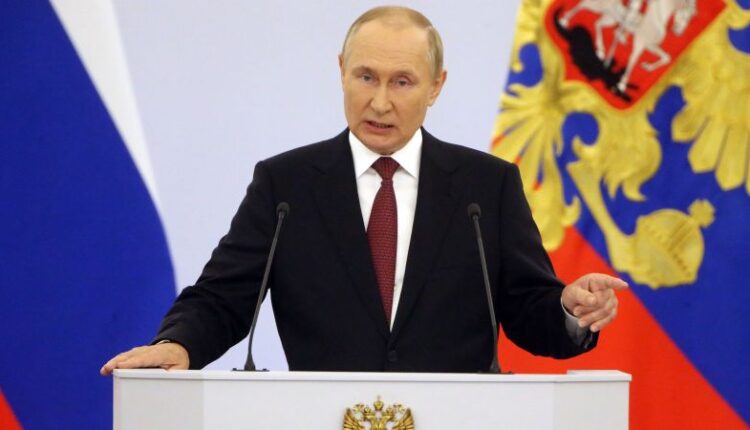 Russian President Vladimir Putin said Friday he had “no regrets” over his deadly missile attacks on civilian targets across Ukraine earlier this week, but said there was no need for more “massive” strikes for now.

The wave of missile attacks on cities across Ukraine began on Monday in response to a blast on a strategically vital bridge connecting the annexed Crimean Peninsula to Russia over the weekend. It’s unclear what caused the explosion, but Putin on Monday blamed it on Kyiv and called it a “terrorist attack” that could not be left unanswered.

The intense bombardment that followed over the next two days killed at least 19 people and leveled civilian targets across the country, drawing global outrage. The strikes also caused major damage to power systems across Ukraine, forcing people to reduce consumption during peak hours to avoid blackouts.

Putin said that while he did not regret the strikes and believes that Russia’s actions were correct, he did recognize that “what is happening now is unpleasant.”

Putin also defended his partial mobilization of Russians that began in September, telling reporters it is expected to end in two weeks and that some 222,000 troops had already been drafted into the army.

The mobilization got off to a chaotic start last month, sparking rare protests throughout the country. Hundreds of thousands of people – mostly fighting-age men – fled Russia, pouring into neighboring countries like Georgia and Kazakhstan to avoid conscription.

Putin also said that Russia does not seek to “destroy” Ukraine, as Ukrainian President Volodymyr Zelensky and Western leaders have previously alleged. His comments come seven months after Russia launched a full-scale invasion and as Moscow attempts to annex four Ukrainian regions in violation of international law.

The Russian leader was speaking at a rare news conference in Astana, Kazakhstan, where Putin had traveled for a meeting of the Commonwealth of Independent States, a regional intergovernmental organization made up of former Soviet states.

When asked if he would meet with US President Joe Biden, Putin told a reporter that he “does not see the need for negotiations.”

Biden was asked a similar question in an exclusive interview with CNN earlier this week. The US President said he did not see “any rationale” for meeting his Russian counterpart, though he said he would perhaps make an exception to discuss the fate of imprisoned American basketball star Brittney Griner.

Russian authorities said civilian evacuations would begin Friday in the occupied southern Ukrainian region of Kherson, where the Kremlin has suffered a string of defeats at the hands of Ukrainian forces.

Further to the east, Russia’s embattled forces have managed to make some small gains in Donetsk, toward the city of Bakhmut, aided in large measure by Wagner mercenaries, or private military contractors. Moscow likely views the city a jumping-off point toward Kramatorsk and Sloviansk – the largest urban areas held by Ukraine in Donetsk, the British Defense Ministry said.

Bakhmut is currently under Ukrainian control, but it has been bombarded by Russian artillery for months. Reports from pro-Russian analysts and in Russian state media alleged that Kyiv had begun withdrawing some forces from the city, but CNN could not independently verify those claims. Ukrainian officials have not commented on them, but they have noted that Bakhmut is being fiercely contested.

Meanwhile, the outlook for Russian forces in Kherson and the northeastern region of Luhansk remain bleak. Kyiv has continued to make significant gains along the western side of the Dnipro River, a major waterway that flows across Ukraine and Eastern Europe, as they push toward the city of Kherson.

Fighting near Kherson city continued to rage on Friday. Kirill Stremousov, the deputy head of the Russian-backed administration in Kherson, said Moscow’s forces were “courageously and professionally holding back the daily attempts of the militants of the Kyiv regime to break through the defenses.”

Though Stremousov said civilians should be at a “safe distance from the hostilities” and that Kherson residents appeared to have begun evacuating. The governor of the eastern Russian region of Rostov, Vasily Golubev, said Thursday that local authorities were preparing to receive residents of Kherson fleeing the front lines, Russian state news agency TASS reported. Golubev said the first group of evacuees would arrive on Friday.

Golubev’s comments came after Russia’s deputy prime minister confirmed Moscow would assist with evacuation efforts, heeding calls from the head of the Kremlin-backed administration in Kherson who had pleaded for help.

There is now concern that Ukrainian citizens in occupied territory may be forced to go to Russian territory against their will. Reports emerged early in the war of tens of thousands of Ukrainian civilians being forcibly sent to so-called “filtration centers” before being moved to Russia. Moscow denounced the claims as lies, alleging that Ukraine has hindered its efforts to “evacuate” people to Russia. But allegations of these centers stirred painful memories of Soviet leader Joseph Stalin’s forced deportation of millions from their homelands.

Over the summer, Ukrainian officials in the contested region of Zaporizhzhia appealed to citizens who were in Russian-occupied territory to move away from front lines and into other Ukrainian-controlled territory. If that option was not possible, they advised Ukrainians to use Crimea or Russian territory as a transit route toward Ukraine or a friendly country.

Those on the frontlines in Kherson are now being advised by Ukrainian officials to avoid traveling to Russia altogether.

“Under no circumstances should you go to the Russian Federation,” warned Oleksandr Samoylenko, a top Ukrainian official in the Kherson region, on Friday. Samoylenko said that Ukrainian forces were only targeting Russian positions and equipment using high-precision weapons.

Samoylenko’s and his deputy, Yurii Sobolevskyi, both accused Russia of trying to Ukrainian citizens out of the region so they could repopulate it with “zombies who are 100% loyal to Moscow.” Sobolevskyi alleged that a similar scheme was carried out in Crimea after Russia annexed the peninsula from Ukraine in 2014.

Kherson is one of four regions Russia is now attempting to annex from Ukraine. The others are Zaporizhzhia in southern Ukraine and Donetsk and Luhansk, two eastern Ukrainian regions where fighting against Russian-backed breakaway republics has raged since 2014.