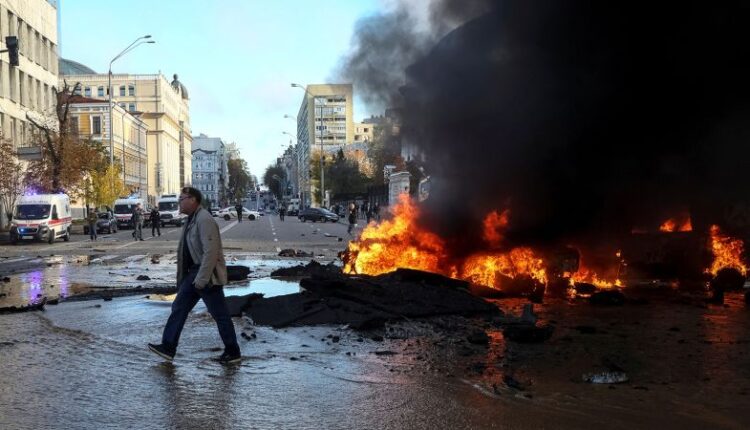 The barrage of Russian strikes that rained down across Ukraine on Monday made the country’s cities all feel so much closer to the war than they had for months.

At least 19 people died and dozens were injured in the missile strikes, which were backed up by Iranian-made attack drones. Infrastructure was damaged, and homes ahead of winter plunged into blackout. Yet Ukrainian officials said about half the 84 missiles had been intercepted. Russian commentators even suggested 150 had been launched, indicating that the damage could have been worse.

It was a different level of force from Moscow, but perhaps not a sea change in their strategy, for two reasons.

Firstly, it is unlikely they can sustain this sort of barrage over time. They have been firing missiles intermittently at targets week after week across Ukraine, which will have had an impact on stocks. It is unclear how many drones they have received from Iran, but that too is limited and a reflection of depleted stocks, not an excess. Monday may have been more an expression of military might than a change of tactics in the long-term.

It is important to remember that Moscow has had absolutely no reservations about hitting civilian targets or infrastructure since the start of the war. In the week before Monday’s attacks, the city of Zaporizhzhia was hit repeatedly by missiles, that slammed into apartment blocks, killing and injuring dozens. Earlier in the war, a maternity hospital and theater-turned-shelter marked with the words “CHILDREN” in Mariupol were hit. Monday was not a sudden change in Russia’s moral compass. They just did the same thing they’ve been doing throughout the war on a larger, wider scale.

Secondly, it didn’t really work. For the volume of cruise missiles expended, the damage to Ukraine’s infrastructure was far from catastrophic. Kyiv endured appalling scenes of crowded rush hour streets being hit – along with playgrounds and parks – and a terror it had not seen for months. The net effect of the day of Ukrainians hiding in bomb shelters was some damage to energy infrastructure and a loss of civilian life, but also a promise from the White House to supply the advanced air defenses Kyiv has been begging for over months.

At one site we visited in Dnipro, where two costly cruise missiles hit an abandoned telecoms building and a civilian bus, causing a huge crater, the road had has already been paved over as of Tuesday morning, according to images posted by locals. Even the damage was not permanent.

So what was the point? The message Moscow sent to Ukraine was not a vast change over the past seven months of carnage. It spread the war back to Ukrainian cities that had felt safer. But it again united Ukraine’s allies, and expedited air defenses Kyiv needs.

The message it did send was likely successful only in one direction: domestically. Putin has been under intense pressure, suffering from rare open dissent and criticism of the war’s conduct during the weeks since the disastrous execution of a partial mobilization suddenly dragged tens of thousands of additional Russian families into the war. His troops are retreating on three separate fronts, failing to resupply themselves, and at greater risk now the Kerch Bridge from the mainland to Crimea has been proven highly vulnerable. The calls to “do something” had grown deafening.

And after three hours of sheer terror across Ukraine, “something” has been done. Critics who had shocked by speaking out about the war – like the Chechen leader Ramzan Kadyrov – were suddenly content with the war’s progress. Kremlin mouthpieces celebrated the strikes on social media. It was ugly, but they felt they had finally inspired a fear that Moscow had been unable to conjure for weeks. Fear is an essential part of Russia’s military strategy, which has made their lower-cost and cumbersome military seem almost omnipotent for the past decade. Without it, they are stuck dealing with poor fuel supplies, terrified conscripts on the frontline, and a lack of potent strategy.

But will it even work again, or become part of their regular tactics? Probably not. Ukraine’s air defenses appeared to do a reasonable job on Tuesday intercepting further Russian missiles. Western help will likely improve that effectiveness in the weeks ahead. Russia showed itself unable to hit targets with great precision, sometimes missing or not really knowing what they were hitting, as we have seen before.

The effect of the strikes on Moscow’s domestic audience will likely also be short-lived. They are still losing territory and troops on the frontlines. They still cannot properly equip those they have forced to fight. These are problems that will be felt in more and more Russian homes, soon after the passing of the brief moment of brutal potency these strikes has afforded.

The barrage marks a loud and savage shift in tone from Russia’s new commander – Sergei Surovikin – a man whose career has been marked by the indiscriminate bombing of Syrian civilians and Russia’s brutal second Chechen war. Perhaps it will be a moment of punctuation in a long chapter of failure, or simply be used to announce his arrival.

Yet the horror of Monday is unlikely something Russia has the inventory to repeat, or the intelligence to make as effective as it is costly. It provides a gruesome yet desperately needed moment of respite for a Kremlin for whom the war narrative has been dictated by Ukraine for weeks. It is all the same a sign of desperation.

And even in its announcement, Putin’s threats were less shrill: he said future attacks would be met with a response that corresponded to the threat Russia faced. There was less nuclear bombast, and no pledge to continue the onslaught regardless. Even in his brief moment of imposing terror across Ukraine, Putin spoke from a position of growing weakness, this time with dozens of less cruise missiles in his stockpile.