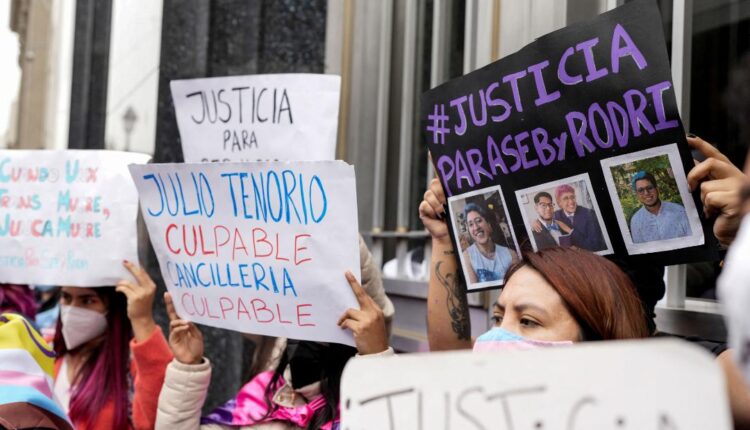 Rodrigo Ventosilla, 32, was detained by customs police shortly after arriving in the popular Indonesian tourist destination with his new husband Sebastian Marallano on a planned honeymoon on August 6 and was later accused of cannabis possession.

He died five days later in hospital in circumstances that remain unclear. A Bali police spokesman said Ventosilla fell ill after ingesting medication that was not part of the items confiscated by police and died of “failure of bodily functions.”

His family allege that both Ventosilla and Marallano were subjected to “racial discrimination and transphobia” during their time in police detention — claims that have angered the Peruvian LGBTQ community and prompted protests in the capital of Lima on Friday.

The police spokesperson denied any threats of violence towards Ventosilla.

The Peruvian Foreign Ministry reiterated Indonesia’s tough stance towards drugs and appeared to dismiss the family’s allegations of “racial discrimination and transphobia” on the part of local police towards the couple. “It is widely known that Indonesia has a zero tolerance policy when it comes to possession of drugs and their derivatives,” the ministry said in a statement.

Follow-up calls and emails from CNN to the Peruvian consulate in the Indonesian capital Jakarta also went unanswered.

However, the ministry’s stance has fueled the anger and the Lima-based group Diversidades Trans Masculinas, a network of activists founded by Ventosilla, has called for further protests.

“Following Rodrigo’s death in Bali, we call on supporters to join us in a sit-in outside Peruvian embassies and consulates from around the world to demand justice,” the group said on Facebook.

It accused the Peruvian consulate of failing to act on the case and ignoring the pleas of both Ventosilla’s family and the “international (trans) community.”

Luz Manriquez, an LGBTQ activist who was at the protest on Friday, criticized the Peruvian government for not demanding an independent investigation.

“It lacks empathy because it does not recognize that a Peruvian has died in the hands of police from another country,” Manriquez said.

Luzmo Henriquez, a lawyer for the family, told CNN they would be filing a complaint against the Indonesian police and drug-enforcement agencies alleging torture and would also seek redress from the Peruvian consulate in Indonesia, which he accused of failing to discharge its duties to the two men.

Ventosilla had been pursuing a master’s degree in Public Administration in International Development at the Harvard Kennedy School. Dean Douglas Elmendorf said in a statement that it was “a very painful time for many at the Kennedy School” and supported the family’s call for an immediate and thorough investigation into Ventosilla’s death. “The statement from Rodrigo’s family raises very serious questions that deserve clear and accurate answers,” Elmendorf said.

“The School stands with all of Rodrigo’s friends and colleagues and with the LGBTQ community.”

The Bali police spokesperson told CNN that arrangements were being made for Ventosilla’s body to be flown back to Lima.

Unlike some of the more conservative areas of largely Muslim Indonesia — such as the province of Aceh, where gay sex is punishable by flogging in public — Bali, which is majority Hindu, is usually seen as tolerant of LGBTQ tourists.

Andreas Harsono, Indonesia researcher at Human Rights Watch, said it was important for Bali to investigate the death.

“Police should conduct an independent and impartial investigation into Rodrigo Ventosilla’s death,” Harsono said. “His family and friends deserve to know why and how he had died.”