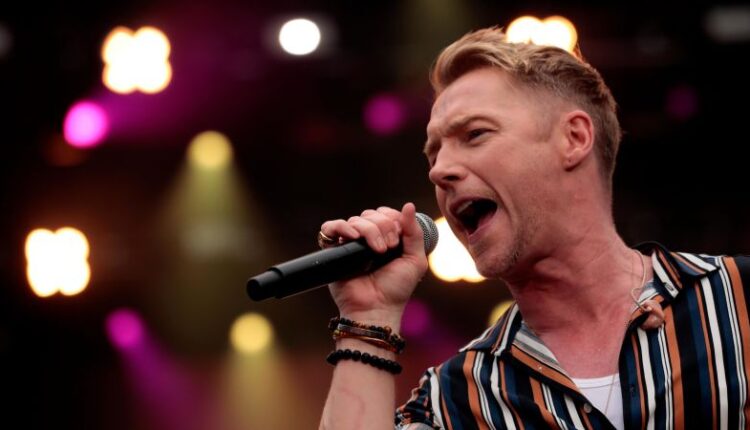 Give Ronan Keating a microphone and send him out on stage to woo a sold-out stadium crowd, and the Irishman is relaxation personified.

But hand him a driver and plant him on the first tee in front of a smattering of golf fans at St. Andrews, and the former Boyzone star becomes a ball of anxiety.

He’s sold millions of records, performed in front of the Pope and British royalty, but for Keating, playing the annual Alfred Dunhill Links Pro-Am tournament at the legendary Scottish venue is an entirely different beast.

“Chalk and cheese, two different worlds. Even on the practice round, I was rattling off the first [tee],” he told CNN’s The Jazzy Golfer, at the tournament in October.

“When you’ve got a crowd of people following the pro that you’re playing with, it is the most nerve-wracking experience. There’s nothing that comes close.”

However, don’t mistake nerves for a lack of ability.

An avid golfer of over 30 years, Keating plays off a handicap of 11 – the same number of appearances he has made at the renowned Pro-Am.

Born and raised in Dublin, the young singer’s sporting exploits initially revolved around the native sports of Gaelic football and hurling.

Keating had never given golf much thought until his brothers returned from college in the US.

Studying in upstate New York, his siblings had worked part-time as caddies on some of the region’s most prestigious courses, including six-time US Open venue Winged Foot Golf Club.

And after being handed clubs by his brothers, Keating has rarely been seen without a set since.

Even as Boyzone surged to global popularity through the mid 1990s, followed by a similarly successful solo career at the turn of the century, the fairways remained a constant sanctuary for Keating amid the demands of life as a pop star.

“If I could do anything else in my life as a job, it would be to be a professional golfer,” Keating said.

“For your mental health, something like golf is a wonderful thing … it’s incredible to be able to clear your head like that.

“Go out and hit a ball, forget about all your troubles, anything that’s going on, work, stress. It gives me peace of mind.”

Keating has only ever had one golfing idol: Gary Player.

It’s said you should never meet your heroes, but for Keating, encounters with the nine-time major winner have only enhanced the golfer’s legendary status.

Since 2018, the pair have staged an annual fundraising event in Player’s native South Africa, with this year’s effort in March raising money for sick and marginalized children in the country.

Part of the event saw Keating and Player play the same hole 18 times, once with each four-ball group that came through, but the experience was anything but monotonous.

“I just stood there for five hours with one of the greatest golfers of all-time,” Keating said.

“We laughed and we told stories, it was just unbelievable – one of my favorite moments in this game.

Though a three-time Open champion, Player never lifted the claret jug at St. Andrews, and Keating is still chasing his own personal triumph at the Old Course.

Ahead of this year’s tee-off, Keating was determined to play without expectation for the first time in 11 outings at the event.

“I put so much pressure on myself to play well and it’s ridiculous. Why would I do that? I don’t do this for a living,” he said.

“I’m here as a guest and I’m supposed to enjoy myself, so I’m going try and do that this year.”

Trailing winners Callum Shinkwin and American art dealer Alex Acquavella by six shots, the duo led the majority of a star-studded field, and pipped the father-son McIlroy pairing of Rory and Gerry by a shot.

But for Keating, the real winner was St. Andrews itself.

While the Pro-Am rotates around two other iconic Scottish links courses during the week, in Carnoustie and Kingsbarns respectively, Keating has a soft spot for the proclaimed “home of golf.”

“Kingsbarns is the most beautiful and picturesque, but St. Andrews is so special,” he said.

“It’s just a remarkable place – the scenery, the golf course, the history. To get the chance to play it is a real privilege.”