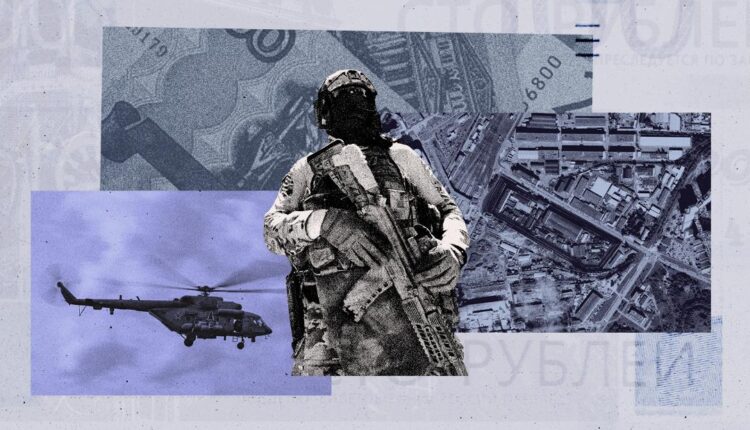 Over a month-long investigation, CNN has spoken to inmates caught up in Russia’s newest recruitment scheme, along with their relatives and friends. Activists believe hundreds have been approached in dozens of prisons across Russia — from murderers to drug offenders. Some have even been taken from the prison where one high-profile American jailed in Russia, Paul Whelan, is held. His brother David said in a statement in July he had heard ten volunteers had left IK17 in Mordovia for the frontlines in Ukraine

Dozens of chat messages between relatives, reviewed by CNN, detail the tempting rewards offered to fight in Ukraine, where the risk of death is high. The latest Western assessments suggest up to 75,000 Russian troops have been killed or injured since the invasion began (a claim the Kremlin has denied).

One prisoner spoke to CNN from his cramped jail cell, a cat crawling across bunk beds, and a fan clamped on top of an ageing television tried to cool the air between heavily barred windows. Imprisoned for multiple years for drugs offenses, he spoke on condition of anonymity using a contraband smartphone — quite common in Russia’s prison system — to outline the conditions on offer.

“They will accept murderers, but not rapists, pedophiles, extremists, or terrorists”, he said. “Amnesty or a pardon in six months is on offer. Somebody talks about 100,000 rubles a month, another 200,000. Everything is different.” He said the offer was made when unidentified men, believed to be part of a private military contractor’s firm, came to the prison in the first half of July, and that acceptance into the program would lead to two weeks of training in the Rostov region in southern Russia. While he had two years’ service in the military, he said the recruiters did not seem to insist on military experience.

“In my case, if it’s real, then I’m all for it,” the prisoner said. “It can make a real difference for me: be imprisoned for nearly a decade, or get out in six months if you’re lucky. But that’s if you’re lucky. I just want to go home to the children as soon as possible. If this option is possible, then why not?”

The prisoner said 50 inmates had already been selected for recruitment and placed into quarantine in the prison, but he had heard that 400 applied. Rights activists working in the Russian prison system said since the start of July they had been flooded with reports from across Russia from anxious relatives, concerned of the fate of their inmates.

“In the last three weeks [in July], there is a very big wave of this project to recruit thousands of Russian prisoners and send them to the war,” said Vladimir Osechkin, head of Gulagu.net, a prisoner advocacy group.

Osechkin said some were promised a pay-out to their families of five million rubles ($82,000) if they died, but all the financial rewards might never be honored. “There is no guarantee, there’s no real contract. It is illegal”, he said.

A prisoner who spoke to CNN on condition of anonymity

Some of the prisoners and their family members appeared keen for the recruitment to go ahead, Osechkin said, echoing the responses of some inmate families seen by CNN.

Osechkin speculated the prisoners were used effectively as bait, to attract the fire of Ukrainian positions and enable the regular Russian military to strike accurately back. “They go first, and when the Ukrainian army sees them, and they strike. Then Russian soldiers see where the Ukrainians are, and bomb the place”.

CNN reached out to the Russian Defense Ministry and penitentiary service (FSIN) for comment on allegations that prisoners are being recruited to fight in Ukraine. Neither responded.

While recruitment is in its early days, the first reports have emerged among family members of injured prisoners being hospitalized in the Russian-backed separatist area of Luhansk.

CNN has viewed chat messages exchanged between relatives of inmates already apparently sent to the frontline. One wife details how she contacted her husband, who lay injured in one Luhansk hospital. The wife said only three prisoners from her husband’s unit of ten were still alive. CNN is aware of the identity of the injured prisoner, but has been unable to confirm his hospitalisation, as separatist medical facilities are veiled in secrecy.

Other messages between relatives also detailed the quiet desperation of prisoners, caught up in a Russian justice system where 99% of cases brought to trial result in conviction, and corruption weighs heavy on an over-burdened penal system. This month, one prisoner messaged his brother on WhatsApp about his decision to go.

I am going. But don’t tell mother either way. It’s better that way. Or else she’ll worry a lot and react to every piece of news.

That’s it, we will react to every news. If you tell us where you are, what you’re doing, we will be calmer as at least we will know where to look.

I don’t even know. Everything will be decided by the facts.

I do know we are going to the 12th prison and once gathered there to Rostov for 2 weeks, where there is a center, and then to the territory.

I am willing to go. Lots of options [in life], but now there is only one. That’s why I agreed.

You could work at the prison, read books, get qualifications in IT or languages.

I am already too old for that sh*t.

Moscow’s manpower options have ebbed over five-plus months of clumsy and gruelling invasion. Russian President Vladimir Putin initially stated no conscripts had been deployed in the war, before his ministry of defense admitted they had withdrawn some from the frontlines after their deployment in apparent error. The Kremlin has said there will be no general mobilization in Russia, perhaps fearing the policy would prove unpopular, especially if losses spread across the population did not significantly alter the battlefield dynamic.

Prison recruitment is, activists and prisoners said, under the auspices of the Wagner private military contractor, which is not subject to the Russian military’s ban on employing convicts. The prisoners have not shared any copies of their contracts with their relatives or activists, so the precise terms or employer remain unclear. Wagner — which works globally and is run by Yevgeny Prigozhin, a man known as Putin’s chef — is Russia’s most ubiquitous military contractor. Prigozhin denies ties to Wagner.

The lack of clarity, coupled with the silence of their loved ones, only adds to relative’s anxieties. Oksana, the half-sister of a Russian prisoner who had been offered deployment, said his mother had initially been keen to receive the salary from her son’s service, but, since he vanished from their messaging apps, was beside herself with worry.

“These are the least protected part of the population. Putin said no conscripts would be sent, but they were. With convicts, it will be very hard to reveal they have been sent.”

Oksana, the half-sister of a prisoner who had been offered deployment

“We know he was in Rostov Oblast,” Oksana said, adding he had claimed he was in another prison’s factory. “He rang her on a new WhatsApp number on 10th July and asked her to send a copy of her passport so she would get his wages,” she said. This meant it was less likely he was in prison, she said, as an inmate’s wages from prison labor are usually paid into their own account.

“I am in contact with many relatives and they all have the same scenario: Send passport details. No contact,” she said. “These are the least protected part of the population. Putin said no conscripts would be sent, but they were. With convicts, it will be very hard to reveal they have been sent.” Oksana’s name has been changed due to security concerns.

In late July, the mother received a message from another new number, familiarly written in her son’s broken Russian. It insisted he was healthy, and OK, but gave no details as to his whereabouts. “There is some time left but it is going quickly”, he wrote. “When I can I will call you.”

The mother was later rang by a person introducing themselves as an “accountant,” who pledged to bring her son’s salary in cash to her a week later.