Russia is bruised as winter approaches. Can Ukraine land another blow? 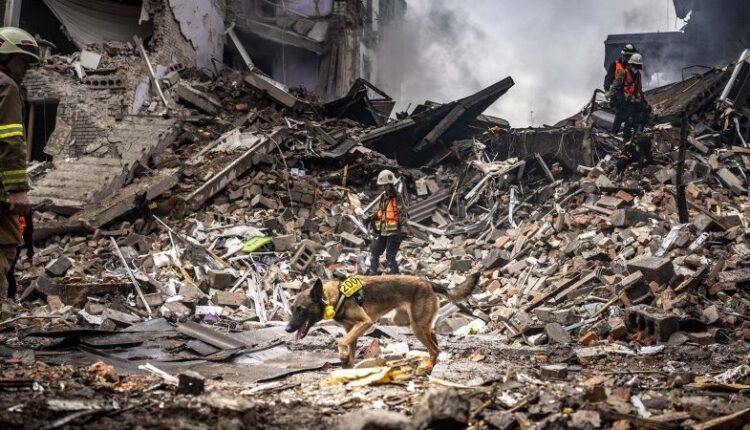 The relative calm in Ukrainian cities far from the country’s battlefields was shattered by two painfully familiar sounds this week: the ominous ring of the air raid sirens, and the eruptions of Russian attacks.

A wave of missiles, rockets and drones has struck dozens of locations across Ukraine since Monday, according to officials, targeting civilian infrastructure in several major cities, including Kyiv, located hundreds of miles from the front lines in the east and south.

The wide bombardment echoed the early days of Russia’s scattershot initial invasion in February, but also underlined that the conflict in Ukraine, which for months appeared to be descending into a slow and painful grind in the Donbas, has erupted once again as winter nears.

Not for the first time, the war is teetering towards an unpredictable new phase. “This is now the third, fourth, possibly fifth different war that we’ve been observing,” said Keir Giles, a senior consulting fellow at Chatham House’s Russia and Eurasia Programme.

The strikes followed weeks of Ukrainian ground gains and began two days after a huge explosion damaged the Kerch bridge, the only crossing between the annexed Crimean peninsula and Russia. That blast, which was used by the Kremlin as a justification for Monday’s onslaught, bruised the Russian psyche and handed Ukraine a significant strategic boost.

With the cold months nearing and likely bringing a slowdown in ground combat, experts say the next weeks of the war are now expected to be vital, and another potential spike in intensity looms over Ukraine as each side seeks to strike another blow.

“What seemed a distant prospect for anything that could be convincingly described as a Ukraine victory is now very much more plausible,” Giles said. “The response from Russia is likely to escalate further.”

Monday’s attacks, and further strikes throughout the week, were evidence of Russian President Vladimir Putin lashing out after a series of setbacks in the war that have put him under pressure domestically.

And the airborne strikes distract from what has been a dismal stretch for Russia in the ground war.

Oleksii Hromov, a senior Ukrainian military official, said last week that Kyiv’s forces have recaptured some 120 settlements since late September as they advance in the Kharkiv, Donetsk and Kherson regions. On Wednesday, Ukraine said it had liberated more five settlements in its slow but steady push in Kherson.

These counter-offensives have shifted the momentum of the war and disproved a suggestion, built up in the West and in Russia during the summer, that while Ukraine could stoutly defend territory, it lacked the ability to seize ground.

“The Russians are playing for the whistle – (hoping to) avoid a collapse in their frontline before the winter sets in,” Samir Puri, senior fellow at the International Institute for Strategic Studies and the author of “Russia’s Road to War with Ukraine,” told CNN.

“If they can get to Christmas with the frontline looking roughly as it is, that’s a huge success for the Russians given how botched this has been since February.”

Faced with growing setbacks, the Kremlin appointed a new overall commander of Russia’s invasion. But there is little sign that Gen. Sergey Surovikin can lead his forces back onto the front foot before the end of the year, given the pace and cost of the Ukrainian counter-offensives.

Ukrainian troops are focused primarily on pushing Russian forces eastwards, having crossed the Oskil River in late September, with Moscow likely preparing to defend the cities of Starobilsk and Svatove in the Luhansk region, according to the Institute for the Study of War (ISW).

Landing a major blow in Donbas would send another powerful signal, and Ukraine will be eager to improve on its gains before temperatures plummet on the battlefield, and the full impact of rising energy prices is felt around Europe.

“There are so many reasons why there is an incentive for Ukraine to get things done quickly,” Giles said. “The winter energy crisis in Europe, and energy infrastructure and power being destroyed in Ukraine itself, is always going to be a test of resilience for Ukraine and its Western backers.”

NATO leaders have vowed to stand behind Ukraine regardless of how long the war takes, but several European countries – particularly those that relied heavily on Russian energy – are staring down a crippling cost-of-living crisis which, without signs of Ukrainian progress on the battlefield, could endanger public support.

Recent days have meanwhile shown that sites beyond the current theater of ground fighting are far from immune to attacks. It remains unclear exactly how the Kerch bridge bombing was carried out – and Kyiv has not claimed responsibility – but the fact that a target so deep in Russian-held territory could be successfully hit hinted at a serious Ukrainian threat towards key Russian assets.

Russia is struggling on the ground and has failed to achieve supremacy in the air, but Monday’s attacks may have achieved one goal – sending a signal of strength towards the growing list of Putin’s internal critics.

The assault damaged civilian infrastructure in cities all across Ukraine, killing multiple people and knocking out power in pockets of the country. They were “an indication of the nature of the threat from Russia,” Giles said. “For many months now, the Russian objective has been to destroy Ukraine rather than possess it.”

Ukraine’s national electricity company, Ukrenergo, says it has stabilized the power supply to Kyiv and central regions of Ukraine after much of the country’s electricity supply was disrupted by Russian missile attacks on Monday and Tuesday. But Ukrainian Prime Minister has warned that “there is a lot of work to do” to fix damaged equipment, and asked Ukrainians to reduce their energy usage during peak hours.

Experts believe it remains unlikely that Russia’s aerial bombardment will form a recurrent pattern; while estimating the military reserves of either army is a murky endeavor, Western assessments suggest Moscow may not have the capacity to keep it up.

“We know – and Russian commanders on the ground know – that their supplies and munitions are running out,” Jeremy Fleming, a UK’s spy chief, said in a rare speech on Tuesday.

That conclusion was also reached by the ISW, which said in its daily update on the conflict Monday that the strikes “wasted some of Russia’s dwindling precision weapons against civilian targets, as opposed to militarily significant targets.”

“Russia’s use of its limited supply of precision weapons in this role may deprive Putin of options to disrupt ongoing Ukrainian counter-offensives,” the ISW assessed.

Exactly how much weaponry and manpower each side has left in reserve will be crucial to determining how the momentum will shift in the coming weeks. Ukraine said it intercepted 18 cruise missiles on Tuesday and dozens more on Monday, but it is urging its Western allies for more equipment to repel any future attacks.

“The barrage of missile strikes is going to be an occasional feature reserved for shows of extreme outrage, because the Russians don’t have the stocks of precision munitions to maintain that kind of high-tempo missile assault into the future,” Puri said.

Some help for Putin may be on the way, however. An announcement by Belarusian President Alexander Lukashenko that Belarus and Russia will “deploy a joint regional group of troops” raised fears of deepened military cooperation between the close allies and that Belarusian troops could formally join Russia in its invasion. Belarus has been complaining of alleged Ukrainian threats to its security in recent days, which observers say could be a prelude to some level of involvement.

The impact of such an intervention in terms of pure manpower would be limited; Belarus has around 45,000 active duty troops, which would not significantly bolster Russia’s reserves. But it would threaten another assault on Ukraine’s northern flank below the Belarusian border.

“The reopening of a northern front would be another new challenge for Ukraine,” Giles said. It would provide Russia a new route into the Kharkiv oblast (region), which has been recaptured by Ukraine, should Putin prioritize an effort to reclaim that territory, he said.

Any further Belarusian involvement in the war could also have a psychological impact, Puri suggested. “Everyone’s mind in Ukraine and in the West has been oriented towards fighting one army,” he said. Inside Russia, Belarus joining the invasion “would play into Putin’s narrative that this war is about reuniting the lands of ancient Rus states.”

By flipping the narrative of the conflict over the past two months, Ukrainian President Volodymyr Zelensky has achieved one of his own key objectives: showing Ukraine’s Western allies that their military aid can help Kyiv win the war.

Now Zelensky will hope for more supplies in the short-term as he seeks to drive home those gains. The leader has sought to highlight Ukraine’s success in intercepting Russian missiles, saying more than half of the missiles and drones launched at Ukraine in a second wave of strikes on Tuesday were brought down.

“But of course, as long as not all of them are shot down, of course there is a need for more,” Stoltenberg added.

Justin Bronk, a military expert with the London-based Royal United Services Institute (RUSI), agreed with that assessment, telling CNN that, “Ukrainian interception success rates against Russian cruise missiles have risen significantly since the start of the invasion in February.”

Ukraine “badly needed” modern systems such as the IRIS-T that arrived this week from Germany and the NASAMS expected from the United States, Bronk said.

Beyond weapons supplies, Ukraine will be watching to ensure that Western resolve stays firm if Russia tightens energy supplies even further.

“There are many things Russia can do to make the war personal, not just for people of Ukraine but around Europe, to try to force pressure on governments to remove their support for Ukraine,” Giles said.

The coming weeks are therefore crucial both on the battlefield, as well as in Europe and around the globe, experts suggest. “As ever, where Putin goes next depends on how the rest of the world is responding,” Giles said. “Russia’s attitude is shaped by the failure of Western countries to confront and deter it.”

It means that, as winter approaches, the stakes of the war have been raised once more. “There’s no doubt Russia would like to keep it up,” Giles said. But the Ukrainian successes of recent weeks have sent a direct message to the Kremlin, too. “They are able to do things that take us by surprise, so let’s get used to it,” Giles said.

Asia is throwing open its doors for travel — except for China