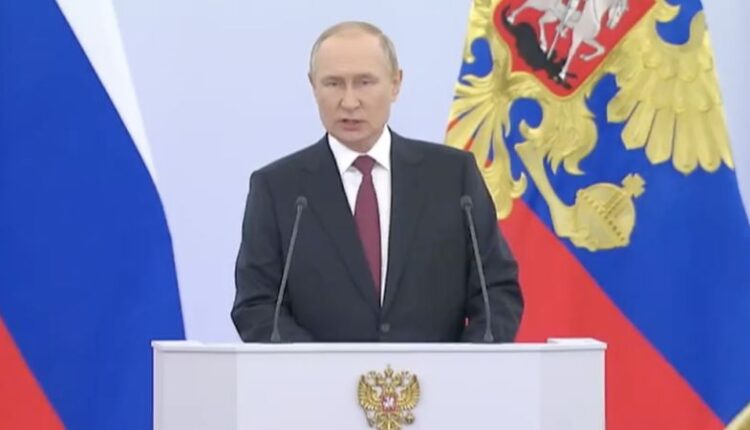 It was a moment of two completely incompatible events. One staged in Moscow, of a pen on paper, theater and imperialist expansion. The other the slow, methodical advance of Ukraine’s forces through poorly supplied and commanded Russian positions.

Friday laid bare the stark gulf between Russia’s ambitions and its reality. As Russian President Vladimir Putin hosted a remarkable, fake ceremony – in the grandeur of the Kremlin’s St. George’s Hall and with and orchestrated crowds of support at a rally outside – his forces were losing in a strategic town in the very area he claims to annex.

Thursday night’s signatures on two decrees annexing Kherson and Zaporizhzhia areas began the Potemkin farce. Part of Zaporizhzhia remains in Ukrainian hands, and slowly bits of Kherson are being prised away. Yet Moscow claimed at the moment in which the decree was posted online, these occupied areas suddenly became Russia. Indeed, Ukrainian officials say 23 civilians were killed when an apparent S300 missile strike hit a convoy of cars outside Zaporizhzhia city that were planning to drive into occupied territory to deliver aid and evacuate those allowed to leave. An act of savagery that began the area’s first day under what Russia considers its protective umbrella.

Ukraine’s advances are gathering pace. Their focus is the railway hub of Lyman, which has gained outsized importance because of Russia’s dogged defense and the strategic role it may have in their control of the entire Luhansk region. Putin signed papers Friday claiming falsely this region has now become Russia and he will do so to a backdrop of extremely bad news.

A Ukrainian soldier posted a video Friday in front of the administration building of Yampil, a tiny settlement to Lyman’s east, from which Russia has apparently retreated, suggesting that Lyman is for the most part isolated to its rear from the rest of the Russian military. Regular Russian army forces, national guard and some volunteer units are said to remain in the city in a significant number. Cut off, their decision to fight or surrender makes little difference to Ukraine’s continued advance.

The Ukrainian moves may again highlight one of the strategic flaws of Russia’s positioning – that it seems to fight hard for one location in the belief its defense will hold, and then struggle to regroup when the “impossible” happens. The Ukrainian encirclement of the supply hub of Izium was central to the recent rout of Russian forces all over Kharkiv region. The coming days will tell if the fate of Lyman is similarly key to Luhansk region.

Indeed, the central policy takeaway from Putin’s Friday rant against the West – a direct call for a ceasefire and a return to the negotiating table – reflected how the annexation ceremony was taking place against the backdrop of extremely bad news militarily. Not that the calls for talks are likely to be heeded: Ukraine and its Western allies have dismissed Russian calls for diplomacy, pointing to Moscow’s history of using the opportunity of negotiations to regroup on the battlefield.

Back on the ground, Ukraine’s methodical and deliberate progress is a cold dose of reality for a Kremlin that still seems to think it can create reality by the force of its own will. Kremlin spokesman Dmitry Peskov said Friday that the parts of Luhansk and Donetsk that Russia does not control will have to be “liberated” – a statement that totally fails to recognize that the direction of travel on the battlefield is going the other way.

So what is to be done? Moscow still seems set on the idea that “partial mobilization” will eventually improve their fortunes. Yet instead, it appears to expose again the gap between reality and fiction – between modern warfare and their belief in volume and persistence. Russia continues to attack objectives head on, with as much force as possible, and may hope tens of thousands of conscripts, poorly equipped and trained, can overwhelm positions it has so far struggled to take. But they face a modernizing Ukrainian military, with precise Western weapons and useful tactical advice, that simply out-maneuvers them. Why attack a town head on, when you can go around the back of it and cut it off?

The cracks in Putin’s Potemkin world are beginning to let the light in. His public appearance admonishing his own officials for the appalling execution of the partial mobilization is rare: This was a policy he announced, and so families whose fathers and husbands have been torn away to war will want to see things reversed swiftly, before the body bags start coming home. They are unlikely to be mollified by an acceptance from a “benevolent tsar” that things should have been handled better. Some 200,000 Russians have fled the country since the mobilization was announced, likely many more than have since been forced into army uniform.

In his Friday speech, Putin talked up the use of “all” means at his disposal to defend these newly annexed parts of Ukraine, but he did not specifically threaten to use nuclear force. He did however say the US use of such weapons against Japan created a precedent. It is a threat, but it is veiled, not direct, and each of these words and postures is carefully chosen.

With the exception of Pakistan and North Korea, most of the nuclear powers would likely be able to achieve their military goals without resorting to the Bomb. But Russia is persistently proving its actual army is not up to the tasks it has been set. And that failure likely reflects on the readiness of its nuclear forces: how can you be sure in the Kremlin that your nuclear arsenal is up to scratch if your tanks can’t get diesel 40 miles from your own border?

The days ahead will be febrile enough that this is a question nobody should seek to answer. But we are slowly seeing the gulf between what Russia wants, what it can do and what is actually happening – a gulf it normally filled with fear and threatening rhetoric – being exposed on the world stage. How Moscow reacts will decide the world we live in in the next decades.