Russian forces have staged illegal ‘referendums’ in Ukraine. What comes next? 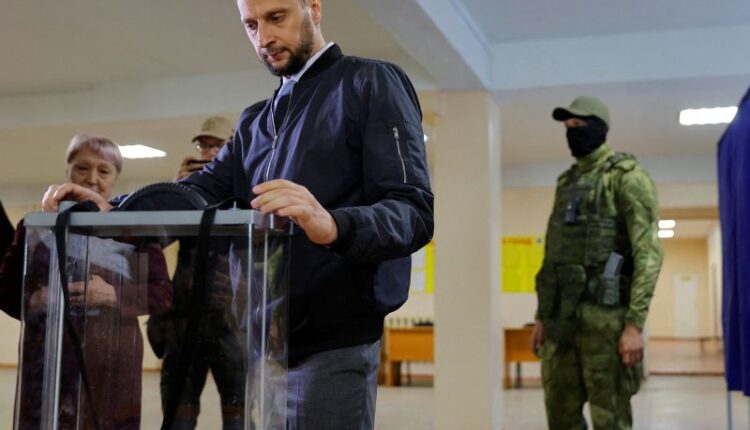 Pro-Russian authorities have held so-called referendums in four regions of Ukraine over recent days and, while the votes are illegal and have been universally dismissed as “a sham” by Ukraine and Western nations, there are fears that they could create a pretext for a new, dangerous stage in the war.

They come with the seven-month conflict at a tipping point. Rapid counterrattacks by Ukraine have dramatically swung momentum on the battlefield away from Russian leader Vladimir Putin, who is expected to escalate his country’s invasion in response.

That means the “votes” – and the bogus results that Russia and its local allies have claimed – are an important step in Russia’s faltering effort to seize control in Ukraine.

Here’s what you need to know about the referendums, and what comes next.

Four Russian-occupied areas of Ukraine staged votes on joining Russia, according to their separatist leaders from Friday to Tuesday. The polls, which are contrary to international law, could pave the way for Russian annexation of the areas.

On Wednesday, with all “votes” counted, authorities in those regions predictably claimed that residents had overwhelmingly agreed to become part of Russia.

But those numbers bear little resemblance to reality. An exclusive CNN poll of Ukrainians conducted in February, just before Russia’s invasion, found that no region of the country had more than one in five people backing Ukrainian unification with Russia.

And even in the east – the most pro-Russian area of Ukraine – less than a quarter of Ukrainians said regions that felt more Russian should be allowed to leave Ukraine and become part of Russia.

The “result” of the votes was probably decided long before any ballots were cast. “Russia’s referenda are a sham – a false pretext to try to annex parts of Ukraine by force in flagrant violation of international law, including the United Nations Charter,” US President Joe Biden said last week.

Residents of the four regions who had moved to Russia were also eligible to vote.

The moves follow a similar playbook to Russia’s takeover of Crimea in 2014. A referendum organized there, which officially saw 97% of voters back annexation, was ratified by Russian lawmakers within a week.

This time around, some regions plan to announce their results sooner than others. Voting was scheduled to end on Tuesday. Authorities in Luhansk said they would announce results the day after voting finishes, whereas in Kherson, authorities will wait for five days after polls close.

That means the claimed outcomes will have been announced by the beginning of next week. They could come sooner, however. The UK Ministry of Defense has said that “there is a realistic possibility” that Putin will use his address to Russia’s parliament on Friday to “formally announce the accession of the occupied regions of Ukraine to the Russian Federation.”

Reports from the places affected suggest that voting is being done essentially – and in some cases, literally – at gunpoint.

Serhii Hayday, the Ukrainian head of the Luhansk region military administration, said that authorities were going door to door, trailed by armed guards, to collect votes.

“If someone checked ‘against’ joining Russia, the data is recorded in some notebooks,” Hayday said on Telegram. “Rumors are being spread that people who vote against are being taken away somewhere. This is deliberately done to intimidate the local population.”

Russian-backed authorities claimed a massive turnout in the elections, reporting numbers that Kyiv and Western observers have scoffed at.

Meanwhile, for Ukrainians in occupied territories where voting took place, the means of escape are perilous. The occupied area of Kherson has been “completely closed for entry and exit” following its “vote,” the General Staff of the Armed Forces of Ukraine said Tuesday.

Travel in and out of the occupied portion of the neighboring Zaporizhzhia region is also very difficult for civilians and near-impossible for men aged 18 to 35, Ukraine’s National Resistance Center – a unit of the defense ministry – claimed.

In terms of international law, the referendums will achieve nothing because the global community is steadfastly refusing to accept them.

But back home, Putin will be able to claim that the will of occupied Ukrainians is to belong to Russia – thereby giving some false pretext to his efforts to claim that territory as Moscow’s.

British Foreign Secretary James Cleverly said in recent days that Russia has already decided in advance what will happen after these referendums are finished, stating that by “the end of the month, Russia’s intention will be to formalize the annexation of the four regions into the Russian Federation.”

That has raised concerns that Putin will seek to escalate the war once the “results” are announced. A successful counteroffensive by Ukrainian forces has pushed Russia back significantly in northeast Ukraine. Western officials have suggested that Putin will likely seek to reframe that counteroffensive and any others as an attack on Russia sovereignty.

Foreign Minister Sergey Lavrov has already nodded to that stance in recent days, saying over the weekend that Moscow reserves the right to “fully protect” areas that have formally become its territory.

When he announced a partial mobilization of Russian citizens in an address last week, Putin even raised the specter of nuclear weapons, saying he would use “all the means at our disposal” if he deemed the “territorial integrity” of Russia to be jeopardized.

But the context of the war is crucial to understanding why these hastily arranged votes are going ahead, and the threats from the Kremlin that surround them.

Ukrainian forces have completely flipped the momentum in the conflict in recent weeks, staging rapid counterattacks that have pushed Russia onto the back foot militarily. It’s an embarrassing situation for Putin to find himself in, seven months after launching an invasion that many thought would be completed within days. And it has seemingly raised concern among some of Russia’s international allies, such as China.

Meanwhile, back home, Putin’s “partial mobilization” of citizens has prompted chaos, with protests, apparent drafting mistakes and an exodus of citizens fleeing Russia.

Putin’s situation is looking increasingly desperate, as he reaches for a shift in the balance that will allow Russian forces to regain the front foot. The staging of sham referendums appears to be a key piece in his effort to force a change.

The Kremlin will likely immediately treat the territories as though they are parts of Russia now that vote tallies have been claimed. “The entire state territory of Russia that has already been or can additionally be formalized in the constitution of our country will certainly benefit from full protection,” Lavrov said at a New York press conference on Saturday. “How can it be otherwise? All the laws, doctrines, concepts, and strategies of the Russian Federation are applicable throughout its territory.”

There are concerns that Ukrainians in parts of the country controlled by Russia will be conscripted by their occupiers.

Ukrainian officials say Russia is using the votes as a pretext to draft Ukrainians into the Russian military. “The main purpose of the fake referendum is to mobilize our residents and use them as cannon fodder,” Ivan Fedorov, the Ukrainian mayor-in-exile of Russian-occupied Melitopol, said on Telegram.

Ukraine’s National Resistance Center said last week in a statement: “It is clear that after the referendum the enemy will announce mobilization on the occupied lands as well because it needs human resources.”

The Ukrainian government says the Russian occupying administrations, together with Russia’s Federal Security Service (FSB), are drawing up lists of thousands of people to be mobilized in Zaporizhzhia and Kherson.

The West and NATO immediately dismissed the votes as a stunt, and made clear there will be no change in their support for Ukraine.

“NATO’s answer is to step up support,” the alliance’s secretary general, Jens Stoltenberg, said in an interview with CNN’s Julia Chatterley on Friday. “The best way to end this war is to strengthen Ukrainians on the battlefield further, so they can at some stage sit down and reach a solution which is acceptable for Ukraine and preserves Ukraine as a sovereign independent nation in Europe.”

US officials anticipate Russia could move quickly to annex the four areas, potentially within days of voting concluding.

If and when they do, it would prompt a swift response from the United States, which has pledged not to recognize the results, one official said.

In the near term, another round of sanctions on Russia looks likely once the results of the votes are declared. National security adviser Jake Sullivan told ABC in a television interview Sunday that the G7 nations “reiterated that there would be consequences and specified that that would include additional enhanced sanctions, including sanctions on entities and companies outside of Russia that are supporting the Russian war machine or supporting these fake referenda or Russia’s efforts.

“So, you will see that in the days ahead the United States will have further announcements in coming days if Russia follows through on this,” Sullivan said.

But it is clear that the prospects of an escalation in the war have heightened concerns about what comes next – particularly with regard to nuclear weapons. “Russia understands very well what the US would do in response to the use of nuclear weapons in Ukraine because we have spelled it out for them,” Sullivan said, as officials find themselves working to reassure their populations and global allies.

While officials have not seen indications that Russia is planning to use nuclear weapons in the near term, they are more concerned about the possibility now than they were six or seven months ago, one official confirmed to CNN, though they still maintain that the likelihood of Russia doing so is low.