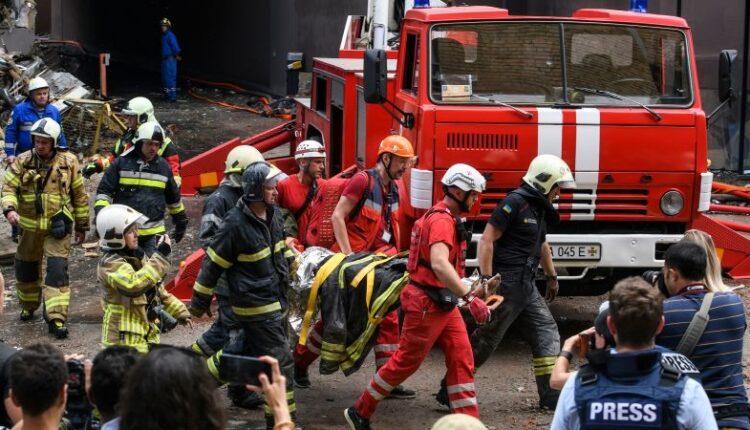 Russia targeted the Ukrainian capital of Kyiv with a series of missile attacks Sunday, as leaders of the G7 nations gather in Germany for the first day of their annual summit.

One person died and at least six were wounded in a Russian missile strike that hit a residential apartment block in Kyiv. The city’s Deputy Mayor, Volodymyr Bondarenko, said four of the injured were admitted to the hospital as search and rescue operations continue.

Bondarenko also said a kindergarten was hit in the missile strike but no one was injured, and video from Ukraine’s Ministry of Internal Affairs showed a large missile funnel in the backyard of the kindergarten.

Those injured in the residential block included a 7-year-old girl, he said. Her mother, a 35-year-old woman named Katerina, was rescued from the rubble and put into an ambulance. She is a citizen of Russia, but had lived in Kyiv for a long time.

A CNN team on the ground spoke to the injured girl’s grandmother, Natalia Nikitina, who found out about the attack online and rushed to the apartment block, where she cried as she watched teams trying to rescue her daughter-in-law.

“There is nothing worse than losing loved ones. Why do we deserve this?” she said. A huge plume of smoke continued to billow from the building two hours after the strike, while nearly every window was blown out on the top floor, and the ground was covered in debris and twisted metal.

Ukrainian air force spokesman Yurii Ihnat said “strategic bombers” were used to hit the capital, with “four to six missiles” launched. He added that on Saturday, Russia had used Tu22M3 long-range bombers from the airspace of Belarus for the first time in a Ukrainian air strike.

The mayor of Kyiv, Vitali Klitschko, said on Telegram there had been several explosions in the city’s Shevchenkivskyi district, and that search and rescue operations were launched after a fire broke out when a residential building was hit by a rocket.

“There are people are trapped under the rubble. Some residents have been evacuated, with two victims hospitalized. Rescuers are continuing their work,” he said.

Speaking to CNN onsite, Klitschko said Russia’s war on Ukraine was “senseless” and thousands of civilians had died, and added, “We have to do everything to stop this war.”

The Ukrainian State Emergency Service said the fire was caused by “enemy shelling” and was over an area of 300 square meters, in “a 9-storey residential building with partial destruction of the 7th, 9th and 9th floors.”

The same neighborhood was hit by a missile strike in early May, and was also targeted in March.

Vadym Denysenko, an adviser to the Minister of Internal Affairs, said on Ukrainian television that there are “a number of military infrastructure facilities located in the Shevchenkivskyi district of the Ukrainian capital. This is the reason why the Russians are shelling this district.”

US President Joe Biden called Sunday’s attack “more of [Russian] barbarism.” He declined to respond when asked whether the strikes were a deliberate provocation during the G7 summit.

After the key city of Severodonetsk was confirmed by Ukraine to be “completely under Russian occupation” on Saturday, the country’s eastern Luhansk region is now almost entirely under Russian control. However, Ukrainian forces continue to defend the neighboring city of Lysychansk, which is coming under growing Russian artillery and rocket attacks.

On Sunday, the head of the neighboring Donetsk region’s military administration, Pavlo Kyrylenko, said Russian forces were gathering for fresh assaults in the region, nearly half of which is under Ukrainian control.

“We are now witnessing the accumulation of manpower, heavy armored vehicles and artillery in the direction of Sloviansk,” Kyrylenko said on Ukrainian television.

“The enemy is using its well-known tactics, trying to move closer to our line of defense in order to fire artillery at the cities. Enemy artillery is already reaching certain parts of Sloviansk. This is another confirmation that people should evacuate.”

Throughout the offensive in the east, Russian forces have used intense artillery and rocket bombardment ahead of trying to take ground. They are attacking areas of Donetsk from three directions.

Kyrylenko said there had been a missile strike and rocket attacks on Kurakhove, a town on the southern front line in Donetsk that has been a target of Russian attacks for more than two months. Avdiivka had also been hit by rockets, he said.

As Russian forces step up the momentum of their offensive in eastern Ukraine, the city of Kharkiv and surrounding areas have come under increasing artillery fire again.

Russian Defense Minister Sergey Shoigu also visited Russian troops involved in what the Kremlin has called the special military operation in Ukraine, according to the Defense Ministry.

Video released by the news agency RIA Novosti shows Shoigu disembarking from a helicopter in an unknown location and meeting officers inside what appears to be a command center.

The Telegram channel of the Russian Defense Ministry said Shoigu “listened to reports from commanders on the current situation and the actions of the Russian Armed Forces in the main operational areas at command posts.”

Shoigu is also seen conferring medals on several soldiers, including “the Gold Star Medals of the Hero of the Russian Federation and the Order of Courage,” according to the Telegram post. It’s unclear exactly which locations Shoigu visited and whether they were inside Ukraine.

“In the next few months, we will transfer to Belarus the Iskander-M tactical missile systems, which, as you know, can use both ballistic and cruise missiles, both in conventional and nuclear versions,” Putin told Lukashenko, according to the Kremlin.

In a transcript of the meeting, Lukashenko expressed to Putin his “stress” and concerns and over what he alleged are flights by United States and NATO planes “training to carry nuclear warheads” close to Belarus’ border.

Lukashenko asked Putin to consider “a mirrored response” to the flights or to convert Russia’s Su-35 fighter jets, that are currently deployed to Belarus, so that “they can carry nuclear warheads.”

Putin replied that although it is possible to match the US flights, “there is no need,” and suggested that because Belarus’ military has a large number of Su-25 aircraft that can be converted to nuclear-capable instead.

The Iskander-M is a Russian built short range ballistic missile system that can carry conventional or nuclear warheads with a maximum range of up to 500 KM (310 miles),according to Janes Defense.

On Saturday, Ukraine said it had been hit by attacks launched from the Belarusian airspace for the first time.

Biden tweeted on the announcement Sunday in Germany, “The United States has imposed unprecedented costs on Putin to deny him the revenue he needs to fund his war against Ukraine. Together, the G7 will announce that we will ban the import of Russian gold, a major export that rakes in tens of billions of dollars for Russia.”

Biden also remarked on the unity of the G7 and NATO on Ukraine and the Russian invasion, telling German Chancellor Olaf Scholz that the G7 and NATO will stay together and not “splinter.”

British Prime Minister Boris Johnson said the price of allowing Russian President Vladimir Putin to “continue with his program of conquest” is far higher than the current cost.

“The price of backing down, the price of allowing Putin to succeed, to hack off huge parts of Ukraine, to continue with his program of conquest, that price will be far, far higher. Everybody here understands that,” Johnson said in an interview on the sidelines of the G7 Summit in Germany.

Designing The Creatures And Gore Of The Callisto Protocol

North Korea denounces US ‘aggression’ as it marks war anniversary