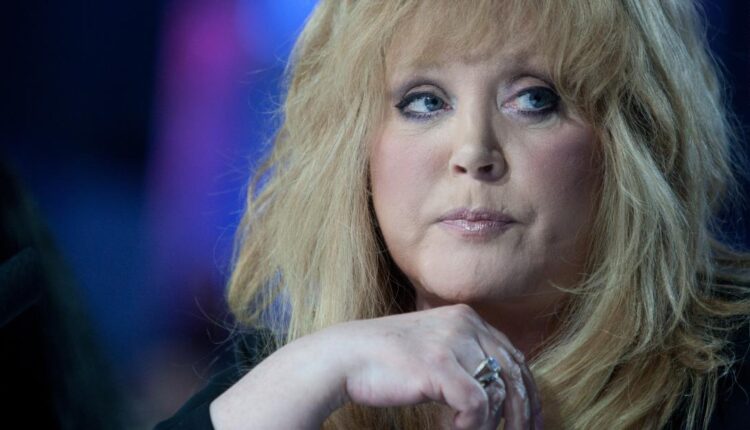 Her comments came in an Instagram post in which she expressed support for her husband, Maxim Galkin, a comedian who was designated a “foreign agent” by Russia’s Justice Ministry on Friday under a draconian law to rid the country of foreign influence and funding.

In her post, Pugacheva said her husband wished for an end to the death of Russian soldiers, who were “dying for illusory aims that make our country a pariah.”

She said Galkin was a “good real and incorruptible patriot of Russia” who wished for “prosperity” and “freedom of speech,” while she appealed to the ministry to label her a foreign agent as well.

Commenting on his designation on Saturday, Galkin said in an Instagram post: “The rationale for this decision was that I allegedly received funds from Ukraine, funds for which I carried out political activities. Well, first of all, I’m not involved in politics. From the stage at my concerts, I am engaged in a humorous genre, political satire, and I have been doing this for 28 years.”

“I do not sell my opinion and my thoughts and do not buy someone else’s,” he added. “I don’t trade conscience. As for Ukraine, once, well, 10 years ago, when I gave concerts there, I received money, but for many years I have not received a penny from Ukraine, so, of course, the reason is far-fetched and I don’t know why this is happening now.”

In March, Galkin and Pugacheva, who have two children, left Russia for Israel, according to multiple Russian and Israeli media reports. A social media post from a Russian fashion designer said Pugacheva returned to Russia in August. But It is not clear where she is now or where their family permanently resides.

Galkin has been an outspoken critic on social media of Russia war, which Kremlin officials call a “special military operation.”

In a call with reporters on Monday, Kremlin spokesman Dmitry Peskov declined to comment on Pugacheva’s post.

But in early September, Peskov said Galkin had made “very bad statements” about Russia and that he was “clearly not on the same path as us,” according to Russian state media.

At the time, Peskov said he had not heard criticism of Russia’s campaign from Pugacheva and noted that Russian President Vladimir Putin and the singer are “familiar and have met more than once.”