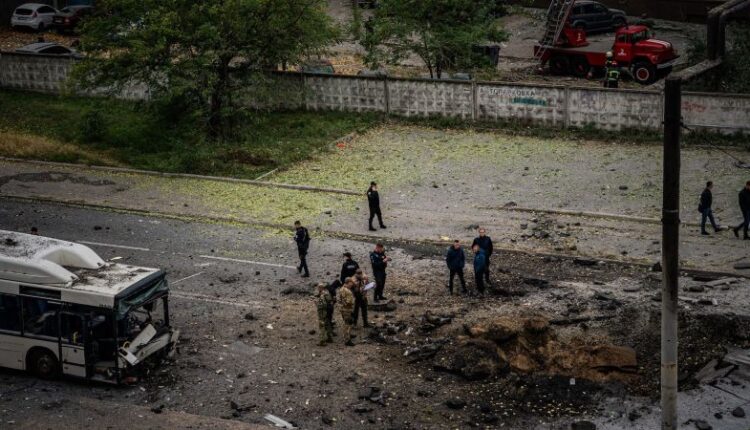 The Russian military appears to have embarked on a new tactic in its efforts to turn the tide of its faltering war: trying to overwhelm Ukraine’s largely Soviet-era air defenses with dozens of missiles and drones from multiple directions.

As Ukraine races to shore up its missile defenses in the wake of the assault, the math for Moscow is simple: A percentage of projectiles are bound to get through.

Russia’s aerial onslaught of the last few days has been largely directed at Ukraine’s energy infrastructure, using a variety of missiles and newly acquired Iranian drones. But while the damage has been substantial, Ukraine claims that it has taken out around half of the missiles fired – and it expects that success rate to improve as new air defenses arrive from Germany, the US and elsewhere.

Over the last three days, the Russians have been using a mix of their missile stocks. The majority were air-launched cruise missiles, some delivered by bombers based near the Caspian Sea. But they also deployed ship-launched Kalibrs from the Black Sea, ground-launched Iskander cruise missiles and dozens of attack drones.

The great unknown is just how far such a blitz is depleting Russian inventories – and whether increasingly they will resort to stocks of older, less accurate but equally powerful missiles.

Estimating Russian missile inventories is guesswork. In May, President Volodymr Zelensky said Russia had launched 2,154 missiles and had probably used up 60% of its precision-missile arsenal. That now looks like wishful thinking.

The Pentagon’s view at the time was that of its weapons stocks, Russia was “running the lowest on cruise missiles, particularly air-launched cruise missiles,” but that Moscow still had more than 50% of its pre-war inventory.

Some of that inventory was dispatched this week. But Russia has recently resorted to using much older and less precise KH-22 missiles (originally made as an anti-ship weapon), of which it still has large inventories, according to Western officials. Weighing 5.5 tons, they are designed to take out aircraft carriers. A KH-22 was responsible for the dozens of casualties at a shopping mall in Kremenchuk in June.

Even the more modern KH-101 missile has an accuracy of up to 50 meters, which hardly qualifies as a “precision weapon.”

The Russians have also been adapting the S-300 – normally an air defense missile – as an offensive weapon, with some effect. These have wrought devastation in Zaporizhzhia and Mykolaiv, among other places, and their speed makes them difficult to intercept. But they are hardly accurate.

There’s no doubt this week’s missile attacks, beyond causing dozens of casualties, have inflicted significant damage. Ukraine’s Energy Minister Herman Halushchenko told CNN on Tuesday that around 30% of the country’s energy infrastructure had been hit by Russian missiles since Monday.

He told CNN’s Richard Quest that this was the “first time from the beginning of the war” that Russia has “dramatically targeted” energy infrastructure.

Over the past nine months, the Ukrainians have also had plenty of practice in using their limited air defenses, mainly BUK and S-300 systems. But Yurii Ihnat, spokesman for the Air Force Command, said Tuesday said of these systems: “This equipment does not last forever, there may be losses in combat operations.”

And he noted that “the manufacturer of this [equipment] is Russia, so we will have to say goodbye to them sooner or later.”

Ukrainian air defense battalions have become innovative: One video from Monday, referenced by Zelensky, showed a soldier using a shoulder-held missile to bring down a Russian projectile, purportedly a cruise missile.

Zelensky said in a video message Tuesday that 20 of 28 missiles fired at Ukraine that morning had been shot down. Ukrainian officials have told CNN that more than half the Russian cruise missiles fired on Monday and Tuesday were brought down: 65 out of 112.

But that still means about 50 hit their targets, enough to cause massive damage.

Estimating the proportion of Iranian-made Shahed drones being eliminated is more difficult, because so many are being used. Zelensky said that “every 10 minutes I receive a message about the enemy’s use of Iranian Shaheds.” But he also said the bulk of them were being shot down.

Last month, the US deputy undersecretary of defense for policy, Sasha Baker, said the US had seen “some evidence already” that the Iranian drones “have already experienced numerous failures.”

Speaking to the G7 meeting on Tuesday, Zelensky appealed for an air shield for Ukraine.

“When Ukraine receives a sufficient number of modern and effective air defense systems, the key element of Russian terror – missile strikes – will cease to work.”

Ukraine’s allies understand this need. Ahead of a meeting in Brussels Wednesday of Ukraine’s supporters, General Mark Milley, chairman of the US Joint Chiefs of Staff, said that “after Russia attacked the Ukrainian civilian population, we will be looking for air defense options that will help the Ukrainians.”

A senior Defense Department official added that work was continuing on improving Ukrainian air defenses, including “finding Soviet-era capabilities to make sure that countries were ready (and) could donate them and help move those capabilities.”

Milley said that “what we think can be provided is an integrated air missile defense system.”

Speaking after the Ukraine Defense Contact Group meeting, he said such a system would not “control all the airspace over Ukraine, but they are designed to control priority targets that Ukraine needs to protect. What you’re looking at really is short-range low-altitude systems and then medium-range medium altitude and then long-range and high altitude systems, and it’s a mix of all of these.”

Western systems are beginning to trickle in. Ukrainian Defense Minister Oleksii Reznikov said Tuesday that a “new era of air defense has begun” with the arrival of the first IRIS-T from Germany, and two units of the US National Advanced Surface-to-Air Missile System (NASAM) expected soon.

“This is only the beginning. And we need more,” Reznikov said Wednesday before tweeting as he met with Ukraine’s donors at the Brussels meeting:” Item #1 on today’s agenda is strengthening (Ukraine’s) air defense. Feeling optimistic.”

But these are hardly off-the-shelf-items. The IRIS-T had to be manufactured for Ukraine. Western governments have limited inventories of such systems. And Ukraine is a very large country under missile attack from three directions.

It’s also uneconomical to waste advanced systems on taking out cheap drones. But there may be other answers for the hundreds of attack drones Russia is now deploying. According to Zelensky, Russia has ordered 2,400 Shahed-136 drones from Iran.

However, Ukrainian officials say that air defense forces are already taking down the “bulk” of the Shahed drones.

Ukraine’s senior military commander, General Valerii Zaluzhnyi, tweeted Tuesday his thanks to Poland as “brothers in arms” for training an air defense battalion that had destroyed nine of 11 Shaheeds.

He said Poland had given Ukraine “systems” to help destroy the drones. Last month there were reports that the Polish government had bought advanced Israeli equipment (Israel has a policy of not selling “advanced defensive technology” to Kyiv) and was then transferring it to Ukraine.

There’s now a race between the Ukrainians’ ability to acquire new air defense hardware, train on it and deploy it – and the Russians’ ability to inflict massive damage on Ukrainian infrastructure (civilian and military) with their deep stocks of missiles, not all of which are precision weapons.

NATO Secretary General Jens Stoltenberg said on Tuesday that Ukraine needed “more” systems to better halt missile attacks. “These air defense systems are making a difference because many of the incoming missiles (this week) were actually shot down by the Ukrainian air defense systems provided by NATO Allies,” he said. “But of course, as long as not all of them are shot down, of course there is a need for more.”

Until more arrive, there is the risk – all too familiar to the government and people of Ukraine – that the Russian mix of missiles will wreak much greater havoc among the civilian population, especially if the Russians persist with the tactic of using swarms of missiles, inundating air defenses.