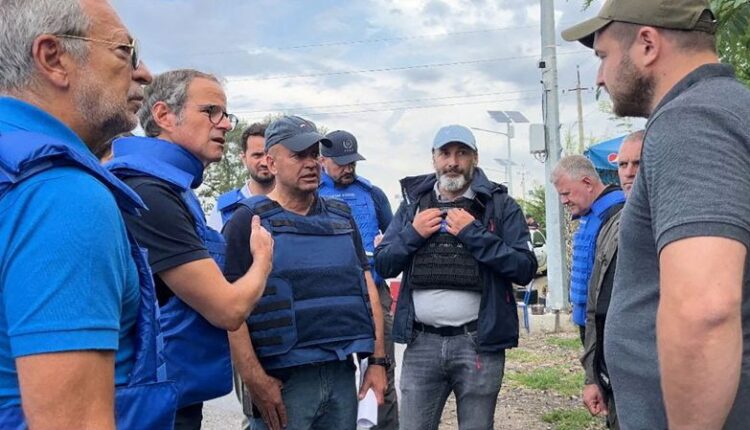 Rafael Mariano Grossi, Director General of the International Atomic Energy Agency, speaks to the press before leaving from the hotel with the delegation to inspect the Zaporizhzhia Nuclear Power Plant in Zaporizhzhia, Ukraine, on September 1.

The day after the highly publicized International Atomic Energy Agency visit to the Zaporizhzhia nuclear power plant, a team of five inspectors remains at the site.

IAEA chief Rafael Grossi said that the UN nuclear watchdog is “not going anywhere” and will have a “continued presence” at the plant.

A prolonged IAEA presence there would likely help to stave off the possibility of a dangerous nuclear accident. However, it’s not entirely clear what that continued presence might look like.

Grossi – who left the plant on Thursday – said that he would be reporting to the agency’s Board of Governors “and then we are establishing a continued presence there…so that they can continue to provide me and all of us with the impartial, neutral, technically sound assessment of whatever it may be happening there.”

Meanwhile, the Ukrainians have demanded that the IAEA press for the demilitarization of the area around the plant, which is currently held by Russian forces.

Ukrainian President Volodymyr Zelensky said in his Thursday video message that demilitarization was “the goal of Ukrainian and international efforts. And it is bad that we have not yet heard the appropriate call from the IAEA. Although we talked about it with Mr. Grossi at our meeting in Kyiv. It was the key – the key – security point of our agreements: demilitarization and full control by our nuclear workers.”

But such a move would be beyond the IAEA’s limited mandate – and the agency shows no sign of addressing it.

Instead, Grossi stressed the technical nature of the visit while in Zaporizhzhia and the examination of what he called “three or four key areas” at the plant, including emergency systems and control rooms

The so-called “seven pillars” of the agency’s framework include the physical integrity of facilities, their safety systems, secure off-site power supply, effective radiation monitoring systems and reliable communications with the regulator.

The plant and the area around it, including the adjacent city of Enerhodar, have endured persistent shelling that has raised fears of a nuclear accident through the interruption of the power supply to the facility. Each side accuses the other of acts of nuclear terrorism.

Russia has insisted the military presence at the plant is to protect it; Ukraine says that the Russians are using the territory of the plant to fire at Ukrainian-held territory on the other side of the river Dnipro.

Each side is working hard to present its version of the situation to the IAEA team.

The Ukrainian side is concerned that even at the plant, the Russians will seek to withhold the reality from the inspectors. On Thursday, Zelensky said:  “We have specific information that Russia has done a lot of cynical things in order to deceive the [IAEA] mission.” It was a theme picked up Friday by Ukraine’s state nuclear company Energoatom, who said on Telegram: “The Russian occupiers are making every effort to prevent the International Atomic Energy Agency mission from getting to know the facts on the ground at the Zaporizhzhia NPP.”

Alexander Volga, head of the Russian-backed military-civil administration of Enerhodar, said Friday that the IAEA team “was provided with relevant documents on the nuclear power plant, as well as a map of shelling by the Armed Forces of Ukraine.”

The IAEA will tread carefully, sticking to its seven pillars in pursuing a strictly technical path to ensure the plant’s systems are in working order and that it has an uninterrupted power supply.

Starbucks names Laxman Narasimhan as its next CEO