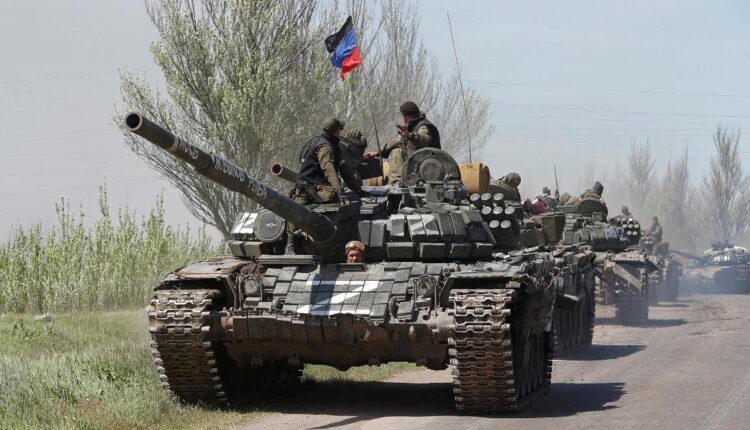 Three Russian military bloggers have suddenly launched into damning criticism of the operation, and especially the debacle of a failed crossing of the Siverskyi Donets river last week. The three bloggers combined have more than three million subscribers on Telegram.

A prominent former officer who regularly appears on state television also weighed in with a gloomy view of Russia’s military prospects in Ukraine.

Such public criticism of the military operation in Ukraine is very rare. The Kremlin insists the campaign is on schedule.

On the evening of May 12, prominent Russian military correspondent Yuri Kotenok reposted accounts and images of the failed crossing, including one from a Ukrainian source.

Kotenok, who has nearly 300,000 subscribers to his Telegram channel, reposted one account that castigated the Russian officer responsible and blamed him for crowding so many vehicles in a small area by the river.

In response to criticism from some subscribers, Kotenok retorted: “If you want fairy tales, then you have come to the wrong place. In such a case you should go to officialdom.”

He said his role was “to provide with correct assessment, to speak good of the good, and bad of the bad, but to say the TRUTH.”

Kotenok even had a dig at Russian television coverage. “If you want to sit in a warm bath and ‘fight’ softly and soothingly, then you are welcome to the television. There you will find a lot of things for the delight of your ears and eyes,” he said.

The correspondent has been on the frontlines of other conflicts and said that he carried shrapnel in his body, before concluding: “In war it happens that we suffer losses. Know this and … be silent if you have nothing to say in essence.”

Several other popular Telegram accounts in Russia picked up the theme.

In a series of posts, blogger Vladlen Tatarskiy blamed the Russian commander of the operation. “Until we find out the name of this ‘military genius’ who wasted the BTG [battalion tactical group] near the river and he publicly answers for this, there will be no reforms in the army,” he wrote.

“The offensive in the Donbas is being hampered,” he said, “not only due to the lack of effective intelligence from UAVs [drones], but also due to such generals.”

He said he’d been warning for 18 months that Russian forces lacked both strike and reconnaissance drones.

Tatarskiy told CNN that he was not criticizing the entirety of what the Kremlin calls Russia’s “special military operation” but “individual episodes,” and he still believed Russia would achieve its goals in Ukraine. “I will personally make every effort to it,” he added, speaking to CNN by text message.

Nevertheless, he also called for broad change. “All the areas need to be improved,” he said. “Each war reveals some drawbacks, shortcomings, or false experiences, experiences that need to be adjusted to the modern realities. So absolutely all spheres need reform,” said Tatarskiy.

Another Telegram blogger sharing his views goes by the name “vysokogovorit,” and has nearly 400,000 subscribers.

“Didn’t the commander of the crossing at Bilohorivka have information that in the third month of the war, it was not permissible to move in large convoys, and let alone to accumulate them in a narrow fire-swept area in front of a water barrier?” he posted.

“How much of an idiot do you have to be to not understand this? Although this may not be idiocy, but direct sabotage.”

Vysokogovorit said he’d been part of a river crossing near Izium. “So I know what I’m talking about.”

Blogger Yuriy Podolyaka, who has more than two million subscribers, echoed the criticism and later posted that the Russian Defense Ministry had conducted an analysis of the pontoon bridge disaster and that lessons were being learned. CNN cannot verify his claim.

The outbursts from such popular Telegram channels were as brief as they were unexpected. All three accounts quickly returned to familiar themes such as alleged atrocities of the Ukrainian army. But the fact that they even aired such views and have not been taken out of circulation has surprised some observers.

Doubts about the course of the Russian operation have even emerged on one of state television’s flagship shows. On Monday’s edition of Rossiya One’s 60 Minutes, retired colonel Mikhail Khodarenok warned that “the situation for us will clearly get worse.”

Khodarenok rejected the claim that the Ukrainian armed forces are in crisis and on the verge of a “moral collapse” — describing such propaganda as “informational sedatives.” “To put it mildly, this is not true,” he said.

Despite pushback from the show’s presenter, Khodarenok estimated that Ukraine could arm one million people. And with the US Lend-Lease military aid program beginning soon, he said, along with European assistance, “we really need to treat this million Ukrainian soldiers as a reality in the near future.”

Ukrainian soldiers’ morale is more important than their training, he insisted. “The desire to defend their motherland as they understand it in Ukraine very much exists,” he said.

“Ultimately victory on the battlefield depends on the high morale of troops who are spilling blood for ideas they are ready to fight for,” Khodarenok added — possibly hinting at continuing reports of low morale in some Russian units in Ukraine.

Khodarenok also took a critical view of Russia’s broader situation. “We are in total geopolitical isolation, the whole world is against us but we don’t want to admit it,” he said. “As far as China and India are concerned, their support for us isn’t so unconditional.”

Another critical voice is a former commander in the separatist Donetsk People’s Republic (DPR) militia, Igor Strelkov — who was the DPR’s self-proclaimed minister of defense when the Malaysian airliner MH17 was allegedly shot down by men under his command in 2014.
Still influential in the DPR, Strelkov wrote Monday that “the widely advertised late-April and early-May operation to defeat the Donetsk group of the enemy has FAILED.”

In a long screed, Strelkov said that “only tactical successes have been reached. Not a single large locality has been liberated…It’s clear now that by early summer Donbas will not be fully liberated.”

Strelkov, whose Telegram channel has nearly 400,000 followers, said that the Russian high command was too obvious in its approach and lacked any element of tactical surprise.

Besides “individual examples of ‘outstanding lunacy'” — such as the attempt to cross the river, Strelkov said that “the losses incurred in daily offensive battles (that do not end with the enemy’s defeat) cannot be quickly compensated by trained replacements.”

“No one knows where [Ukraine] will strike and when our troops will finally run out of steam (although this can also be predicted which I’m not going to do),” he added pessimistically.

These rare voices of criticism in Russia and the DPR almost certainly do not portend any change of strategy on the part of the Kremlin, but their airing as Ukraine presses a counteroffensive in the northeast is in stark contrast to the monopoly of the state over media coverage of the invasion.

Will Hezbollah’s election setback change anything in Lebanon?