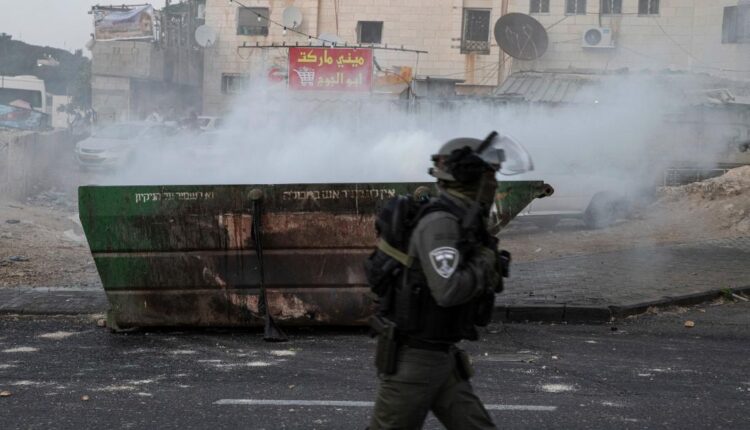 The incident followed the controversial flag march through the Old City in Jerusalem on Sunday.

“Last night, during a riot in the Sheikh Jarrah neighborhood in East Jerusalem that involved throwing stones, two suspects who were at the scene attacked with severe violence, which allegedly included beatings with a stick, punches and pepper spray, a journalist who was present and covered the events” and “allegedly stole the mobile device in his possession,” the statement said.

“As a result of the assault, the journalist was injured and in need of medical treatment,” the statement added.

“We view violence of any kind with severity and in particular against journalists who perform their duties. We will continue to act resolutely against violence and bullying, until the perpetrators are involved in these acts,” Israeli Police said in the statement.

The journalist who was assaulted, Iyad Harab, works with Israeli news channel Kann News. CNN’s team on the ground saw Harab laying on the street moments after he was attacked, screaming about the pain in his eyes.

Harab later said in a video statement shared to Twitter that he was sprayed with “pepper spray or tear gas” by “young Jews.” A Knesset member, Ahmad Tibi, shared Harab’s video statement about the incident.

“I came here after I finished with events at Damascus Gate, after the march passed through…There were clashes here, and I came to film the young Jews. After they saw that I was filming, they came and told me ‘don’t film.’ Then they attacked me. Someone came and sprayed me with pepper spray or tear gas, I don’t know exactly,” Harab said.

“I fell onto the ground, I couldn’t see anything. And, after I fell, they came with sticks, they hit me in the head, the back, the leg. They knocked me down, and continued to beat me once I was on the ground. I want to emphasize that the police, I yelled and screamed, and the police were on site and didn’t do anything. They didn’t move a finger,” he added.

When asked to respond to Harab’s accusations, a spokesperson for the Israeli police said in part “Following the serious case, the police opened an investigation and as a result, they managed to arrest 2 suspects within a short time and the court granted the police request and extended their detention for several days.”

Video shot by CNN and others from the immediate aftermath show Israeli officers offering to help Harab and trying to get him water.

Sheikh Jarrah is a neighborhood in East Jerusalem not far from the Old City that is often a flashpoint for clashes between Israelis and Palestinians.

During Sunday’s flag march through the Old City, CNN’s team witnessed several violent encounters where Israeli nationalists attacked Palestinians and journalists — including CNN staff — with pepper spray, as well as throwing sticks and bottles at reporters gathered to cover the march.

Tracing Threads: The Making Of Tunic