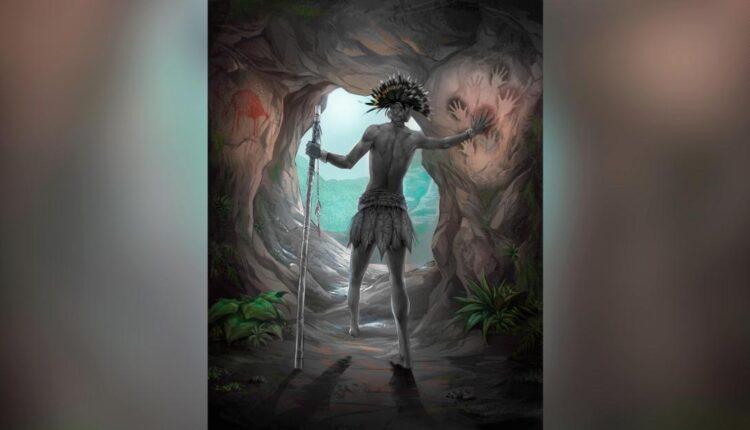 Using radiocarbon dating techniques, scientists estimate the body has lain undisturbed for 31,000 years inside the Liang Tebo cave in eastern Kalimantan province in Borneo, according to research published in the journal Nature on Wednesday.

But the most striking aspect of the discovery was that the young man or woman was missing their lower left leg, with signs it had been carefully amputated when the person was a pre-teen or early teen before their death from unknown causes between 19 and 21, researchers said.

The otherwise remarkably intact skeleton was found by in 2020 by Australian and Indonesian archaeologists, who say the amputation reveals considerable surgical skill and is the earliest example in the archeological record, shaking up our understanding of sophistication of Stone Age humans.

“It’s significant because it considerably pushes back our species’ knowledge about surgery and complex medicine,” said Maxime Aubert, a professor at Griffith University’s Centre for Social and Cultural Research in Queensland, via email.

“They had to have a profound knowledge of human anatomy, how to stop the blood flow, anaesthesia, and antisepsis. All of these only became the norm very recently,” Aubert wrote.

Experts had thought humans lacked the expertise to perform difficult procedures like amputation until the emergence of agriculture and permanent settlements transformed human society within the last 10,000 years.

Prior to this discovery, the oldest known amputee was an elderly farmer whose whose left forearm had been removed just above the elbow 7,000 years ago in what is now France, the study noted.

It was only 100 years ago that surgical amputation became a medical Western norm. Before developments like antibiotics, the study said, most people would have died at the time of amputation, either from blood loss and shock or from subsequent infection.

The individual had their lower left leg amputated as a child and survived for six to nine years after the surgery, according to the research.

There was was no trace of infection in the bones, and new bone growth had formed over the amputated area — something that takes considerable time. Plus, while the rest of the skeleton was adult sized, the amputated bones stopped growing and retained their child size.

The surgeon or surgeons who performed the operation 31,000 years ago, likely with knives and scalpels made from stone, must have had detailed knowledge of anatomy and muscular and vascular systems to expose and negotiate the veins, vessels and nerves, and to prevent fatal blood loss and infection, the study said.

After the amputation, intensive nursing and care would have been vital, and the wound would have had to have been regularly cleaned and disinfected.

To live for years with a amputated leg in mountainous terrain, the individual would have needed a lot of ongoing help and care from their community.

“That this child survived the procedure and is estimated to have lived for many years afterwards is astounding,” Charlotte Roberts, professor emeritus in the Department of Archaeology at the University of Durham in the UK, said in a commentary published alongside the study. She was not involved in the research.

Roberts agreed with the assessment that the the limb was deliberately removed — an accidental injury would not show a clean sloping cut. Nor was it likely that the foot was cut off as a punishment given that the individual lived for years after the amputation and was carefully and considerately buried, said Roberts, who trained as nurse before becoming an archaeologist.

The Australian team said it was possible that these hunter gatherers had knowledge of medicinal plants, such as antiseptics, that would have grown in the Borneo rainforest.

The remains of the child were dated in two ways: radiocarbon dating of charcoal remains in the layers of sediment above, at and below the skeleton; and a tooth dated by measuring the radioactive decay of uranium isotopes, chemical elements found in the tooth enamel.

It’s also the oldest known deliberate burial in the islands of Southeast Asia, with limestone markers placed on top of the burial, the body placed in a flexed, fetal position and a large ball of ocher — a mineral pigment used in Stone Age cave art.

The skeleton was discovered in a region that’s become an exciting locale for paleoanthropology: Leang Tebo, a large limestone cave with human hand stencils on the walls, located in a remote, mountainous landscape accessible only by boat at certain times of the year.

“It is from this area that humans departed by boat to cross Island South Asia to reach the mainland of Papua and Australia (the first successful major maritime voyage),” Aubert said via email. “They were advanced artists, and now we know (they) had advanced medical knowledge.”

“At Leang Tebo, we encountered this 31,000 years old prehistoric amputee less than 1 metre from the surface and we know we still have another 3-4 meters of sediments to dig before bedrock,” he added.

The dig in 2020 was cut short by alarm over the spread of Covid-19, and the Australia-based archeologists raced home to avoid border closures that would last more than two years.

“We can’t want to go back. Maybe we will find more humans remains and perhaps remains of unknown species.”

Summer is over. And the battle to get workers back to the office is heating up