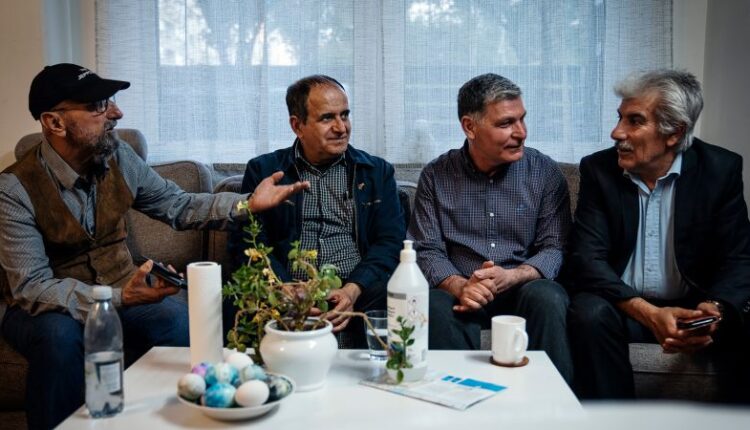 At the Kurdish Fine Arts Association on the outskirts of Gothenburg, Nawzad Bahir and his neighbors were preparing for their summer carnival.

“It’s our local highlight; a chance to celebrate our culture,” Bahir beamed, before conceding that the celebrations felt bittersweet this year, now that Sweden’s Kurdish community has found itself caught up in the country’s biggest foreign policy decision in generations.

“It’s not a comfortable position to be in,” he sighed, speaking to CNN last month.

On May 18, Sweden and Finland decided to join NATO, the world’s most powerful military alliance, citing Russia’s invasion of Ukraine as a turning point after decades of neutrality.

The Nordic nations’ applications initially appeared on track to gain the unanimous support they needed from all 30 NATO members.

Then they hit a snag: resistance from Turkey. President Recep Tayip Erdogan accused the countries of harboring “terrorist” organizations that he claims threaten his country’s security, in particular Kurds from Turkey and elsewhere – campaigning for a land of their own.

Those groups include the Kurdistan’s Workers Party, or PKK, which has been locked in a bloody battle with Ankara over greater Kurdish independence for several decades, as well as the Democratic Union Party or PYD and its militia, the YPG People’s Protection Units, offshoots of the PKK that have operated in Syria.

Sweden denies sheltering people with links to such movements and has pointed out that the PKK is banned in many parts of the world, including the United States, the United Kingdom and the European Union, of which Sweden is a member.

The YPG, however, has enjoyed support from some Western nations for its role in helping to repel ISIS.

Meanwhile, Finland, home to fewer refugees of Kurdish origin, has also voiced its own “tough-on-terrorism” stance.

So far such pronouncements, furious diplomacy and backing from the White House haven’t been enough to break the deadlock and overcome Turkey’s objections.

Delegations from Turkey, Finland and Sweden are meeting Monday at NATO headquarters in Brussels to discuss Turkey’s concerns, a NATO official confirmed to CNN.

Speaking at a joint press conference last week, Finnish Prime Minister Sanna Marin said Finland and Sweden were “taking all the issues very seriously and are having talks.” But, she added, “I also think that it’s also Turkey’s responsibility to try to find solutions at this stage.”

Kurds do not have an official homeland: most live within countries in the Middle East including northern Iraq, eastern Turkey, western Iran and small portions of northern Syria and Armenia, and many of those who now live in Sweden have come from these places.

“Erdogan is saying no matter where you are from, if you are a Kurd and you want freedom, you’re a terrorist. That’s not true,” Bahir’s friend Karim Haji Rasouli, originally from Iran, told CNN.

Swedes were split on their country’s decision to join NATO ahead of the application, with polls indicating just over half of the population was in favor of the move. Similarly, many of Gothenburg’s Kurds are also skeptical.

At an anti-NATO protest outside Gothenburg’s town hall, Iraq-born Fawzi Baban has come to meet his fellow Kurdish friends to express and voice his concerns about the path Sweden has chosen.

“NATO membership will lead us to more conflicts and maybe more wars,” he says. “As a Kurd I am more affected. Look at what some NATO members have done in my country. They completely destroyed it,” he adds, referring to the legacies of two Gulf Wars and the onslaught of ISIS thereafter.

Meanwhile Hewa Cardoi, another Gothenburg resident with Kurdish roots, thinks NATO membership will help highlight the plight of his people and the discrimination they face in the countries of their birth.

“Many NATO countries are democratic, with freedom of speech. We hope they won’t accept what Turkey is doing,” he told CNN.

As Sweden’s NATO accession hangs in the balance, experts say Turkey is renewing its push for the extradition of dozens of Kurds it claims have affiliations to organizations it says threaten its security.

Many of those Turkey is seeking to extradite are now Swedish citizens, and the subject is so sensitive that Stockholm has been loath to publicly discuss it, beyond saying it looks to have a deeper bilateral dialogue with Turkey on these issues.

“Sweden’s government could have said no to Turkey straight away, but they didn’t,” said Baris Onay, a dissident who said he fled to Sweden after being imprisoned in Turkey for his socialist political views. “Instead, they go there to talk to him. The Kurds and other political asylum seekers, how are we supposed to think? Are they with us or with Erdogan?”

Turkey, meanwhile, told CNN it would not discuss individual extradition cases with the media.

“From the Turkish perspective they are saying: Look, Sweden, (if) you want to join a military alliance where we are one of the members then you have to respect our national security perspective,” said Paul Levin, director of Stockholm University’s Institute for Turkish Studies. “We perceive of these groups as national security threats. They (Turkey) make the same demands over other NATO member states but they don’t have the same leverage as they do now that Sweden is waiting to come in,” he said.

“I frankly see rather limited ground for compromise,” Levin added.

Lawmaker Amineh Kakabaveh, who is originally from Iran, is one of five Swedish parliamentarians reportedly on Turkey’s extradition list.

“I’ve been on my guard for the last six to seven years,” Kakabaveh told CNN. “If people see that I, a Member of Parliament without roots in Turkey, can be threatened, it is a problem for freedom of expression in European countries, for migrants, for asylum seekers.

“This is a threat against democracy. By not standing up for our rights, we contribute to other problems. Today it is Turkey’s demands, tomorrow it can be another country’s,” she said.

She noted other prominent Kurdish figures on the list, such as 74-year-old writer and Nobel Peace Prize nominee Ragip Zarakolu.

Zarakolu told CNN he knows what Turkish prisons are like, having first been incarcerated there in the 1970s and most recently in 2012 for publishing works in defense of minorities – like Kurds – before being invited to settle in Sweden.

“Calling me a terrorist. It’s ridiculous. Here’s my weapon,” Zarakolu said, holding his pen aloft. “Does it shoot bullets?

“Of course, Sweden is not going to extradite me,” he added. “But it’s harassment.”