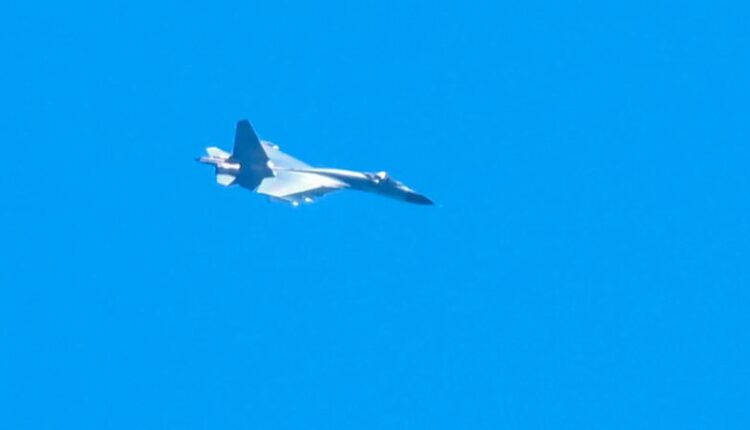 Chinese fighter jets or drones that intrude into Taiwan’s territorial airspace will be regarded as a “first strike,” Taiwan’s Defense Minister warned Wednesday, as the island seeks to step-up its defenses in response to Beijing’s military pressure.

Defense Minister Chiu Kuo-cheng made the remarks while addressing lawmakers on the threats posed by China’s recent spate of escalatory measures, which has seen Chinese warplanes and drones fly near to the self-governing island.

Chiu did not specify how Taipei would respond if People’s Liberation Army aircraft breached the territorial limit, defined as 12 nautical miles (22.2 kilometers) from the island’s shores.

“In the past, we said we won’t be the first to strike, which meant we will not fire the first shot without (China) firing artillery shells or missiles first,” Chiu Kuo-cheng said.

“But now the definition has obviously changed, as China used means such as drones. So we have adjusted, and will view any crossing of aerial entities (into Taiwan’s territorial airspace) as a first strike,” Chiu said during a meeting of the Legislature’s Foreign and National Defense Committee.

“We will not give China the pretext to create conflict. We will not provoke disputes and we will be restrained, yet that does not mean we will not counteract,” Tsai said.

How Chinese drones exposed a flaw in Taiwan’s security

CNN has reached out to China’s Foreign Ministry for comment and is waiting for a response.

Taiwan lies fewer than 110 miles (177 kilometers) off the coast of China. For more than 70 years the two sides have been governed separately, but that hasn’t stopped China’s ruling Communist Party from claiming the island as its own – despite having never controlled it.

Chinese leader Xi Jinping has said that “reunification” between China and Taiwan is inevitable and refused to rule out the use of force.

Tensions between Beijing and Taipei are at the highest they’ve been in recent decades, with the Chinese military holding major military drills near the island.

Following the visit of US House of Representative Speaker Nancy Pelosi to Taiwan in early August, China stepped up military pressure tactics on the island, sending fighter jets across the median line of the Taiwan Strait, the body of water separating Taiwan and China.

For decades, the median line had served as an informal demarcation line between the two, with military incursions across it being rare.

But Chiu said Beijing has “shattered” that understanding.

He said China has “changed the status quo” and is “establishing a new normal.”

Chiu’s statement adds to the complicated security situation across the strait, following recent remarks by US President Joe Biden that US military personnel would defend Taiwan if the Chinese military were to launch an invasion of the democratically ruled island.

According to the US intelligence community, China is actively attempting to build a military capable of taking over Taiwan – even in the face of US support for the island.

Earlier this year, CIA Deputy Director David Cohen said that while China’s leaders would prefer to gain control of Taiwan through “nonmilitary means,” they want the country’s military to have the capability to take control of the island by 2027, should such a decision be made.

Iran’s ‘women’s revolution’ could be a Berlin Wall moment