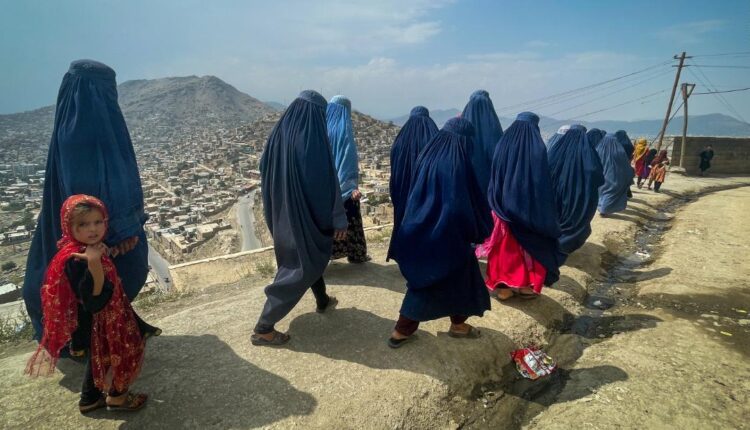 Along the way, other women quietly join the journey. It will take them three hours to reach the city center. But each day they are driven by gnawing hunger and the need to feed their children.

Their destination is a bakery, one of many in Kabul where crowds of women have started gathering in the late afternoons, patiently waiting for customers who might give them some bread.

“Sometimes we eat dinner, sometimes we don’t,” Rahmati says. “The situation has been bad for three years, but this last year was the worst. My husband tried to go to Iran to work but he was deported.”

The United Nations says that nearly half of the country faces acute hunger. According to a May report by the International Rescue Committee (IRC), 43% percent of Afghanistan’s population is living on less than one meal a day, with 90% of Afghans surveyed reporting food as their primary need.

They’re sobering statistics that encapsulate the first year back under Taliban rule, with the nation isolated and increasingly impoverished. As the US and its allies left the country, they imposed sanctions, froze $9 billion in central bank funds, and halted the foreign aid that once constituted nearly 80% of Afghanistan’s annual budget.

Outside the foreign ministry, a large mural, one of the few written in English, trumpets the Taliban government’s official stance: “The Islamic Emirate of Afghanistan wants positive and peaceful relationships with the world.”

Yet, after a year of governing, the Taliban has yet to be recognized by a single country in the world, with international funding still largely frozen. One of the main issues for Western countries has been the new government’s marginalization of minorities and women, which includes a de facto ban on secondary education for girls.

Repeated promises from the Taliban to allow girls to return to school have yet to be honored. In late June, the Taliban’s supreme leader, Haibatullah Akhundzada, pushed back against international pressure, saying Afghanistan would make its own rules.

“The fact of the matter remains that the United States is trying to find moral justifications for the collective punishment of the people of Afghanistan, by freezing the assets and by levying sanctions on Afghanistan as a whole,” foreign ministry spokesman Abdul Qahar Balkhi told CNN Saturday: “I do not believe that, that any conditions should be stipulated on the release of funds that do not belong to me, that did not belong to the previous administration, that did not belong to the government’s before it. This is the collective money of the people of Afghanistan.”

Amid fears of a full-fledged famine last winter, the US — through the World Bank — released over $1 billion in aid funding.

“That’s an example of an area where we’re going to want to continue to have pragmatic dialogue with the Taliban,” a senior State Department official told CNN. “We’re going to talk to them about humanitarian aid access, about measures that we believe can enhance the country’s macroeconomic stability.”

But a growing chorus of aid workers and economists say it’s not enough and that the continued freeze of Afghanistan’s funds is having a devastating effect.

“This is a message that no one wants to hear,” Vicki Aken, the International Rescue Committee’s country director in Afghanistan, told CNN. “These policies are putting women at risk here. In the name of feminist policies, we are seeing women die of hunger.”

According to a senior State Department official, the US is not close to recapitalizing the Afghan central bank. Although there have been discussions on the matter, the official said they still have deep concerns about the assets potentially being diverted to terrorism.

“We do not have confidence that that institution has the safeguards and monitoring in place to manage assets responsibly and inclusively. Needless to say, the Taliban sheltering of al Qaeda leader Ayman al-Zawahiri reinforces the deep concerns we have long had regarding diversion of funds to terrorist groups,” they said.

The Taliban refuses to acknowledge that al-Zawahiri, who was killed in a US drone strike earlier this month, was even in the capital, further complicating any efforts to normalize relations with the Taliban.

At the markets in Kabul, the stalls are groaning with fresh fruit and produce. The issue, vendors say, is that most people can’t afford them.

“The price of flour has doubled. The price of cooking oil has more than doubled,” one vendor says.

A few yards away, a young boy picks through a dumpster, collecting plastic waste to resell.

Cordesman warns that Afghanistan’s overall economic decline didn’t begin with the Taliban’s return to power, and neither did the country’s reliance on foreign aid.

“If we can find ways to negotiate an effective aid process, where we know the money will go to the people, where it will be distributed broadly, where it will not simply support the Taliban government, then these are negotiating initiatives we should pursue as strongly as possible. But building a tissue of lies — the equivalent of an aid process based on a house of cards — taking this money, which could go to many other countries, which can use aid effectively, makes no sense.”

As Kabul’s nights begin to cool and its days grow shorter, the fear among humanitarian workers is that this winter will be even worse than the last.

“It is not in American interest to see the economy implode,” the senior State Department official said. “We acknowledge that the humanitarian crisis remains serious and dire.”

Italians have hilarious reaction to pizza giant's exit from Italy