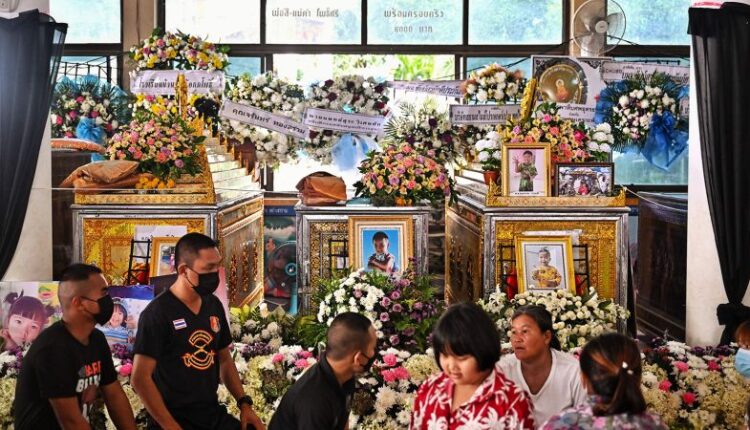 Buddhist funeral rites have begun in the grieving town of Uthai Sawan in northeastern Thailand, where families are mourning the loss of children killed in a massacre at a day care center.

Toys, flowers, milk bottles and sweets were placed alongside the small child-sized coffins, many bearing photographs of children killed in the attack, as mourners paid their respects to the victims during ceremonies on Sunday.

Monks led ceremonies at three temples in the town on Saturday, attended by families who prayed and made spirit offerings for the 36 people killed in the attack, carried out by a former policeman, who also killed his wife and son.

Most of those who died were children who were sleeping when the ex-officer forced his way into the center with a knife and a gun, shooting staff before entering classrooms.

In northeast Thailand on Sunday, queues of mourners were seen outside temples as hundreds gathered to pay their respects by lighting candles and offering food and toys.

Families previously shared their grief with CNN and recounted fond memories of their children.

Oy Yodkhao, the grandmother of a four-year-old boy named Thawatchai Siphu, expressed her disbelief that someone could murder innocent children. “I couldn’t imagine there would be this kind of people,” said Oy. “I could not imagine he was this cruel to children.”

Local media reported temples in the province were unwilling to receive the gunman’s body and perform funeral rites, so it was cremated in another city, roughly 90 minutes away by car. The gunman killed himself after the attack.