The families caught in the crosshairs of Ukraine’s southern counteroffensive 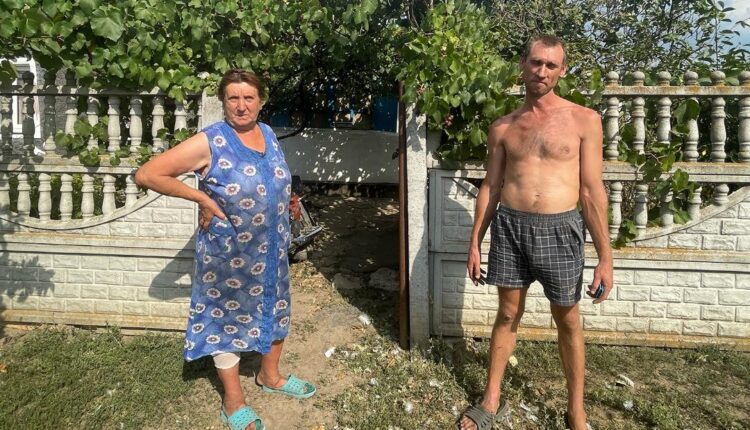 Tending to her geese, chickens and sole cow on the family’s small holding was a way of life, and she couldn’t bear to abandon the animals.

“How can I leave my home behind?” 65-year-old Pokusaeva said. “My daughter in Poland was telling me: Mum, you have to run from there.”

But she stayed behind along with her husband on their 16-hectare farm, which they rent from a local landlord close to the edge of Ukrainian-held territory.

“My heart was jumping out, especially when the planes were flying over us,” Pokusaeva said. “Every day and night — bang bang. I can’t take it anymore. People are suffering.”

But despite the increased danger, Pokusaeva is very supportive of the Ukrainian army, and its mission to recapture land from the Russians.

The offensive is still in its early days, but Ukrainian forces have already claimed some early gains, taking back four villages from the Russians on Monday, a Ukrainian military source told CNN.

Driving past Pokusaeva’s home and towards the front line through tiny villages, the area appeared largely deserted by both residents and troops. It became clear how quickly the Ukrainians had advanced, with some checkpoints left unmanned and signs of recent shell casings and military ration packs littering the side of the road.

Further to the south lies the primary target of the Ukrainian troops: the city of Kherson, the only regional capital to have fallen to Russia since the war began.

Ukrainian troops had broken through Russian defenses in “several” areas of the front line near the city of Kherson, Oleksiy Arestovych, an adviser to the head of the office of President Volodymr Zelensky, said Monday. For its part, Russia said it had managed to repel the Ukrainian advance, claiming that Ukraine had “suffered heavy losses” and “failed miserably” in their “attempted” offensive.

Videos posted on Telegram and Twitter showed fighting in and around the city over the past few days, and the Antonivskyi bridge was also damaged, cutting off a key supply line for the Russians.

“Now [the Russians] do not have the transport ability to pull up reserves from the left bank (of the river),” Natalia Humeniuk, head of the United Coordinating Press Center of Security and Defense Forces of the South of Ukraine, said on Tuesday.

“They may continue to try to set up a ferry or pontoon crossing, but the whole area where it can be deployed is also under our fire control and will be hit,” she added.

On Monday, she warned Kherson residents who have not managed to escape to find a place to shelter until the fighting is over.

Even before the counteroffensive began, residents had been fleeing the city of Kherson and the surrounding region for months. Many of them gravitate to the city of Kryvyi Rih, around 50 kilometers (31 miles) north of the front line in Kherson region.

Along with her husband Prokopenko, she now shares a room with more than a dozen other people in a Kryvyi Rih primary school turned shelter, which is home to 86 internally displaced people.

“I just want to go back to my village,” said 83-year-old Lypchak Lubbock, who made it to the shelter accompanied by her son-in-law. They fled three weeks ago when their village was occupied by Russians.

“There was a lot of shelling,” Lubbock said. “I couldn’t go out to the streets, it was very dangerous.”

For the Ukrainian troops fighting to take back these villages, any progress in this potential lengthy battle could be tenuous, but their morale has been given a boost by the early signs of success.

“The Ukrainian army is fighting heroically,” said Alexander Vilkul, the head of the military administration in Kryvyi Rih. “Victory will be ours because not only the army is fighting, but the whole nation is fighting.”