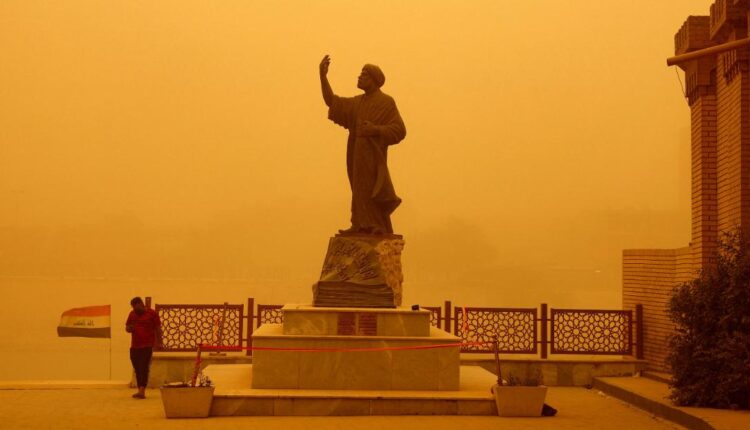 Experts are warning that the phenomenon is only getting worse. It’s driven partly by climate change that’s making the region’s landscapes hotter and drier, and warping weather patterns to create more intense storms.

A glimpse of the destructive power of the storms was seen in March 2021, when the Suez Canal was blocked for six days by a ship that was blown off course by a sandstorm, holding up almost $60 billion in trade. Twelve percent of global trade passes through that chokepoint.
But the storms wreak their greatest havoc on the health of the Middle East’s people and their economies. According to the World Bank, the phenomenon costs the region’s economy $13 billion a year.

While sandstorms are typical this time of year, they are now occurring with unprecedented frequency, experts say.

Iraq has been especially hard hit, with storms occurring on an almost weekly basis this spring. According to Ali Attiya, a professor of atmospheric science at Mustansiriyah University in Baghdad, a typical spring would see about one to three storms per month, but at least nine major storms have descended on the country since April, with more expected.

An Iraqi official warned this year that the country is now facing an average of 272 “dust days” a year, with 300 days of dust predicted by 2050.
“What’s happening in Iraq should serve as an early warning sign of what could happen in other parts of the region,” Mohammed Mahmoud, director of the Climate and Water Program at the Middle East Institute, told CNN.

Gulf states are especially vulnerable to increasing dust storms, he says, adding that countries like Egypt and Libya are also at risk.

Costs range from ruined agricultural crops and damaged machinery to the closure of ports and airports and hours spent cleaning up roads and other infrastructure.

The factors behind the increasing frequency of the storms are complex — experts blame scorching temperatures and extreme dryness, combined with years of poor land and water management in countries like Iraq and Iran, for increasing desertification and soil erosion. A drier topsoil means more dust sources can be picked up by the strong winds that blow over the Middle East.

Some experts say years of war have also played a part in the degradation of land, leading to an increase in dust sources.

“Armed conflict has had a huge impact on environment, on governance and on society,” said Igor Malgrati, the Middle East water and habitat adviser for the International Committee of the Red Cross (ICRC).

The effects of climate change will only intensify these problems. Temperatures in the Middle East are rising twice as fast as the global average and climate models predict a decrease in precipitation over some key parts of the region.

But part of the problem could also originate much further afield.

Diana Francis, the head of the Environmental and Geophysical Sciences lab at Khalifa University in the UAE, found that a major 2015 dust storm that impacted Iraq and parts of the Arabian Peninsula was formed due to changes in the polar region.

“Melting ice in the Arctic is reducing the temperature created between the polar region and mid latitudes and this makes the weather systems move slowly over our region,” she told CNN. “Convection [leading to storms] now can occur over several days whereas before, without climate change, it would have occurred over several hours and moved on.”

While countries in the region have been slow to protect themselves from the storms, some are taking note.

“There is really something to be done about increasing the water supply for these areas [in Iraq],” said Francis. “Another thing to try is planting some vegetation to reduce these bare areas that are exposed to high winds.”

In April, Iraq announced it would rehabilitate ten oases in its Western Desert to combat the increase in dust storms. But many of these projects have reportedly stalled in the past due to financial mismanagement.
Meanwhile, Saudi Arabia has committed to plant 10 billion trees in the country and another 40 billion in the region to fight sandstorms and desertification. The country is home to the world’s largest sand desert.

In 2016, the UAE’s Masdar Institute launched a high-tech dust forecasting system that countries in the Middle East could use to better prepare for major storms.

But experts argue more needs to be done and if countries don’t act soon, the consequences for the region will be devastating.

“They run the risk of these summer dust storm seasons becoming the norm,” warned Mahmoud. “In the long term, if that level of frequency and magnitude persists, you are looking at serious public health issues in respiratory illnesses and deaths and huge economic costs.”

Iranian judicial authorities investigating a building collapse that killed at least 11 people have detained the mayor of the southwestern city of Abadan and nine others, state media reported on Tuesday.

Taliban to sign pact with UAE on running Afghan airports

The Taliban will sign an agreement with the United Arab Emirates on operating airports in Afghanistan, the group’s Acting Deputy Prime Minister Mullah Abdul Ghani Baradar said on Tuesday, after months of talks with the UAE, Turkey and Qatar.

Saudi foreign minister says some progress in talks with Iran

Saudi Arabia’s Foreign Minister Prince Faisal bin Farhan said on Tuesday that there had been some progress in talks with Iran but “not enough,” and that the kingdom’s hands remain outstretched to Tehran.

An investigation by CNN offers new evidence that there was no active combat near Al Jazeera journalist Shireen Abu Akleh in the moments before she was killed by a shot to the head in the Israeli-occupied West Bank on May 11.

In a preliminary inquiry, the army said the Palestinian-American journalist was possibly hit either by indiscriminate Palestinian gunfire, or by an Israeli sniper positioned about 200 meters (about 656 feet) away in an exchange of fire with Palestinian gunmen.

But videos obtained by CNN, corroborated by testimony from eight eyewitnesses, a forensic audio analyst and an explosive weapons expert, suggest that Abu Akleh was shot dead in a targeted attack by Israeli forces.

Here are the key findings:

In a statement emailed to CNN, the Israel Defense Forces said it was conducting an investigation into the killing, adding that “assertions regarding the source of the fire that killed Ms. Abu Akleh must be carefully made and backed by hard evidence. This is what the IDF is striving to achieve.”

A Dubai couple that was deprived of a big wedding ceremony due to coronavirus-linked restrictions had to resort to the virtual world with an event in the metaverse.

Florian Ughetto, from France, and Paraguayan Liz Nunez were legally married in 2019 but they finally held a small real-world ceremony last Thursday, coupled with a bigger virtual wedding for family members abroad who couldn’t come to Dubai.

“We decided to hold our wedding in the metaverse because our families couldn’t travel to the UAE, and most importantly, because we wanted to create an unforgettable memory,” Ughetto told CNN.

The metaverse is a 3D simulated universe that uses augmented reality and virtual reality to create spaces for interaction that resemble the real world.

When the news got out, strangers in the metaverse expressed eagerness to join. “We received requests from over 300 people,” said Ughetto. The couple quickly divided the digital wedding into a ceremony for their close circle, and an afterparty for the strangers.

“This is something that could have never been achieved at a physical wedding let alone two days prior to the event,” he said.

While a virtual wedding isn’t the ceremony of choice for many, Ughetto recommends it, “especially if the circumstances are strenuous or if a couple or their families cannot physically be together on the big day.” Couples should manage their expectations though, he said, since “a wedding in the metaverse is simply different.”