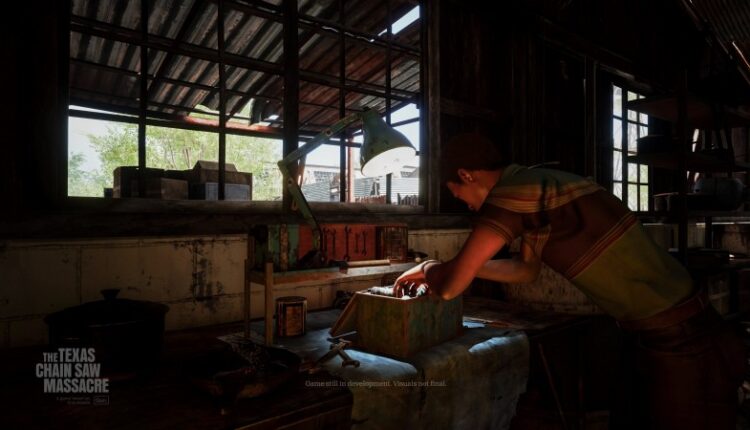 
When Gun Interactive revealed The Texas Chain Saw Massacre last year, I was underwhelmed by its short teaser but excited about its potential. It’s one of my favorite horror movie franchises, partly because of how much it still scares me – every good haunted house has a Leatherface at the end that chases you out to the exit, right? – but also because of its backdrop: Texas. Horror, be it movies or games, typically draws attention to dreary atmospheres, spooky ambiance, perhaps some bad weather, and nighttime. The Texas Chain Saw Massacre bucked that trend in the 1970s. After going hands-on with Gun Interactive’s upcoming asymmetrical 3v4 multiplayer game with the same name, I’m most impressed by how much the otherwise serene Texan farm works as a playground for escape attempts and murder.

Gun Interactive, formerly Gun Media, is perhaps best known for Friday the 13th: The Game, which it published for developer Illfonic. I loved Friday the 13th; it became the nightly hangout game for my friends and me. It’s home to some of my favorite gaming memories, like turning on a Tiny Tim song so campers would hear it through proximity chat as my Jason went in for the kill. However, some intellectual property rights issues held that game back from reaching its full potential, effectively ending its development save for regular maintenance. The rights holder of The Texas Chain Saw Massacre were big fans of Friday the 13th: The Game and were aware of the issues it encountered because they approached Gun Interactive with this game idea and the desire to let the studio lead the charge.

“They contacted us, which was a very humbling experience,” Gun CEO Wes Keltner tells me. “We were still with Friday the 13th, and I received an email from the rights holders of [The Texas Chain Saw Massacre], and they had played that game and loved it and loved our approach. They loved that it was sort of a white glove treatment to Friday the 13th, and they thought, ‘These are the guys. These are the ones we trust that we want to bring our game to market.’”

Keltner tells me that he speaks with the rights holders of this franchise daily and that they’ve been easy to work with in development. He says rights holders sometimes get a bad rap, but that’s not the case here. They’ve been open to ideas, progressive in pursuing them, and open to letting the team play with this world.

“Ninety-nine percent of the time, it’s like, ‘Oh my gosh, that’s a great idea, let’s go do it,’ so that’s been really, really cool to work with,” Keltner says, teasing that there might even be some kind of relationship between this game and past and future movies, stopping short of telling me anything more.

Keltner says the team met with them and decided the game should hone in on the original 1974 film. It was always going to be an asymmetrical game from the jump – that’s what the team does best, after all – but in what way and to what extent they could play with the franchise was a question. The team eventually landed on a 3v4 format that tasked four victims with escaping the house of horrors that is this Texan farm and three murderers, one being Leatherface, with killing them before that happens.

It’s a unique setup in the already niche realm of asymmetrical horrors currently dominated by the likes of Dead by Daylight, but playing it felt great in a familiar way. Each victim has a unique ability, and Gun designer Robert Fox III says that players can customize each with cosmetics and things that directly affect how they play. This includes unlockable skills, perks, and more. He and Keltner say that players will be able to figure out different builds that work best for them, and this, coupled with the game’s customization options and unique 3v4 dynamic, is what they’re hoping keeps players around for 1,000 hours.

In my hour with the game, I played as Connie, who has a rechargeable ability to break through locked doors, which allows her to bypass the simple but effective door unlock minigame. Smashing through a locked door was incredibly useful, especially when Leatherface, the Cook killer, or the Hitchhiker murderer were in tow.

When the match began, all four victims were in the basement. Leatherface was too, which I loved because it meant that the round immediately started with chaos. You can’t mosey around, deciding how best to escape with your team. There’s likely a chainsaw roaring in your ears, and you need to get out of the basement as soon as possible. Connie’s ability to quickly bust through locked doors made doing that easy, but the house’s first and second floors presented their own set of challenges. That’s where the grandfather NPC resides, and the three playable killers can feed him blood to improve his ability to see and hear where victims might be in the house. It’s also where the Cook and Hitchhiker prowl.

I didn’t get to play with the Cook, but I did go hands-on with the Hitchhiker. This lanky character slashes at victims with a small knife, and killing them takes significantly longer than Leatherface and his chainsaw. Killing is only half of his kit, though. He can place bone traps around the map, which alert everyone in the house when stepped on by a victim. Hearing and seeing a victim step on my trap brought an exciting adrenaline rush to my fellow killers and me as we all rushed to its location, hoping to find a victim to kill.

In the third match I participated in, I controlled the show’s star, Leatherface. He’s a massive, bouldering figure that’s loud and the exact opposite of agile. That’s okay, though, because where victims can crawl through cracks in a wall or tight gaps, Leatherface can cut right through specific barriers. I liked that I couldn’t spam the chainsaw; it’s loud, and every victim will know where you are when it’s on. Plus, turning it on requires you to play a quick and easy minigame. It was fun using this crank and subsequent chainsaw roar to let victims know I was onto them, and pressing the left trigger to throttle it for a louder effect had me laughing out loud maniacally to myself. The most satisfying part of this character, though, was the kills. His chainsaw takes victims out quickly, with plenty of blood spurting from my weapon’s incision point.

All these killings and escapes happened to the backdrop of a gorgeous Texas sunset on a lusciously green farm filled with sunflowers, old barns and sheds, overgrown grass, and a terrifyingly macabre house. Fans of the original 1974 film will recognize how much love and detail was put into the home, complete with hanging bodies, buckets of blood, knick-knacks, and more. 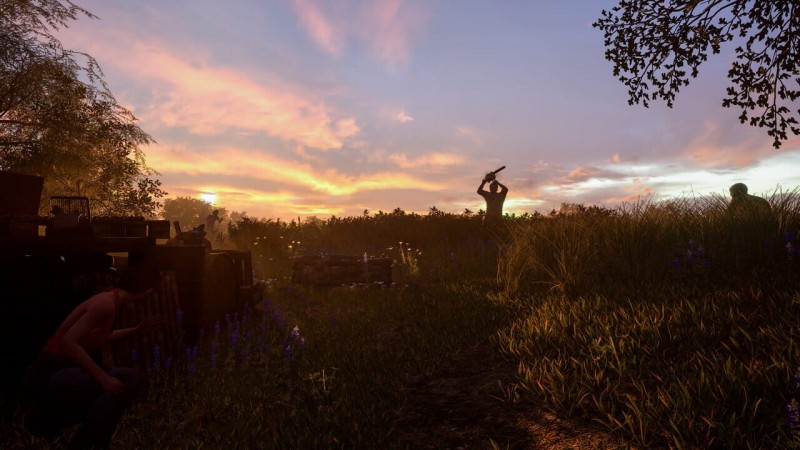 “If you watch that film, the majority of it [is] bright, sunshine-y, happy, beautiful vistas, right?” Keltner says. “[That] allowed us to kind of play around more with beauty and find that balance between the macabre and certain things that were serene. There are moments where that, yeah, you’re running for your life, but you may stop by like, ‘Dang, it’s beautiful here.’”

And he’s right! The game looks great. It’s a big step up from Friday the 13th’s visuals, but The Texas Chain Saw Massacre still retains some of the jank that fans of the former, if they’re anything like me, came to love about the game. It’s not a massive triple-A game, but the team has crafted it lovingly. And it’s also not quite out yet. I could tell what I played was a preview build. I hope the team can massage the game more to make movement feel smoother, gore more realistic, and animations more fluid.

I’m excited to see what the team is able to polish more between now and its 2023 release, and I can’t wait to learn more about skins, how Gun will incorporate other Texas Chain Saw Massacre movies into the game, the other maps, and more. If what I’ve seen so far is any indication, though, I think my friends and I will have a new hangout game next year.

The historic streak of falling US gas prices is over