The West fears Russia is about to attack Ukraine. But that’s not the way Russians are seeing it on TV 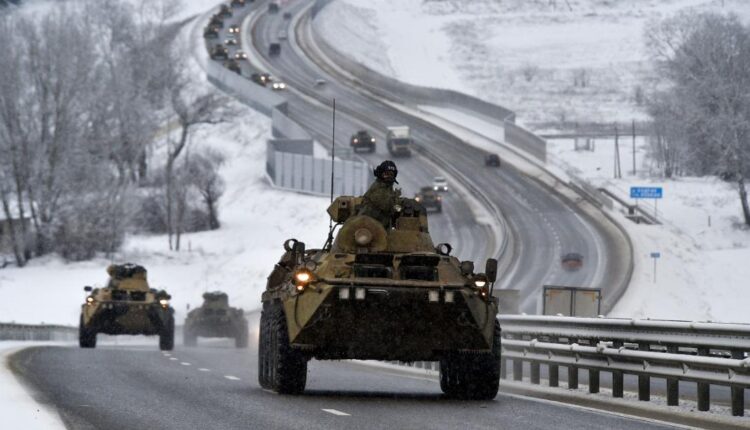 If you’re watching state TV in Moscow, you’re seeing video of troops and tanks, barbed wire and snipers taking aim, but it’s not Russia’s forces that are poised for attack — it’s NATO’s.

Welcome to Russia’s mirror-image depiction of the showdown over Ukraine. In the country’s alternate media landscape, NATO forces are carrying out a plan that’s been in the works for years: Encircle Russia, topple President Vladimir Putin and seize control of Russia’s energy resources.

In Moscow’s view, repeated in nearly every newscast and talk show, Ukraine is a failed state entirely controlled by the “puppet master” — the United States. Europe is a weak and divided collection of lap dogs taking orders from Washington. Even the US, as frighteningly threatening as it is, is weak and divided too, torn apart by political division and racial unrest.

But wait. How can those powers be a threat — and be weak at the same time? That’s one of the conundrums of Russian state propaganda. Thinking things through isn’t what they’re trying to encourage. Rather they’re trying to raise the blood pressure of their viewers — and to make them very afraid.

Russian state TV’s flagship political news show, Dmitry Kiselyov’s “Vesti Nedeli” (“News of the Week”), opened this past Sunday with Kiselyov saying: “Instead of answers to the peaceful initiatives of the Kremlin, they’re burying us with accusations and new threats.”
Any hint of disagreement between Europe and the US or NATO is headline news in Russia, and one of the top stories on Kiselyov’s show featured comments by Germany’s naval chief that Putin “deserves respect” and that Crimea — a Ukrainian territory annexed by Moscow — is “gone forever.” The report ended on the satisfied note that the officer had to resign.

Ukraine may not be caught up in a full-blown invasion for now, but there is already an all-out war of words in Russian media.

US government statements are dismissed as comments from the “Ministry of Information,” and Putin’s spokesman Dmitry Peskov has accused Washington of “information hysterics,” “lies” and “fakes.” (The word “fake” is now a Russian word, pronounced pretty much the same as the English.)

Accusations of possible Russian attacks on Ukraine are dismissed as the “half-mythological threat from Russia” or as “Russophobia” from the “Anglo-Saxons.”

Tensions aren’t high because of Russia, the Kremlin says — it’s because of NATO.

In a striking piece of mirror-image propaganda, Russian TV has taken to re-broadcasting, with translation, comments by Fox News pundit Tucker Carlson, whose anti-NATO and anti-US President Joe Biden screeds neatly align with the Kremlin’s line. “He [Carlson] ought to be on your show!” one guest on a Russian talk show told the anchor.

The state media blitz seems to be having an effect. A December poll by the non-governmental polling and sociological research organization the Levada-Center, showed that half of respondents blame the US and NATO for tensions, while only 3% to 4% blame Russia.

In another poll from Levada-Center, also from December, more than half of respondents (56%) said relations between Russia and NATO have seriously deteriorated, the highest result since the conflict with Ukraine began in 2014. And more than half of respondents (56%) say they are worried there will be a world war.
Many Russians think they’re being dragged into a war by the West, according to a focus group conducted by Riddle, an online journal on Russian affairs.

“Russia will have to respond … We are being pinched from all sides; they’re biting us. What are we supposed to do? Give in?” one focus group respondent said.

Meanwhile, Levada-Center pollsters say Russians are “mentally fatigued” by the topic of Ukraine which, they say, “seems to be imposed by major media outlets.”

As a result, viewers don’t analyze the news or double-check what they hear from TV show hosts.

To be sure, the Russian media landscape is shifting, as a younger generation goes online to get information. But most alternative news outlets in Russia have been shut down or marginalized — and the Kremlin’s parallel reality continues to dominate the airwaves.

Jill Dougherty is a former CNN foreign affairs correspondent and Moscow bureau chief with expertise in Russia and the former Soviet Union.