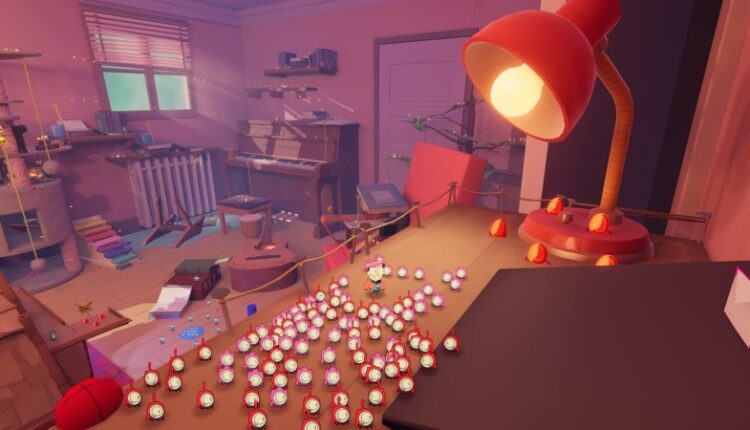 
Tinykin smartly blends platforming and puzzle-solving with the minion management of Nintendo’s Pikmin series. Players control a flea-sized astronaut who travels from his home planet to Earth to trace humanity’s true origins. The explorer’s journey takes him to an ordinary home occupied by sentient insects who worship a mysterious deity. To return home, the astronaut must assemble a rocket by gathering ordinary household objects with the help of small, adorable aliens called Tinykin. As a fan of “little person in a big world” experiences, Tinykin’s premise and world drew me in, and its gameplay satisfied me until its conclusion.

The best, though perhaps reductive, way to describe Tinykin’s gameplay would be “Pikmin as a platformer.” Each room in the house offers large, smartly laid-out playgrounds where players overcome platforming challenges and solve environmental puzzles using different types of Tinykin. These include pink varieties that carry objects, red versions that explode on impact when tossed, and green Tinykin that stack vertically to form a living ladder, among others. I like how the game introduces each Tinykin one stage at a time, letting me spend an entire level getting used to their unique talents before introducing another.

The well-crafted puzzles become better (and more involved) as you recruit more Tinykin to your ranks. Some obstacles can be as simple as carrying an oversized appliance out of your path. Other tasks become scavenger hunts, challenging you to find creative ways of traversing the world to locate and retrieve scattered items. Solutions tend to be relatively straightforward, no matter what form a puzzle takes; Tinykin never forces you to wrack your brain, at least not for very long. I found this level of challenge relaxing but engaging enough to avoid becoming mundane or overly simplistic. Tinykin’s puzzle-solving has a nice flow that keeps the experience moving, making it a breeze to get through.

Controlling the Tinykin is simple and intuitive, requiring little more than aiming and flinging them at designated targets. I also love that Tinykin can perform jobs independently, allowing me to multitask. It feels great to let a dozen helpers work on lugging objects to their destinations while I gleefully collect scattered pollen (used to upgrade a hover ability), find missing letters for a mail bug, and complete side quests.

Tinykin is a collect-a-thon like the 3D platformers of old. Gathering items and finding secrets is rewarding because every nook and cranny usually hides a discovery. Sometimes it’s bundles of pollen; other times, it’s a missing piece needed to complete a side errand, such as reuniting a photograph with its frame. The world is a colorful, oversized jungle gym, and I’m impressed with how each room feels like a lived-in dwelling while still having clear pathways that appear organically arranged.

I had the most fun freely exploring and using my Tinykin army to tinker with whatever lay before me, like pushing in protruding books or yanking a washing machine’s door open. Hopping across a kitchen, hallway, or bathroom is a delight from this small perspective, and platforming feels exceptionally tight. Riding soap bars across ziplines to get around faster makes it even better, and locating shortcuts, such as climbing ropes, expedites backtracking. I only wish there was a map because the busy environments make quest givers feel like needles in a haystack whenever it’s time to turn in a job.

Tinykin feels comforting in an old-school sense. Its challenges never become convoluted, nor does its design reinvent the wheel, and that’s okay. Tinykin executes its handful of ideas exceptionally well, making it a thoroughly enjoyable and laid-back journey that only requires six to eight hours of your time. Don’t let this delightful adventure sneak under your radar.

Expect big holiday sales on everything but the bling