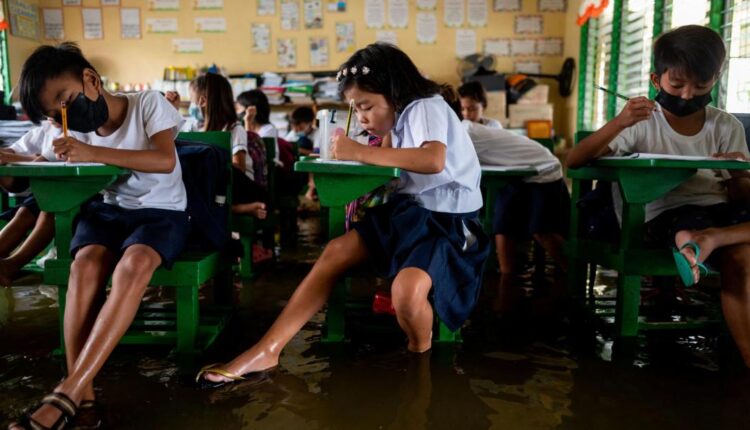 Severe Tropical Storm Ma On — known as Florita in the Philippines — made landfall in Maconacon, Isabela province at 10:30 a.m. local time, according to the Philippine Atmospheric, Geophysical and Astronomical Services Administration (PAGASA).

The weather agency said heavy to intense torrential rains were expected to sweep through much of northern Luzon — the country’s largest and most populous island — warning of widespread flooding and landslides.

Authorities preemptively evacuated more than 540 people to shelters and flood warnings were issued for the provinces of Zambales, Tarlac, Bataan and Pampanga.

Photos from Pampanga Monday showed some students spent their first day back at school after more than two years of remote leaning in flooded classrooms as the storm inched closer to land.

On Tuesday, pre-school through high-school classes were again suspended across most of northern Luzon, according to the National Disaster Risk Reduction and Management Council (NDRRMC), sending children back home after just day of class.

More than 28 million students returned to school across the country on Monday, according to the Education Department. Plans to lift the Covid restrictions, imposed in March 2020, had stalled due to fears that a slow vaccine rollout among students and teachers could lead to new outbreaks.

In a statement Monday, UNICEF said the long closures had stunted the educational development of millions of children in the country.

“Prolonged school closures, poor health risk mitigation, and household-income shocks had the biggest impact on learning poverty, resulting in many children in the Philippines failing to read and understand a simple text by age 10,” the statement said.

The shift to online classes, self-learning modules and educational television and radio programs proved extremely challenging for the country of more than 110 million, where less than a fifth of households have internet access and many lack mobile devices, according to Reuters.

This 2-year-old is unable to walk. He's one of 6 million on the brink of starvation