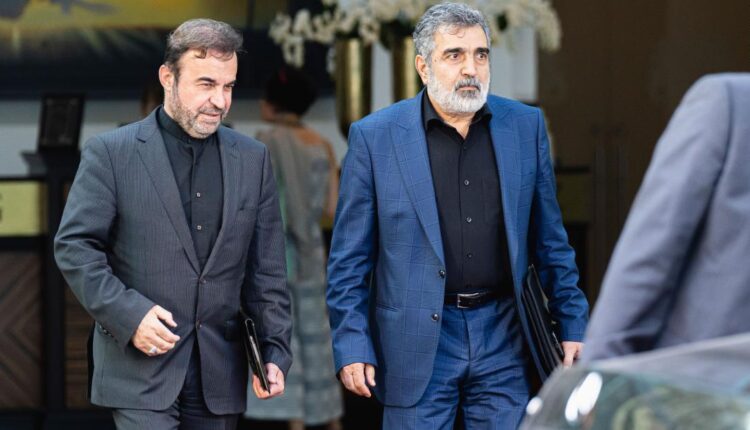 Marandi said that in order for Iran to sign up to the updated deal, the IAEA’s censure “has to be closed once and for all.”

Iran dismissed the IAEA motion as “politicized,” and responded by removing surveillance cameras at key sites in response — a move that deprived negotiators of up-to-date information on the country’s uranium enrichment program and appeared to doom the prospects of striking a deal.

So, when negotiators returned to Vienna last week, observers were surprised. Tehran’s guarded endorsement of the latest draft agreement has raised the possibility of an imminent return to the deal, despite the remaining hurdles. Even the country’s hardliners — staunchly opposed to the agreement since it was signed by then-President Hassan Rouhani government and the Obama administration in 2015 — have praised the draft as an improvement from its previous versions.

Yet Iran continues to drag its feet, as it has done since the Biden administration restarted talks to restore the deal nearly a year and a half ago. One reason, Iranian analysts argue, is because of the outsized influence wielded by one man absent from the negotiations: Trump. Analysts argue that Iran has premised the talks on the possible victory of a Republican candidate aligned with Trump — or even Trump himself — in the 2024 US presidential elections. Biden’s successor, according to Iran’s calculus, would pull out of the deal once again, unleashing a new torrent of sanctions on the country.

“The shadow of Trump looms over these talks by virtue of them having been dragged out over the past year as Iran has focused a lot on securing economic guarantees,” said Mohammad Ali Shabani, editor of Amwaj.media, a London-based outlet focused on Iran, Iraq and the Arabian Peninsula.

“If US secondary sanctions return, as we saw when Trump left the deal and all the major Western private sector companies ran away and never looked back, how do you prevent that?” Shabani said. “What kind of mechanisms can you set up to prevent that from happening again?”

Secondary sanctions are a US mechanism that penalizes any government or organization that has financial dealings with sanctioned entities.

In a development that risks adding another hurdle to the talks, the US Justice Department announced criminal charges Tuesday against a member of Iran’s Islamic Revolutionary Guard Corps for allegedly trying to orchestrate the assassination of John Bolton, who served in senior national security positions during the Trump and Bush administrations.

Still, the Iranians have a lot to gain by re-entering the deal, if even for a short period.

Sanctions relief could free up tens of billions of dollars in oil and gas revenues over the next two years, buoying a floundering Iranian economy and bolstering the popularity of Iran’s hardline President Ebrahim Raisi, Shabani said.

Conversely, there is a lot at stake for the international community if negotiations continue to falter. Since Trump withdrew from the negotiations and launched an aggressive sanctions regime in May 2018, Tehran has enriched uranium at higher levels and at an increasing speed. The UN nuclear watchdog said in June that Iran was weeks away from having a “significant quantity of enriched uranium,” but added that it “does not mean having a bomb.”

Moreover, time continues to be of the essence as the protraction of the negotiations complicate the talks. Earlier this year, an Iranian demand for the removal of its Revolutionary Guards from the US terror list was believed to be the final hurdle to reviving the deal. Now that issue appears to be off the table. But the progression of Iran’s uranium enrichment program has thrown another wrench in the wheels, leading to the IAEA’s censure of Tehran.

Iran accuses the West of trying to weaponize the IAEA censure, using it as legal pretext to pull out of a future deal. Marandi told CNN that rescinding the motion was a precondition for the agreement’s revival.

“Otherwise Iranians have no doubt that the Americans will take advantage of this, or use this as a tool to undermine the agreement within weeks or at most months. This is a precondition for the implementation of a deal,” Marandi told CNN.

Still, there is cause for some optimism, and even kicking the can down the road may have its benefits.

Even if the deal is reneged again in 2025, Shabani argued, an imminent return to the deal “gives breathing space to both sides.”

“The US gets to put the nuclear genie back in the bottle for three years and then it can deal with it in 2025 one more time,” said Shabani.

A former Twitter manager accused of spying for Saudi Arabia was convicted on Tuesday on six criminal counts, including acting as an agent for the country and trying to disguise a payment from an official tied to Saudi’s royal family, Reuters reported.

Iran made its first official import order using cryptocurrency this week, Reuters cited the semi-official Tasnim agency as saying on Tuesday. “By the end of September, the use of cryptocurrencies and smart contracts will be widely used in foreign trade with target countries,” an official from the Ministry of Industry, Mine and Trade said on Twitter.

Footage of a Gulf Arab student tossing wads of cash from a convertible sports car on a busy Jordanian street has gone viral on Arab social media, prompting condemnation of the ostentatiousness and debates about how people should behave abroad.

In an apparent celebration of his graduation, the man is seen standing in a red Ford Mustang wearing a graduation robe over a traditional Arab tunic as he tosses cash into the air while holding up traffic. Bystanders are seen scrambling to gather as much money as they can. The license plate on the car was Kuwaiti.

“And they say we’re not treated well [abroad],” tweeted Ahmed Al Sharqawi from Kuwait in an apparent reference to Gulf Arabs. “Respect others and you will be respected.”

Khaled Al Awadhi, an activist from Kuwait, said in a video posted on Twitter that the act “presents us [Kuwaitis] as people who act in a provocative way because we have money.”

“If an expatriate behaved like this in our country, we would have all turned on him,” he added, calling on parents to “raise children well.”

Oil-rich Kuwait is one of the richest Arab countries and has one of the world’s most valuable currencies.

An apology video surfaced on Twitter by a man who claimed to be the student in the initial clip, with his face blurred, saying that he is in fact Bahraini. The man said he had borrowed his Kuwaiti friend’s car and apologized for his “inappropriate behavior,” saying he was just “expressing joy.”

Hussein was the third monarch to rule the Hashemite kingdom. He was proclaimed king after his father, Talal, was declared unfit to rule due to mental illness by the nation’s parliament.

Beginning his rule as a 17-year-old schoolboy on August 11, 1952, he evolved by the end of his life into a respected statesman, peace broker, and the Middle East’s longest-serving ruler.

For more than 40 years, Hussein ruled a kingdom not much older than he was — hailing from the Hashemite dynasty that is believed to be descended from the prophet Mohammad. His reign was marked by threats to his rule at home and the loss of the West Bank and East Jerusalem to Israel in a war, but it also saw Jordan become the second Arab state to sign a peace treaty with the Jewish state.

Hussein succumbed to a battle with cancer at the age of 63, passing away on February 7, 1999. He was succeeded by his eldest son King Abdullah, the current ruler of Jordan.