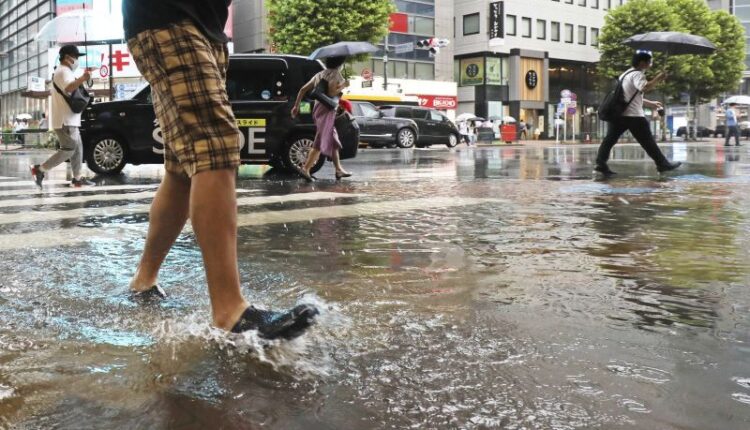 At least two people have died after Typhoon Nanmadol brought record-breaking rains and strong winds to Japan’s southernmost island of Kyushu and cut power to hundreds of thousands of people, according to local authorities.

A man in his 60s was confirmed dead in the city of Miyakonojō. The fire department found him trapped in a submerged car on farmland near a river. Firefighters pulled the man out of the vehicle, filled with water up to its roof, but he showed no vital signs and was pronounced dead, authorities told CNN.

Authorities also confirmed the death of a man in his 40s who had been missing after a mudslide destroyed his cabin in the town of Mimata.

Nanmadol made landfall in Kyushu’s Kagoshima prefecture on Sunday evening, registering as one of the strongest typhoons Japan has ever seen, according to the World Meteorological Association.

More than 300,000 households across southwestern Japan have been left without power, prompting local authorities to issue a “special warning” urging residents to seek shelter from the powerful storm.

There have been reports of flooding, and more than 700 mm of rainfall is expected across the island in the next 24 hours, the Japan Meteorological Agency (JMA) reported earlier Monday. Landslide and storm surge warnings also remain in place for over a dozen prefectures in Japan, the JMA said.

By Monday evening, parts of Kyushu, Shikoku island and the region of Chugoku experienced rainfall over more than 200 millimeters in 24 hours, with several reports places breaking records for the most rainfall on a September day. Shikoku’s Yanase saw more than 400 mm of rain.

Close to 10 million people in Kyushu were advised to seek shelter in sturdy buildings or move to higher ground in advance of the storm’s arrival. Such advisories are not mandatory and in the past authorities have struggled to encourage people to leave their homes. On Sunday, Kyushu authorities took the unusual step of issuing a rarely used “special warning” in the hope of conveying the seriousness of the threat posed by the storm.

A “large-scale disaster” could be also be imminent with extensive flooding and landslides, JMA warned. “The highest level of vigilance is required for rising water levels and flooding of rivers, landslide disasters and flooding of lowlands,” it said on Sunday.

Several prefectures which include the cities of Fukuoka and Nagasaki, have been without electricity since the arrival of the typhoon, said the Kyushu Electric power company.

Nanmadol is the 14th typhoon Japan has experienced this year and comes after the country grappled with record setting heatwaves in June that caused massive power outage to millions of residents in the capital Tokyo and high numbers of heatstroke among the vulnerable elderly.

Nanmadol is expected to travel to central Japan toward Tokyo over the coming days and will maintain much of its strength as it moves, experts warned.

Ferries and bullet train services, as well as hundreds of flights have been canceled across the country due to the dangerous weather.

Ben Enwonwu: The Nigerian artist who made a bronze sculpture of the Queen Elizabeth II