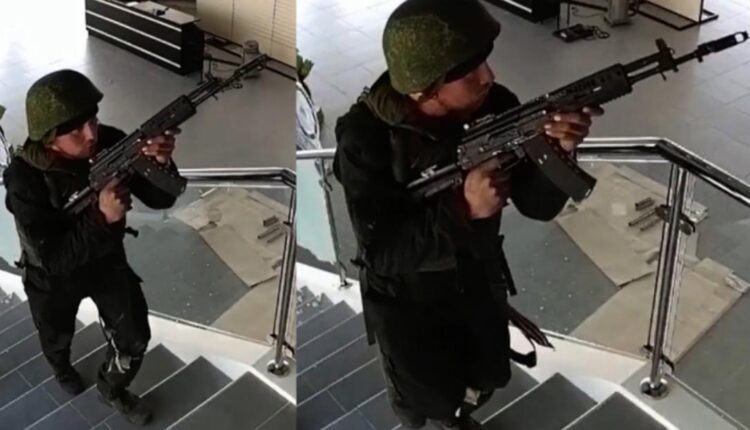 Now, Ukrainian prosecutors say they have informed Russia that their pre-trial investigation has zeroed in one of the Russian perpetrators they believe is responsible.

The Bucha Prosecutors’ Office in the Kyiv region says CNN’s exclusive reporting was instrumental in helping identify the Russian soldier.

Prosecutors say the suspect is Nikolay Sergeevich Sokovikov, adding that Russia was informed of his charges of “violation of the laws and customs of war” and “intentional murder.”

CNN has requested comment from Russia’s defense ministry but has not had a response. CNN also asked the Russian MOD for response to our original report in May and never received a reply.

Civilians shot in the back

In newly obtained footage of the incident obtained by CNN this week, two soldiers can clearly be seen shooting at something next to a business they have just overtaken. Other videos of the incident reveal their target was two unarmed civilians, shot in the back immediately following what appears to be a calm conversation with the soldiers.

The incident happened in March outside a vehicle dealership in a village near Kyiv, as Russian forces attempted to take the Ukrainian capital in the early days of the invasion.

Sokovikov, along with another unidentified serviceman, inflicted at least 12 gunshot wounds on the civilians, according to Ukrainian prosecutors. They were part of a group of soldiers who then ransacked the business and loaded stolen goods into a car marked “Tank Special Forces RUS,” prosecutors said in a statement.

CNN previously identified the victims. One was the owner of the looted dealership, whose family does not want to be named. The other was Leonid Oleksiyovych Plyats, a 68-year-old grandfather who worked as a guard there.

In addition to the killing, surveillance video shows more unprofessional behavior by the group of five soldiers, who are seen on camera drinking and toasting each other. The group was identified as members of the invading force by their uniforms, analysis of who controlled what area at the time and witness statements. The footage has been verified by CNN.

Prosecutors will not reveal exactly how they identified this particular soldier. But CNN has previously reported on one part of the process being used by Ukrainian authorities — facial recognition technology.

Ukraine’s Ministry of Digital Transformation uploads images of suspects into software that scrubs social media websites looking for matching photos. Once investigators have a match, they corroborate it with friends and family on the suspects’ social media.

The identification of this latest suspect for war crimes was months in the making, according to prosecutors. While the pre-trial investigation is ongoing, it is at least one step toward justice for the victims’ families.

CNN’s Vasco Cotovio and Oleksandra Titorova contributed to this report.

Making High On Life: A Rooftop Interview With Squanch Games In Germany