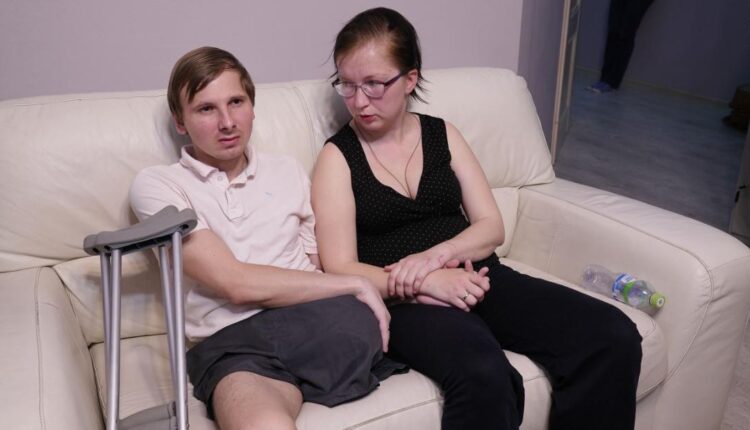 Four months ago, they were preparing for the birth of their first child. Now, they sit in an unassuming apartment turned hostel in the center of St Petersburg, Russia. They’ve become refugees. They escaped from Mariupol, the Black Sea port city now under Russian control, but are permanently scarred.

“We were planning a lot of things for the future, we were renovating our apartment,” Shishkina, 30, said. Now they never want to go back.

CNN met the married Ukrainian couple in Russia’s second largest city with Russian priest Reverend Grigory Mikhnov-Vaytenko, who is helping them with a second lease at life — giving them shelter, food and making arrangements for their future care. Mikhnov-Vaytenko estimates he and his network of volunteers have helped thousands of Ukrainian refugees since the conflict began.

When Russian troops entered Ukraine, Shishkina was resting in a maternity hospital in Mariupol while a longed-for baby grew inside her. A previous pregnancy was lost at 21 weeks, she told CNN, and it had been hard for her and her husband to conceive again. She remembers being in a quiet ward full of women approaching their due dates when a deadly bomb struck the hospital.

“It was so powerful that your ears rang and drowned everything else out,” said Shishkina. “Everything was crumbling to pieces out of nowhere.”

On March 9, Mariupol’s Maternity Hospital No. 3 was bombed in a now infamous incident that killed four people and wounded scores more. Ukrainian authorities accused Russian forces of dropping bombs on it from the air. Russian Foreign Minister Sergey Lavrov alleged that the bombed hospital was being used by Ukrainian troops and that all patients and nurses had left. A Russian Ministry of Defense spokesperson denied in a briefing that Russia had shelled the maternity hospital at all, calling it a “provocation.”

For Shishkina, caught up in a violent and brutal conflict, everything changed.

She knew she had to scream, she said, to have any hope of being found in the wreckage and rescued. Shishkina was scooped out from under the rubble and rushed to another hospital where medics were able to save her life. But not that of her unborn son.

“They did a Cesarean operation. There was panic everywhere, but they said that they have to save me. They saw that the child had no more vital signs. They tried to pull him out and revive him,” Shishkina said.

“Whoever caused that explosion, I took a direct hit in the belly — right to my baby — and they weren’t able to save him,” she told CNN, keeping her voice strong even as tears welled in her eyes.

When she was healthier, she tried to get messages to her family, not knowing if they were still in Mariupol, or even alive.

She heard some of her relatives had left. But her husband, Vladimir Shishkin, wasn’t with them.

He had been injured the day after the hospital bombing and had ended up being treated nearly 70 miles away (112 km) in Donetsk. The city, located in the far east of Ukraine, is an area run by Russian-backed separatists since 2014 and one Russian President Vladimir Putin had recognized as independent in the days before the conflict.

Shishkin, 31, told CNN he had been going to the only store open locally before heading to see his injured wife, when he and a friend named Tolik were caught in an airstrike.

“We ran as we heard the plane growing louder,” he said, crutches propped up next to him. “There was a hill, with a fence and some large house. Like everyone else around us, we hopped over the fence. I shouted ‘Tolik, Tolik,’ but he was already dead. He couldn’t say anything.”

Shishkin said a stranger heard his cries for help and carried him into a wheelbarrow to get him to the road, then into a car that took him to a hospital. His condition deteriorated and he was moved to another hospital in the Donetsk region where his leg was amputated.

It was there that Shishkina finally caught up with him and where help came from Reverend Mikhnov-Vaytenko, Archbishop of the Apostolic Orthodox Church, in St. Petersburg.

He reached out to the couple on social media when he saw Shishkina posting messages looking for assistance. He arranged for them to travel onto St. Petersburg and paid for shelter, medical care and their needs.

Mikhnov-Vaytenko estimates he and his network of volunteers have helped thousands of Ukrainian refugees since the conflict began, from paying for travel and housing for refugees to medical care or information about where they can go and what they are entitled to in Russia, all often with a kind word or prayer.

“What we can do, just for moments, (is) just to take a hand, just to look to eyes, just smile and say, ‘Everything will be OK, now you’re saved,'” the priest told CNN in his church: a single bare room in a former factory in St. Petersburg. “Then I hope with the help of God, from some period it will be in the past.”

Ukrainians arriving in Russia are given housing in a refugee center and 10,000 rubles (about US$175) as well as permission to stay for a year.

With most Ukrainians, especially from the east, fluent in Russian, Mikhnov-Vaytenko says it is a fairly easy transition. He says many of the refugees say they don’t want to go Europe initially, afraid because they can’t speak different languages.

Mikhnov-Vaytenko relies on donations to help pay for his work with the refugees, including moving many to the EU. He said money comes from Russian hospitals, companies, businesspeople and ordinary citizens.

Mikhnov-Vaytenko has no qualms about sharing the limitations of the help available in Russia and helping Ukrainians to move on if they want.

“The people who come to Russia have no information. What they can do, where they can go, what is allowed,” he told CNN.

And for now, he faces no official hindrance to his work. “I don’t see them, and they don’t see me,” he says of Russian authorities.

Mikhnov-Vaytenko left the Russian Orthodox Church in 2014 after a deadly battle in the east of Ukraine and the support given by both the church and Moscow to pro-Russian separatists there.

The head of the Russian Orthodox Church, Patriarch Kirill, is a staunch ally of Putin and supporter of what the Russian government refers to as the “special military operation” in Ukraine.

“It is now essentially a military church in Russia. We don’t have Orthodox Christians, we have military Christians,” Mikhnov-Vaytenko said.

Even with strict new laws in place, Mikhnov-Vaytenko bravely says he doesn’t fear speaking openly about his opposition to Russia’s actions in Ukraine — he only fears God.

“I was born and grew up in a dissident family,” he said, “so it’s nothing to be afraid.”

As for the young couple, Mikhnov-Vaytenko saw to it that they got a chance to start a new life, securing them tickets to Germany and accommodation. Shishkin is also set to be fitted for a prosthetic limb at a specialist hospital in Bavaria.

While Mikhnov-Vaytenko loaded the couple’s luggage into a car, Shishkina said they are nervous but excited. Already she seems lighter, happier.

“Fear? Maybe fear of the unknown … but our expectations are positive, we know everything will be better,” she said.

If Ubisoft Remakes Assassin’s Creed, It Should Look To Final Fantasy VII