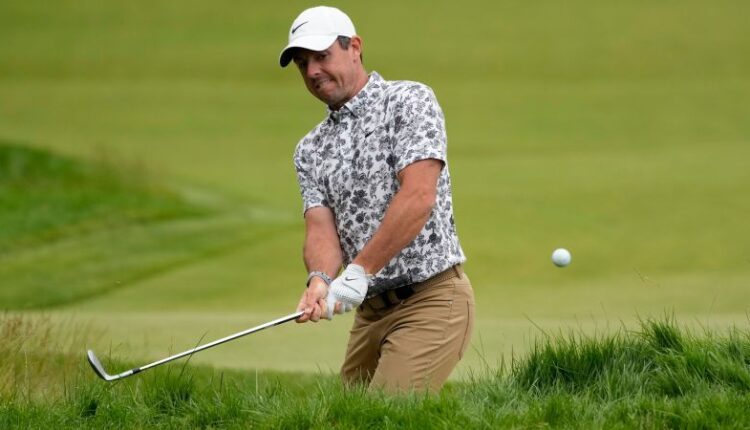 For a few brief moments, Rory McIlroy looked relatable to the average golfer. Then, the Northern Irishman served a reminder of why he is a four-time major winner.

Enjoying a fast start at the 122nd U.S Open – hosted at The Country Club in Brookline, Massachusetts – disaster struck on his fourteenth hole, the fifth hole, when McIlroy launched his tee shot towards a bunker on the right side of the fairway.

Faced with an awkward lie – the ball sat amongst the tall grass at the bunker’s tip – things went from bad to worse as the 33-year-old successfully escaped the bunker only to watch his ball fizz into the sand of another mere yards in front.

McIlroy cast a despairing look at his feet before slamming his club into the sand twice, with technique imitating an – albeit aggressive – bunker exit shot.

Fittingly, the world No. three proceeded to show his flawless technique with his subsequent exit effort from the middle of the next bunker, the ball scooping onto the green and rolling narrowly past the hole.

Sinking his putt to save par, McIlroy’s great escape highlighted an impressive opening round that left him tied for the lead at three-under 67 when he returned to the clubhouse.

Two-under through the back nine after starting at the 10th hole, he had looked set to finish his round as the outright leader with back-to-back birdies ahead of the last tee.

However, an awkward approach shot into the long grass at the par-four final hole left McIlroy needing another miracle to make par. Throwing his club away in anger, the reaction mimicked that of his fourteenth hole but the outcome did not, with McIlroy forced to end the day with his first bogey of the round.

The Northern Irishman is chasing his 22nd PGA Tour win and fifth major triumph at the US Open, a tournament that gave him his first major triumph in 2011. McIlroy had won the British Open and the PGA Championship twice by the close of 2014 but has not won a major since.

He arrived in Boston in good form after winning the Canadian Open, defending his 2019 title, and believed the triumph gave him “comfort” heading into the week.

“Playing 72 holes in the US Open is like playing under pressure the entire time even though the tournament doesn’t really start until the weekend,” McIlroy told Sky Sports after his round.

“I think mentally I am in a good spot which I showed today with some of the par saves and trying to keep myself going.”

He shares the lead with Sweden’s David Lingmerth and England’s Callum Tarren, with several big names yet to card their opening round in Boston.

Phil Mickelson, playing on his 52nd birthday, teed off to cheers. The six-time major winner has faced a tumultuous few weeks following his involvement in the controversial Saudi-backed LIV Golf series, playing at the opening event in London last week.