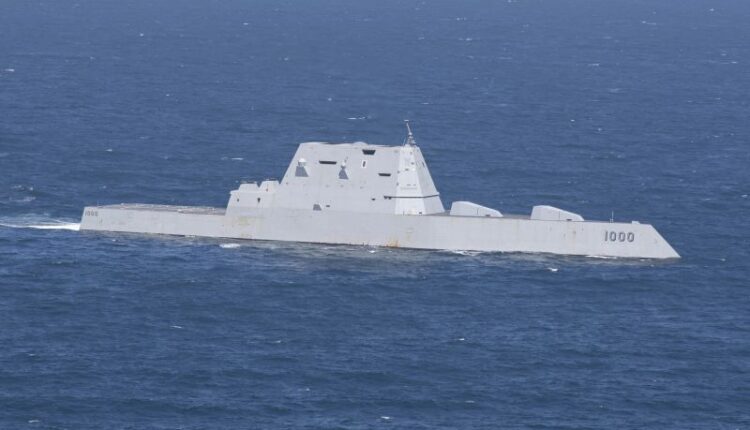 The US Navy’s most advanced surface warship is showing its stealthy profile in the western Pacific on a mission that may set the stage for the eventual deployment of US hypersonic missiles to the region.

The USS Zumwalt is the first in a class of three multimission guided missile destroyers the Navy says will “create a new level of battlespace complexity for potential adversaries.”

In the Pacific, one of those potential adversaries is obviously China, and the Zumwalt will certainly get Beijing’s attention.

“The presence of a stealth warship will draw a great deal of (Chinese) interest,” especially if the Zumwalt is outfitted with hypersonic weapons, said analyst Carl Schuster, a former US Navy captain.

And that time may not be far off.

An August report from the US Naval Institute said the Zumwalt will be upgraded next year to accommodate the Pentagon’s Common Hypersonic Glide Body (C-HGB), a weapons system that uses a booster rocket motor to fire missiles at hypersonic speed.

According to a May 2022 Congressional Research Service report, “the C-HGB is to be maneuverable, making it more difficult to detect and intercept and can travel at Mach 5 or higher … at least five times faster than the speed of sound or up to 13,000 miles (20,921 kilometers) per hour.

“The C-HGB is intended to be able to destroy targets by virtue of its velocity alone,” the report said.

After making a port call in Guam last week, the Zumwalt arrived in Japan on Monday, social media posts showed.

A Navy statement said the warship has been assigned to Destroyer Squadron 15, the US Navy’s largest destroyer squadron based outside of the United States, operating out of Yokosuka Naval Base near Tokyo.

At 610 feet (185 meters) long and displacing 16,000 metric tons, the Zumwalt is “the largest and most technologically advanced surface combatant in the world,” according to a Navy fact sheet.

In contrast, Arleigh Burke-class destroyers, the backbone of the US Navy’s fleet, are about 100 feet (30 meters) shorter with a displacement under 10,000 tons.

But while China’s People’s Liberation Army Navy can’t match Zumwalt’s size, it can certainly win the battle for quantity.

The US Navy will have only three ships in the Zumwalt class, the others being the USS Michael Mansoor and the future USS Lyndon B. Johnson.

The PLA Navy has six Type 055s active and more are expected to be coming as part of a massive shipbuilding program that has seen the Chinese naval fleet overtake the US to become the world’s largest.

USS Zumwalt is armed with 80 vertical launch cells for missiles that can strike land and sea targets as well as anti-submarine rockets, but the Type 055 has 112 launch cells capable of the same tasks.

The US Navy says the Zumwalt boasts an array of innovations, most striking among them is its stealthy design.

“The wave-piercing tumblehome hull design has facilitated a wide array of advancements. The composite superstructure significantly reduces radar cross section and other signatures, making the ship harder to detect by enemies at sea,” according to the Navy fact sheet.

The Zumwalt class of the destroyers has been a controversial and costly program for the US Navy. With research and development costs rolled in, the three ships in the class come with a price tag of about $8 billion each, according to a 2018 Government Accountability Office (GAO) report to Congress.

That per-ship price tag would had been considerably reduced if the Navy had gone ahead with its original plan to build 32 of the massive destroyers, but that number was reduced to the current three after the service decided the Zumwalt class would need substantial modifications to perform an anti-ballistic missile defense mission, something the Arleigh Burkes could do more cheaply, according to the Congressional Research Service.

The ships have also been slow to come on line. Zumwalt was commissioned in 2016, but it took four years for the Navy to accept final delivery from shipbuilder General Dynamics after all its systems were checked out.

While movements of a warship are normally referred to as deployments, the Navy is not using that term for the Zumwalt’s current presence in the Pacific, a Navy official said.

“While the ship and crew are being tasked as ships normally would be, their employment is part of the fleet integration process of introducing a class of ship into the operational environment and understanding how it can best operate with other ships/platforms,” the official said.

Schuster, the Hawaii-based analyst, called the Zumwalt’s movements “more political than military” until the Navy can get those hypersonic weapons aboard.

“At over $8 billion each, Navy is struggling to find a mission for these presently lightly armed ships,” he said.

Still, he said, it will give the PLA Navy something to think about.