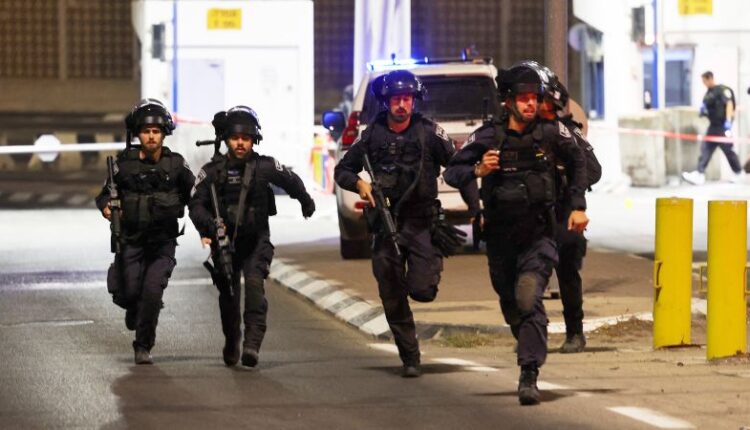 An Israeli soldier has died following a shooting at a military checkpoint in East Jerusalem on Saturday, the Israel Defense Forces (IDF) said on Twitter.

“Overnight, an IDF soldier was killed as a result of being critically injured by a shooting attack at the Shu’afat checkpoint,” the army said in the statement. “The solider was evacuated to a hospital for further medical treatment, where she was declared dead. We express our heartfelt condolences to the family.”

According to a Border Police spokesperson “a suspect arrived at the Shuafat crossing and fired at the security forces, in addition, a shot was fired from a passing vehicle. Border Guard forces are searching for the suspects.”

Israeli emergency services said a male in serious condition was transferred to a hospital, and another female was treated at the scene and is in mild condition.

Helicopters could be heard buzzing the skies of Jerusalem as police searched for the suspect.

The shooting happened at a checkpoint of the normally quiet area near the Shuafat Refugee Camp in East Jerusalem, an area considered occupied by most of the international community.

In a statement, Prime Minister Yair Lapid called the situation “serious” and said “many forces are deployed in the field and work day and night to protect the citizens of Israel. Our hearts tonight are with the victims and their families. Terror will not defeat us, we are strong, even on this difficult evening.”

The youngest was 14-year-old Adel Ibrahim Daoud, shot on Friday near the separation wall between Israel and the West Bank, the Palestinian Ministry of Health said, according to Palestinian Authority news agency WAFA.

When asked for comment about Daoud’s death, the Israel Defense Forces said “during IDF routine operational activity, IDF soldiers spotted a suspect who hurled Molotov cocktails at them adjacent to the city of Qalqilya. The soldiers responded with live fire. A hit was identified. The incident is under review.”

On the same day in a village northwest of Ramallah, a 17-year-old was shot during clashes with Israeli soldiers. WAFA said villagers were “countering an attack by Israeli settlers on the village” when soldiers opened gunfire. The IDF said they were responding to “dozens of suspects (throwing) stones” at an Israeli settlement and attacking soldiers and “responded with measures to disperse demonstrations and a suspect arrest procedure that included live fire.”

On Saturday, two 17-year-old Palestinians were killed during an Israeli military operation in the Jenin refugee camp, the Palestinian Ministry of Health said.

The IDF said forces were in the Jenin refugee camp to arrest an “Islamic Jihad operative” who it claims was “involved in terrorist activities, planning and carrying out shooting attacks towards IDF soldiers in the area.”

“During the activity, dozens of Palestinians hurled explosive devices and Molotov cocktails at IDF soldiers and shots were fired at them. The soldiers responding with live fire towards the armed suspects. Hits were identified.”

The occupied West Bank, especially the areas of Jenin and Nablus, is in an increasingly volatile and dangerous situation, as near daily clashes take place between the Israeli military and Palestinians.

Israel has been regularly raiding cities and villages in the occupied West Bank, saying it is targeting militants and their weapon caches before they have the chance to cross into Israel and carry out attacks. The operation, dubbed “Breaking the Wave” by the IDF, was launched after a series of attacks on Israelis. At least 20 Israelis and foreigners have been killed in attacks targeting civilians and soldiers in Israel and the West Bank so far this year.

In a statement, the UN Special Coordinator for the Middle East Peace Process Tor Wennesland said he is “alarmed by the deteriorating security situation, including the rise in armed clashes between Palestinians and Israeli security forces in the occupied West Bank, including East Jerusalem.”

“The mounting violence in the occupied West Bank is fueling a climate of fear, hatred and anger. It is crucial to reduce tensions immediately to open the space for crucial initiatives aimed at establishing a viable political horizon,” Wennesland said.