Visiting Venice this summer? Here’s the best art on show at the Venice Biennale 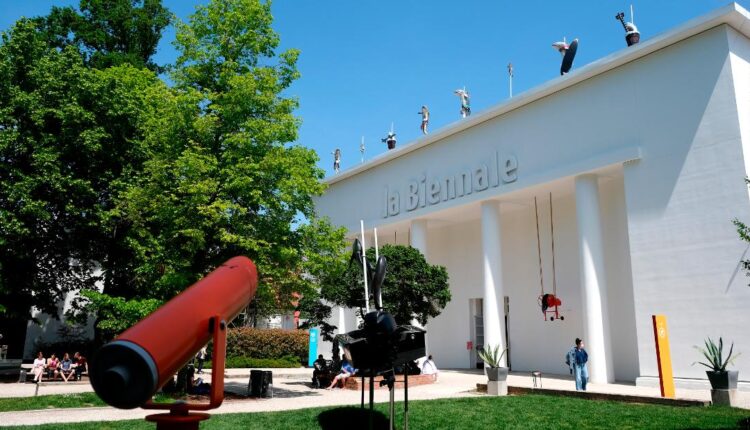 
The recently opened Venice Biennale — an 8-month-long international festival of art and culture staged every other year (though it skipped 2021 due to the pandemic) — is an opportunity to see some of the world’s best artists all in one place.

The event, with origins dating back to 1895, is formed of three parts: The central show, housed in a series of sprawling industrial buildings in an old dockyards area known as Arsenale, and in the main pavilion of the Giardini della Biennale; the national pavilions, most of which are in the Giardini which is home an architectural mismash of houses built in historical and modern styles from 29 countries including the UK, France, Japan, Brazil and the US; and finally, a series of satellite or “collateral” exhibitions and pop-up events dotted throughout the city.

Each year, an artistic director is appointed to curate the central exhibit which in many ways sets the tone for the whole festival. This time the privilege went to Italy’s own Cecilia Alemani whose day job is to run the art programme for Manhattan’s High Line in New York. Her Venice show titled “The Milk of Dreams,” was inspired by a children’s book of the same name by the late artist and author Leonora Carrington. In tribute to the surrealist picture-book, the exhibit is filled with wonderfully implausible treasures; it is also a robust tribute to women in art. In a complete flip-reversal of the norm, in the over 200 artists included, it’s often difficult to spot the work of a man.

It’s a vast, occasionally overwhelming, display of art. And to enjoy even a small portion of the delights on offer, a plan is needed. This writer walked over 10 miles a day in an effort to canvas the city and still left feeling as though more could have been seen.

So give yourself at least two days if you can, pack your most comfortable shoes and don’t forget to hydrate.

It all begins with getting your ticket from the main Arsenale ticket office (or on the website). Once you’re armed with that all important barcode, start the day at Alemani’s “The Milk of Dreams” exhibit which you can access via Ramo de la Tana.

If you smell a hint of chocolate in the air it’s because you’re nearing Delcy Morelos’ “Earthly Paradise” (2022), a deeply immersive maze made of soil mixed with hay cassava flour, warming spices and cacao powder. Stand in the center of the installation and breathe.

Once you’re suitably grounded, move onwards to seek out a series of black and white photos from the early 20th century starring a wonderfully curious German Baroness called Elsa von Freytag-Loringhoven. Despite the title, she was not wealthy. Ending up footloose and fancy free in New York in the 1910s she would pose for artists and perform as a soubrette (a fun and flirtatious character role in plays and operas) in various Greenwich Village clubs. Friends with Marcel Duchamp, she became legendary on the Dada art scene. In the photos on display, she’s seen pulling bizarre poses using props and accessories she apparently stole or found in the garbage. What a woman.

Around the corner, take a moment to inspect three sculptures by Lebanese artist Ali Cherri. The ‘Titans” are crafted from terracotta, wood and metal and are inspired by ancient protective deities. Also nearby are a set of colorful tapestries by Safia Farhat, a Tunisian artist and activist. The layered and collagelike works are a luscious blend of geometric shapes and more figurative forms.

After you’ve made it through the exhibition, circle back on some of the temporary national pavilions that are also housed in this industrial quarter. On the second floor of one of the first clusters of buildings near the entrance of the main exhibit, you’ll find the work of Ukrainian artist Pavlo Makov. Sit on the curved bench in front of his “Fountain of Exhaustion” and read this while you reflect on the strength of artists during times of crisis.

See the incredible journey to get this artwork out of Ukraine Credit: VINCENZO PINTO/AFP/Getty Images

Once you’re ready for more, head out toward the Italian pavilion which is a few minutes walk away. En route you’ll walk past New Zealand’s area, where a series of striking photos by Pacific Indigenous artist Yuki Kihara challenge old colonial ideas of paradise. You can read more about her work here.

Given where you are, it would be rude not to visit Italy’s pavilion. Spread across some 20,000 square feet, the space was given to site-specific installation artist Gian Maria Tosatti who presented a series of scenes — bringing in disused factory equipment, such as abandoned industrial-quality sewing machines — that allude to the rise and fall of industrial Italy.

Nodding to how nature fared during the country’s great industrialization, a second space allows visitors to step out onto a jetty, set inside a water-filled and lightless building. Take a moment here as subtle flickers of light (faux fireflies) dance across the water’s surface. Next, step out into the light again and head toward the permanent national pavilions in the Biennale Giardini. Go there via a delightful cafe housed inside a greenhouse built in 1894 called Serra Margherita (Margherita Greenhouse).

Outside the US pavilion by Simone Leigh. Credit: TIMOTHY SCHENCK

Once inside the Giardini, follow your instincts and allow yourself to be drawn into the buildings that grab you. If you aren’t going to inspect each national exhibit forensically (this could take hours), do not miss Simone Leigh’s stunning “Sovereignty” in the United States pavilion. The series of sculptures deserves a moment of quiet meditation on the artist’s expansive and visceral portrayal of the Black female experience.

At this point you’ll be running out of steam, so have an early dinner at the nearby Al Covo — a surprisingly low-key, high-quality spot given its location just off the main waterfront promenade. Reservations are essential during busy periods.

Inside the British pavilion by Sonia Boyce. Credit: Cristiano Corte/Courtesy of the British Council

Inside the British pavilion by Sonia Boyce. Credit: Cristiano Corte/Courtesy of the British Council

Get up early, there’s a lot to see. Today, your focus is on the collateral exhibitions dotted around the city. First head up and over the Rialto bridge toward Palazzo Vendramin Griman where you will find the work of Mexican artist Bosco Sodi. Almost nothing is a bargain in Venice, but this show, which runs through multiple rooms of the Palazzo, is free and extremely worthwhile. Sodi took up residency in the space for two months in early spring. During that time, he drew inspiration from Venice’s history as a hub for trade and culture. The result is an abstract display of sculpture and paintings that seek to remind viewers of where many valuable goods traded in Europe originated from. For example, many of his works are created using Cochineal, a traditional red pigment from Mexico that became popular in Europe after it was discovered by Spanish colonizers in the 16th century. Its rich, earthy hue pops up throughout the show and is a warming contrast to the palazzo’s lavish interiors.

Next, hop on a vaportetto (that’s a water bus for the uninitiated) and make your way to Gallerie dell’Accademia, where the starry British artist Anish Kapoor has a show that runs until October. If you’re queasy, brace yourself — the first pieces, in flashes of crimson red and dry-blood brown, are of a gory nature and large in scale. There’s a violence to this well-known work, a liverishness — but it’s almost impossible not to stare.

The rooms that follow offer something of a palette cleanser: A series of works using Vantablack, a material known for being the world’s darkest color, which Kapoor somewhat controversially paid for exclusive license to use in the field of art. Developed by a UK-based company called Surrey NanoSystems, the dark coating (it’s more a form of tech than a paint) is so black that it plays tricks on your eyes when applied to three dimensional figures, making them look flat from various angles. His show extends to a second location, so if you’re really feeling it, you could see more at the Palazzo Manfrin.

Otherwise, make your way towards the nearby and extremely satisfying Tadao Ando-renovated Palazzo Grassi. The famed Japanese architect struck a soothing balance between historical legacy and modern reinvention when he revamped the building for its owner, French billionaire Francois Pinault. The palazzo is currently home to a major survey of work by South African artist Marlene Dumas — known for her emotive paintings that can often shock, entertain and seduce you all at once.

For something different, seek out respite from the heat at the Complesso dell’Ospedaletto and Church of Santa Maria dei Derelitti, where a series of eight short films by the Fondazione In Between Art Film, an initiative by Italian costume designer Beatrice Bulgari to support moving image art, are being screened. Highlights include Karimah Ashadu’s “Plateau,” which follows a group of undocumented tin miners in Nigeria, shedding light on the conditions and risks involved in their work. The last film in the show’s sequence is also unmissable: In “Olhoda Rua” (Out Loud), Brazilian artist Jonathas de Andrade blurred the lines between documentary and fiction by casting a group of homeless people in the coastal city of Recife in a series of performative acts set to a soundtrack by percussionist Homero Basílio.

From there, you’ll be pleased to hear it’s time for a beverage and a sampling of some of Venice’s famous cicchetti snacks. For this, walk to Vino Vero, a chilled canalside spot that refuses to sell spritz but instead pours a great selection of wine. It’s a few minutes down from something of an institution, a bustling taverna called Il Paradiso Perduto. Order a massive plate of seafood pasta and a liter of house white, and be prepared to have it slammed down on the table. Enjoy it, you’ve earned it.

The good news? Your tour is done. The bad news? You’ve seen but a fraction of what’s on offer. So if you’re staying another day and haven’t had your fill, here are a few more shows to stop in to.

This is Ukraine: Defending Freedom

Downstairs, a powerful group show of work by Ukrainian artists made since Russia launched its brutal attack on the country in February. Upstairs, some of the biggest names in contemporary art, including Damien Hirst and Marina Abramović, respond to the war with new and archival work.

Where: Scuola Grande della Misericordia
When: Until August 7, 2022

The German painter offers his super-sized take on Venice in 14 paintings.

Where: Palazzo Ducale, Piazza San Marco
When: Until 29 October, 2022

A retrospective of the work of the 20th century American artist to mark 60 years since she represented the United States at the Venice Biennale in 1932.

Where: Procuratie Vecchie, Piazza San Marco
When: Until September 11, 2022

A celebration of how magic and the occult informed the Surrealist movement.

Where: The Peggy Guggenheim Collection, Accademia
When: Until 26 September, 2022

North Korea claims ‘positive trend’ in Covid outbreak, but no reply to Biden’s offer of help