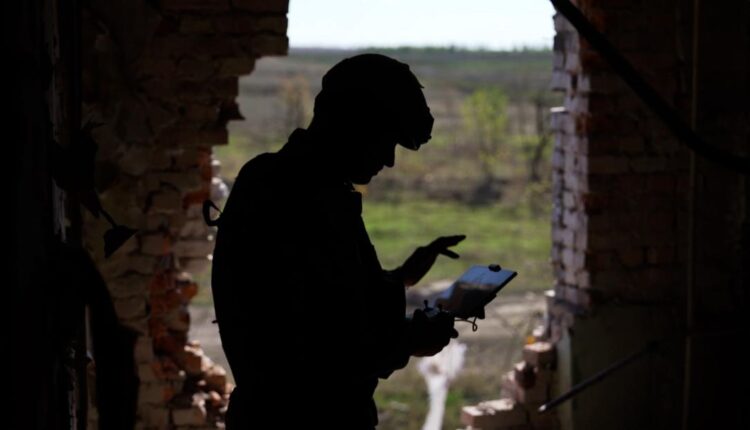 The battle is as heated as it is crucial around the city of Bakhmut. Russian positions are within 200 meters of the Ukrainian military unit that CNN has joined. The unit is caught in a gruesome artillery duel, sheltering in basements, and using commercially purchased drones as the best line of defense and intelligence.

Through broken windows, from inside rooms littered with rubble, Ukrainian soldiers look across the neighboring field, pockmarked with countless blackened craters from artillery impacts.

“They can see us here,” said one Ukrainian soldier, pointing into the distance.

This is a new type of fighter on the front line. Moscow’s manpower has dwindled after as many as 80,000 casualties, according to US officials, leading Moscow to turn to the country’s sprawling private sector of mercenaries, namely the Wagner group.

The Wagner group is allegedly run by the man known as “Putin’s Chef”, Yevgeny Prigozhin. A man matching Prigozhin’s appearance recently appeared in a video in a Russian prison yard, extolling to prisoners the virtues of joining his Wagner group and fighting on the front line.

Here in Bakhmut is where that system is put into ruthless action. This city has been the focus of Russian forces in the past weeks, even as they abandon positions around Kharkiv and appear to struggle to hold ground elsewhere. Wagner mercenaries have been deployed to that fight, according to multiple reports from Russian media, and have been making gains around the eastern edges of the city.

The mercenaries’ attacks are often devastatingly callous: the Ukrainians tell CNN that the Wagner fighters rush at them with small arms attacks, causing the Ukrainians to fire at them to protect their positions. The gunfire then gives away where the Ukrainians are, allowing the Russian artillery to target with greater accuracy.

The attacks are regular, and the shelling is almost constant.

“We see an enemy mortar unit. They’re preparing to fire at us,” a drone operator said, looking into his monitor.

During CNN’s time with this unit on Tuesday, shells landed intermittently nearby, at one point shaking the walls of the basement shelter. Here, a Ukrainian officer, known by his call sign “Price”, tells CNN about the last Russian they took prisoner.

“We are fighting a bit with those musicians,” he said, referencing the Wagner group, named after the composer.

“There was one Wagner guy we caught. He was a convict, from Russia — I don’t remember exactly where from. It was get shot or surrender for him. They act professionally, not like usual infantry units,” he said.

“The real problem is artillery, it is really precise,” he added.

As he spoke, another shell slammed near the shelter.

Bakhmut’s city center is now littered with large craters from Russian shelling, with main streets torn up, and the stadium’s seating torn in two.

Analysts believe the city could provide Moscow with a strategic position in the Donbass from which to advance further north towards Sloviansk and Kramatorsk — and offer a badly needed strategic victory at a time of spiraling losses.

At a series of trenches at another front line, buried in the forests, Martyn, another Ukrainian officer, agreed.

“[The Russians] retreated elsewhere and they need a victory, something significant, so they throw forces here,” he said.

“Of course we have casualties, not today in our unit. But you can’t avoid dead or wounded, sometimes heavily injured.”

These losses have been intensely personal. “I lost my close friend, five days after we came here. His nickname was Dancer,” he said. Like with so many call signs or nicknames, Martyn has no idea why his friend got this one.

Around the city, local life is punctuated with massive blasts from the shelling. One local, Andrei, has eyes forlorn and dark that speak to the explosions, the lack of electricity, water and calm.

Still, he said of his street, “It’s not too bad, only every second house is ruined.”

Helping many eke out a life is Natalia, selling potatoes — half a ton of them in this one morning alone. “Who knows where the shelling is coming or going,” she said, as another loud blast caused her to laugh nervously.

On Wednesday, Bakhmut’s streets appeared emptier and the shelling appeared to intensify on the eastern edge of the city, with Ukrainian guns targeting Russian positions, it seemed.

An apartment block, hit once already, was still smoking after another rocket tore through all four floors. Soldiers anxiously milled on the street outside, inspecting the damage. Military vehicles whizzed along the streets.

Slower, walking home with food in a trolley with loud and squeaky wheels, was pensioner Maria, her eyes covered by large sunglasses.

“With God you have no fear. And on your own land you cannot feel fear either,” Maria said. More blast noises broke through the shrill squeak of her rusty wheels.