‘We bought a cheap Italian home and added an elevator’ 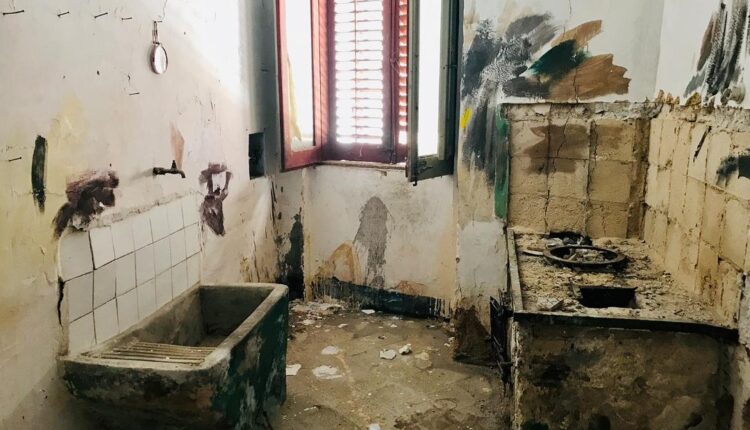 
Editor’s Note — Sign up to CNN Travel’s free nine-part Unlocking Italy newsletter for insider intel on Italy’s best loved destinations and lesser-known regions to plan your ultimate trip. Plus, we’ll get you in the mood before you go with movie suggestions, reading lists and recipes from Stanley Tucci.

(CNN) — Buyers from all around the world have been snapping up dilapidated Italian homes at rock bottom prices over the past few years as numerous depopulated towns and villages attempt to revive their dwindling communities by offering property bargains.

While the prospect of substantial structural upgrades, along with the red tape often involved in purchasing a home in a foreign country, might be off-putting to some, others have jumped at the chance.

Of course, each buyer will have a different vision for their new renovation project. Some opt to keep things as simple as possible, focusing on making the house livable again, while keeping costs down.

And there are also those who decide to go all out.

Massoud Ahmadi and Shelley Spencer, the first to complete renovations on an abandoned home in the Italian town of Sambuca di Sicilia, fall into the latter category.

The couple, from Montgomery County in the US state of Maryland, were among those who snapped up a historical dwelling in Sambuca, situated deep in the heart of Sicily, after local authorities put 16 abandoned homes up for auction with prices starting at a symbolic one euro — roughly $1.

Ahmadi and Spencer were already interested in buying a property in Italy, and had been considering looking in the Sicilian region when they read about the scheme on CNN back in 2019.

“It was love at first sight,” Spencer tells CNN. “Sambuca is very clean, with nice old stone pavements reminiscent of those in (the Washington, DC neighborhood) Georgetown and the street lights at night are very romantic.”

They were thrilled when they learned that their €10,150 (around $10,372) bid for a 100-square-meter palazzo had been accepted, and quickly got to work on giving the property a dramatic face-lift.

Two years later, and well ahead of the three-year deadline implemented by local authorities, their Italian hideaway is complete.

Ahmadi and Spencer, who work in global development projects, spent around $250,000 transforming the dilapidated property into a lavish home, which they say looks “like a Renaissance house.”

They plan to split their time between the US and Italy, spending around half of the year in their two-bedroom home, along with their daughter and grandchildren.

The renovated house features beautiful marble bathrooms, but its standout feature is undoubtedly an indoor elevator that the couple use to whiz up and down its three levels.

So what made them decide to have an elevator, complete with a security camera and phone, installed in the property?

The couple had an indoor elevator fitted inside their 100-square meter palazzo.

“We want to get older here, do yoga each day and sip coffee out on the terrace with a view of the misty lake,” explains Spencer.

“So we thought it would be great to feel as comfortable as possible by bypassing all those narrow steps, and not having to go up and down four windy staircases several times per day.”

While a quarter of a million dollars might seem like a hefty sum to spend on a project of this sort, they believe it’s actually less than the amount they would’ve shelled out on something similar back in the US.

However, an indoor elevator is definitely not a typical fixture for homes in this tiny town, and its glamorous interior design has caused quite a stir with locals.

The couple say they’ve received visits from various residents keen to see the transformation of this once dilapidated house up close.

“Locals welcome us with cakes, and come to my house curious to see what we have done with the ruin,” says Spencer, before revealing that they were recently gifted a “nice bottle of wine” at the local bar.

Aside from the elevator, the house features a relaxation area, a guest suite, a master bedroom and a living area with a modern open kitchen.

There are also several balconies, as well as a panoramic terrace that overlooks the hills and Arancio Lake, located near to the ruined Arab fort Fortino di Mazzallakkar.

Ahmadi and Spencer say they’ve already been given back the €5,000 (around $5,100) deposit they initially handed over as part of the purchase agreement, which stipulated that the renovation work be complete within three years.

They spent $250,000 on renovating the house, which features a living area with an open-plan kitchen.

The pair are currently enjoying a rather idyllic summer in Sambuca. In the mornings, they take their elevator down to the ground floor to enjoy a morning cappuccino and pastry at the local bar. Then they go for a walk, before returning to the house for a day of remote working.

“It’s a smarter home than the one we have in the US, with an alarm system and surveillance cameras,” adds Spencer, explaining that they’re able to manage the alarms and devices in their US property from Sambuca.

After buying their new home, they went on to purchase a 100-square-meter unused section of their neighbor’s home for €5,000, which they’ve since renovated and connected to their property.

“We love the peacefulness in Sambuca,” says Ahmadi. “Our street is very silent and we enjoy the town’s slow pace lifestyle philosophy, symbolized by a snail sculpture in the main piazza.”

While some travelers opt to use Sicily as a base to explore more of Italy, as well as the rest of Europe, the couple are focused on exploring the region.

They’ve already visited the town of Marsala in the Province of Trapani, and the salt pans of Trapani, and love taking long drives along the narrow rural roads in order to visit local food markets and try out different delicacies, including snails.

“In the US, highways are everywhere. But here there’s no rush,” says Massoud. “Slow travel allows us to indulge in the gorgeous views.

“To drive just nine kilometers, and go through the hills, it takes us almost two hours, but that’s what makes the adventure so special.”

Although they were able to complete the renovation in a relatively short space of time, which is particularly impressive considering the various issues brought about by the Covid-19 pandemic, there were some minor issues along the way.

Squeezing their furniture through the tight doors and windows of their 300-year-old palazzo proved to be one of the biggest challenges (the sofa went up in the elevator) and finding suitable furniture was also time-consuming.

“As Americans we have access to many stores in the States, where we can buy things of all kinds of prices,” says Spencer.

“But finding fine furniture of good quality here in Sicily that you actually like might be a problem. You need to know where the right place is for top-notch traditional wooden pieces, antiques and secondhand stores. Also, some pieces are in catalogs but not available.”

Although the structure of the building has been renovated, they decided to keep the original windows, along with the gold-colored ragged stone walls, majolica tiled floors and vaulted ceilings in order to preserve some of the historic elements of the home.

Massoud and Spencer also chose to keep some objects left behind by previous owners, which they discovered during their first visit, including a 1967 calendar that was still hanging on the walls.

Their home is one of several in the Saracen neighborhood that were abandoned after a catastrophic earthquake rocked Sicily’s Belice Valley in 1968 and devastated the area.

The town hall was flooded with interest from hundreds of overseas buyers after offering up 16 of the homes in 2019, and went on to auction 10 more buildings in 2021, this time for a symbolic €2 each.

While some of those who participated in the second auction ended up buying their home unseen due to the Covid-19 related restrictions in place at the time, Massoud was able to fly to Italy with his brother in 2019 to view the property and check out the Sicilian town ahead of their bid.

“Accompanied by my husband I sent my brother-in-law ahead on an exploratory mission to see what the town was like,” says Spencer.

“He’s an engineer and said the foundations of the village and houses in Sambuca are very solid, despite the quake.”

It took the couple just two years to transform the dilapidated property into a lavish home.

Massoud says he is extremely grateful that both the sale and the renovation went so smoothly, explaining that the town hall assisted with the paperwork and legal issues, helping them overcome the language barrier.

While he points out that they had to apply for an Italian fiscal code, or social security number, and open a bank account in the country before buying the house, which meant the process wasn’t entirely “painless,” he’s happy with how things went overall.

“In the US, I have to deal with the sub-contractors myself, but in Sambuca it was a lot easier,” says Massoud, who oversaw all of the work, along with the architect.

“I was lucky to find a good architect and I contributed to the electric work, designing the location of the lighting fixtures.”

The couple were impressed by the quality of the work by local tradesmen and builders, saying they found it to be far superior than anything they’ve encountered in the US.

“Italian artisans are incredible,” says Spencer. “How they transformed this space into something new is amazing. It was a shell, now it looks like a Renaissance house.”

However, the final bill came as something of a shock to them, as they hadn’t realized that a 10% VAT would be added to the building costs.

Before embarking on their Italian home renovation, Massoud and Spencer were often cautioned about the risks involved with buying and improving a large house overseas.

But they say they had every confidence in the Sambuca housing scheme, which is aimed at supporting local economic development, and are thrilled with the end result.

“I could pinch myself,” says Spencer. “We were really lucky. I could be telling you a lot of nightmares but I’m not, because it all worked out rather well. Way better than it would have in a small town in the States.”