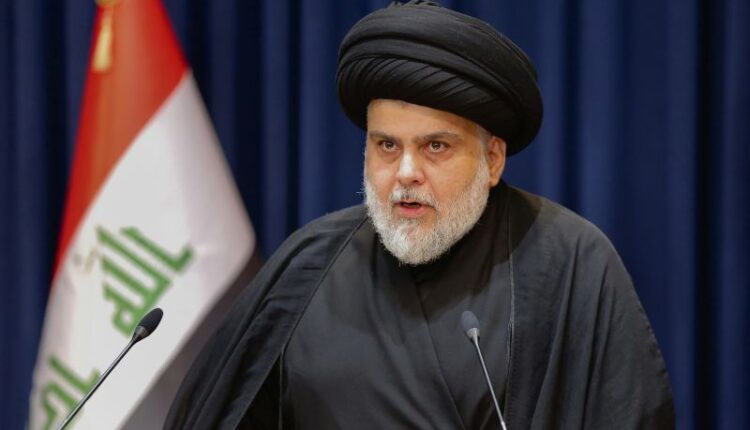 It took just 24 hours for Iraq’s most powerful man to showcase his might on the streets of Baghdad on Monday, in what turned out to be one of the capital’s most violent episodes in years.

Muqtada al-Sadr, a fiery cleric who counts both Iran and the United States as his adversaries, withdrew from politics on Monday out of frustration at his opponents’ maneuvers against him. The move prompted his loyalists to rampage through the streets and storm the heavily fortified Green Zone, where government buildings and diplomatic missions are located.

“Essentially, he let his supporters have a free 24 hours to do as they pleased,” Sajad Jiyad, a fellow at the Century Foundation in New York, told CNN’s Eleni Giokos on Tuesday. After at least 21 people were killed and 250 injured, Al-Sadr called on his followers to pull back.

“It does send a message to his rivals that he is a key player in the country,” said Jiyad. “Also that he has potential to use violence as much as any other side.”

The episode served as a reminder of the fragility of the government in Baghdad, which remained largely neutral in the crisis, as well as the competing players at home and abroad that seek to control the country’s politics.

Here’s what you need to know about the chaos in Iraq:

Who is Muqtada Al Sadr?

Al-Sadr, 48, is a cleric from a prominent Shiite family who commands the support of millions across the country.

His father, Ayatollah Muhammad Sadiq al-Sadr, was an important Shiite figure who openly spoke out against Saddam Hussein and his ruling Baath party. He was assassinated in 1999, in an operation believed to be the work of Saddam’s forces or those loyal to him. The younger al-Sadr subsequently inherited his father’s popularity.

Al-Sadr’s capacity to reinvent his role in Iraqi politics, and tap into a strong vein of Shiite protest, has helped him survive and outmaneuver many rivals over the past two decades. His latest move reinforces his place as one of the most influential figures in Iraq.

How is his relationship with foreign powers?

Al-Sadr is best known in the US for his role in leading the Mahdi Army, which he formed in 2003 during the US invasion of Iraq to fight against US-led coalition forces.

He fled to Iran during the US occupation of Iraq and returned to his country in 2011. Since then, he has become one of the fiercest critics of Tehran’s influence in Iraq and has sought to counter it. He now fashions himself as an Iraqi nationalist.

The cleric has good relations with Gulf Arab states like Saudi Arabia and the UAE, which see Iran as a threat to regional security.

“The US and the Gulf have been indirectly supportive of al-Sadr because of his stance against Iran, ignoring his historic strong ties with Iran and Iran’s ability to influence him,” said Marsin Alshamary, a research fellow at the Harvard Kennedy School’s Middle East Initiative.

Parliamentary elections in October 2021 saw Iran-backed Shiite blocs lose seats to Sadrists. Despite his win, al-Sadr failed to form a government amid opposition from Iran-backed rivals.

So, in June, he pulled his bloc from parliament in protest. The Iran-backed blocs subsequently attempted to form a government without his support in July, which prompted Sadrists to stage protests outside parliament.

An apology and a blunt warning. Words from powerful Iraqi cleric Muqtada Al-Sadr seeming to put an end to deadly protests in and around Baghdad’s green zone. But will the peace last? @bencnn takes a look at how we got here. pic.twitter.com/eq9fsuS6s5

Al-Sadr said he didn’t believe al-Haeri resigned on his own volition, suggesting that he was pressed by Iran to do so in order to weaken him.

The resignation was an “unprecedented move for an Ayatollah,” said Alshamary. “[Al-Haeri] also criticized Sadr for the instability in Iraq… I think [his] statement was released under pressure from Iran.”

Al-Sadr’s withdrawal from politics, if sincere, could leave the remaining Shiites, many of whom are backed by Iran, to dominate the country’s politics.

“Public opinion in Iraq is strongly anti-Iranian which means that any future elections – if free and fair and with decent turnout, may usher in new political parties that represent the Iraqi street,” Alshamary said.

Iraqi President Barham Salih said on Tuesday that although ending the violence is crucial to stop the bloodshed, it doesn’t mean the political crisis is over. He suggested holding early elections as a way out of the deadlock.

Jiyad said there isn’t much hope for change. “If early elections are going to have a negative effect, [the ruling elite] will put off those elections and keep the situation as it is,” he said. “It’s about who is willing to give in or compromise – neither side is willing to do so.

As politicians bicker, Iraq’s more pressing problems such as power outages are going unresolved, said Jiyad. “They are misunderstanding the people’s patience for subservience,” he said. “I think eventually protests will break out.”

A Saudi court has sentenced Nourah bint Saeed al-Qahtani to 45 years in prison for social media posts that criticized the country’s rulers, Reuters reported, citing rights group DAWN. The move comes only weeks after another Saudi woman, Salma al-Shehab, was sentenced to 34 years for publishing “false and tendentious rumors on Twitter.”

The US Navy prevented an Iranian ship from capturing an American maritime drone in the Persian Gulf overnight Monday into Tuesday local time, in what a senior US commander called a “flagrant” and “unwarranted” incident. Iran’s Nour News, which is affiliated with the Supreme National Security Council, said: “These types of vessels… can be the source of unpredictable maritime accidents due to the possibility of interruption of navigational communications.”

Iran needs stronger guarantees from Washington for the revival of a 2015 nuclear deal, its foreign minister said in Moscow on Wednesday, adding that the UN atomic watchdog should drop its “politically motivated probes” of Tehran’s nuclear work, Reuters reported.

Footage of uniformed and plainclothes men violently apprehending and beating women at an alleged orphanage has gone viral in Saudi Arabia.

The hashtag #Orphans_of_Khamis_Mushait was the top trend on Twitter in the kingdom on Wednesday, surpassing another hashtag celebrating the 37th birthday of Crown Prince Mohammed Bin Salman. The men can be seen cuffing one woman’s feet together as she struggles to break free. CNN has not verified the authenticity of the video.

The government of the southern region of Assir, where the town of Khamis Mushait is located, issued a statement saying a committee would be formed to investigate the matter “in reference to videos and pictures circulated on social media showing an incident” at a social services home in Khamis Mushait.

I Thought The Last Of Us Was Better Than This