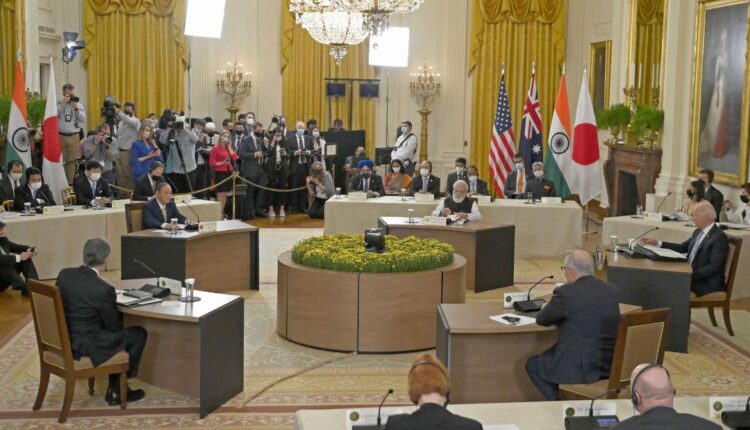 The Quad, or Quadrilateral Security Dialogue, is an informal group focused on security that dates back to the early 2000s. It has become more active in recent years as part of efforts to counter China’s reach and territorial claims in the Indo-Pacific.

Here’s what you need to know about the Quad.

How did it form?

The partnership has its roots in the response to the devastating 2004 Indian Ocean earthquake and tsunami, when the four countries set up a “regional core group” to help relief efforts. But the Quad in its current form was created in 2007 and held its first meeting in May that year.
In a speech several months after that first meeting, Japan’s then-Prime Minister Shinzo Abe described his vision of a “broader Asia … an immense network spanning the entirety of the Pacific Ocean, incorporating the United States of America and Australia.”

The countries shared “fundamental values” such as freedom and democracy, and common strategic interests, he said.

The initiative fell apart in 2008 under intense pressure from China and the threat of economic retaliation, said Cleo Paskal, a non-resident senior fellow for the Indo-Pacific at the Foundation for Defense of Democracies.

But it was revived in 2017 amid renewed concerns about China’s rapid rise as a global superpower and Beijing’s increasingly aggressive foreign policy.

Since then, the group has grown more active, with the four heads of state holding a symbolic virtual meeting in March 2021, before then meeting in person for the first time in September that year.

At the time, a senior US official emphasized the Quad was “an unofficial gathering,” but called it “a key and critical format,” adding “we are deepening coordination on a daily basis.”

What does the Quad do?

Though sometimes dubbed by critics as an “Asian NATO,” the Quad is not a formal military alliance — rather, it’s an informal strategic forum, featuring semi-regular summits, information exchanges and military drills.

It does not have the same kind of military agreements seen in NATO, like the concept of collective defense, where an attack on one member is viewed as an attack on all.

“It’s deliberately more amorphous than that, so that it can withstand changes in political decision-making in each of the democracies, and respond in a more diffuse but effective way around things like vaccines or economics,” Paskal said.

Quad members cooperate across fields including Covid-19 and natural disasters, climate change and sustainability.
But security and the goal of a “free and open Indo-Pacific” are key focuses, with the four nations frequently highlighting threats such as terrorism, disinformation and territorial disputes.

Military cooperation has increased in recent years, with Australia joining the other three in the 2020 Malabar naval exercises — the first time all four members had participated in the drills since 2007.

Last September, the US, the United Kingdom and Australia signed a security deal known as AUKUS that will eventually bring nuclear-powered submarines to the region — a move that set off a diplomatic firestorm with France and angered China.

And this January, Japan and Australia signed a treaty to strengthen defense and security cooperation, with Australia saying the agreement included “an expanding agenda for the Quad.”

How does China play into this?

The Quad has increasingly been seen as a counterweight to China’s growing reach in the region, with all four nations experiencing turbulent relations with Beijing over the past few years.

The India-China relationship has come under growing strain since May 2020 when troops from both sides were involved in a deadly clash along their disputed Himalayan border.

Australia and China have been involved in a series of trade spats since Canberra called for an independent investigation into the origins of Covid-19, while Japan and China remain at odds over disputed islands in the East China Sea.

The strategic location of each of the Quad nations — at different corners of the Indo-Pacific and with China in between them — has rattled Beijing, which fears the potential for military encirclement. It has condemned the bloc as an anti-China “clique” that is emblematic of a “poisonous” Cold War mentality.

Exacerbating these tensions, China has reiterated its territorial claims and taken a harder line in response to perceived challenges. In recent years, China has built up its military positions in the South China Sea, despite a UN tribunal dismissing its territorial claims there. It has also ramped up threats against Taiwan — a self-governing island the Chinese Communist Party sees as part of its territory despite never having ruled it — and has sent fighter jets into its air defense identification zone.

“China’s rise is now the global phenomenon that not (only) involves the neighboring nations, but also the safety of maritime security in the South China Sea, Malacca Straits, all the way to the Indian Ocean,” said Ken Jimbo, a professor in the faculty of policy management at Japan’s Keio University.

In April, China announced a security pact with the Solomon Islands, sparking protests from Australia, New Zealand and the US. Many were concerned it would allow China to build a military base in the tiny Pacific nation, though the islands’ leader has said he has no intention of this happening.

Still, some onlookers say the agreement makes Australia less safe and threatens to further destabilize the Solomon Islands, where the government’s close relationship with Beijing has already sparked protests.

“What countries are realizing more and more is that the economic investment from China is designed to lead to a weakening of political will within those countries … which brings it more strongly into the Chinese orbit,” said Paskal, from the Foundation for Defense of Democracies.

What are the other major issues?

Other issues that may come up at the summit include the security of Taiwan.

A recent surge of Chinese air incursions has raised fears for the future of the democratic island. Top US intelligence officials told Congress this month that China might be attempting to build a military capable of taking over Taiwan, and the island faces an “acute” threat between now and 2030.
Quad members have voiced support for Taiwan, which the US supplies with arms for self defense. On Monday, during a press conference in Japan, US President Joe Biden said the US would intervene militarily if China attempts to take Taiwan by force, a warning that appeared to deviate from the deliberate ambiguity traditionally held by Washington.

The White House quickly downplayed the comments, saying they don’t reflect a change in US policy.

But many analysts have drawn parallels between Russia’s invasion of Ukraine and Taiwan’s situation — concerns echoed by Japanese Prime Minister Fumio Kishida in May, when he said peace in the Taiwan Strait was “critical” and countries must “never tolerate” forceful attempts to change the status quo in East Asia.

“If Taiwan falls to China, that breaks the first island chain and compromises Japanese security,” Paskal said. “The fall of Taiwan is a deep security threat to all four Quad partners.”

North Korea and its weapons program will also likely be on the table, said Jimbo, the Keio University professor. The country has recently stepped up its missile testing, in defiance of international law and to the alarm of Japan and the US. It has launched 15 missile tests this year so far, compared to four tests in 2020 and eight in 2021.
The war in Ukraine will be another focus, with the summit taking place exactly three months after Russia launched its invasion. Australia, Japan and the US have all taken hard stances in condemning the invasion and imposing sanctions on Moscow — leaving India the odd one out.

India has long enjoyed friendly relations and a defense relationship with Moscow; most estimates suggest more than 50% of India’s military equipment comes from Russia. These supplies are vital, given India’s border tensions with both China and Pakistan.

Though India’s position has caused “a significant amount of frustration” among the other three bloc members, Jimbo said “it also reminds us that we do not really have the luxury to lose India from the Quad — so obviously, we are going to pursue what we can agree (on) at this point together with India.”

Premarket stocks: The bull market minted millions of day traders. They’re in for a rough ride