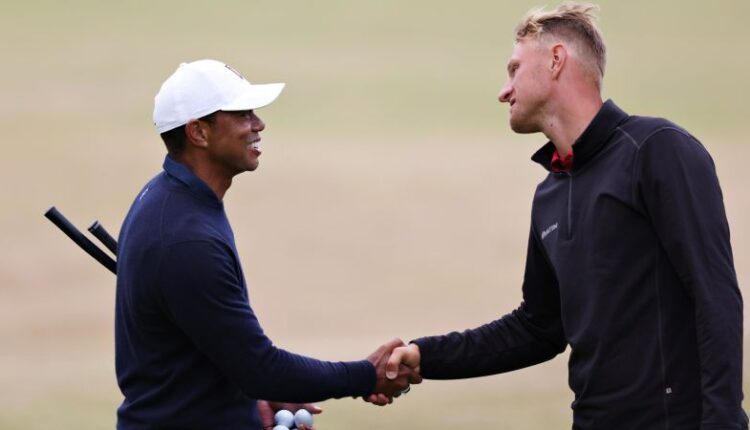 Never meet your idols, the saying goes. Try telling that to Adrian Meronk.

At the Open Championship in July, the Polish golfer tracked down Tiger Woods for a photo. Twenty-four hours later, he was chatting away with the 15-time major champion for nine holes of the legendary St. Andrews Old Course.

The fact Meronk was even at the same tournament as his childhood hero was itself a pinch-me moment. Just two weeks prior at the Irish Open, the 29-year-old had made history as the first Pole to win on the DP World Tour, stamping his maiden ticket to the 150th edition of the major.

Spotting Woods on the putting green on the Monday, Meronk holed his picture opportunity, believing that another chance would be unlikely to arise once the competition began Thursday.

Imagine his shock then when, strolling on to the 10th tee for his practice round at 8:45am the following morning, he saw none other than a lone Woods, readying his opening drive. After asking him if it was ok to join, Meronk spent the rest of the morning side-by-side with golfing royalty.

“That was probably one of my childhood dreams, so I received a lot of messages from back home and that was very exciting for me,” Meronk told CNN’s Jasmine Sanders, AKA The Jazzy Golfer.

“I picked his brain a little bit. He was very kind to me, quite talkative as well, so I was quite surprised.”

What would you ask your idol? For Meronk, it was important to begin with competition advice, especially as Woods is a two-time Open champion at St. Andrews.

With the Open potentially not returning to St. Andrews until 2030, speculation had been swirling that the 150th edition would be Woods’ last at the Scottish venue, especially given his physical struggles.

The 46-year-old had made a remarkable comeback to the sport following injuries sustained in a car accident in 2021, with returning to St. Andrews his main focus during a punishing recovery process.

“I started with some advice on the course, some lines and stuff like that,” Meronk recalled. “Some advice on how to deal with putting when it’s really windy.

“Then he was telling me about his first Open at St. Andrews, because he asked me if that was my first Open.

“I asked him how he was feeling, how is his health and stuff like that, just casual stuff. He was very open.”

The legendary golfer’s tournament ended in moving scenes on the Friday as, having missed the cut, a tearful Woods was serenaded down the 18th fairway by a heaving St. Andrews crowd. For Meronk, it was an ovation fit for the greatest of all time.

“Probably to most of the guys here he was the idol and still is to be honest,” he said. “With what he has achieved, I’d say he is the greatest in our sport for sure.”

Unlike Woods, Morenk’s time in St. Andrews went the distance. Enduring a nightmare three-over 75 start, the Pole roared back with an impressive 68 to make it to the weekend, where two strong rounds of 70 and 69 saw him record a solid 42nd place finish on his Open debut.

It marked the latest highlight of an excellent season for Meronk, his best on the DP World Tour since turning professional in 2016. After three-runner up finishes among a string of top-10 placings, the Pole emphatically laid his near-misses to rest with a three-shot victory in Kilkenny, Ireland.

“To be able to win on the DP World Tour was always a goal of mine, always a dream,” Meronk said. “To able to do it in Ireland, at the Irish Open, at such a historic event, it was a very great feeling for me.

“I had a great season this year, I was very close a couple of times, so it was also such a relief for me that I finally got it done.”

As well as writing a winner’s earnings check for over €974,000 ($947,690), the triumph also penned Meronk into the history books as the Tour’s first-ever champion from Poland, a country not famed for its golfing prowess.

Comfortably Poland’s highest ranked golfer at 64th in the world, Meronk’s best ranked compatriot is Mateusz Gradecki at No. 341. After that, there is currently no Polish golfer inside the top 2,700.

“It did [feel historic],” Meronk said. “More and more people are following me back in Poland but also all around the world. There’s a lot of Polish people everywhere.

“There was a lot of Polish people in the crowd congratulating me and I received a lot of messages from back home, so that was really exciting and also motivates me to go even further.”

At 6ft 6 inches tall, Meronk uses clubs that are longer and have different lie angles to accommodate his towering frame. To counterbalance his natural bend over the ball, Meronk repeats a rigorous posture drill five times before each session. While his longer levers allow him to drive the ball greater distances, he believes his height presents a tradeoff in the short game.

“I’ll probably have to catch other guys with accuracy,” he said.

“I have to be working on that a little bit more, especially around the green and short game. So there are drawbacks as well, but I think I can hit a little bit further with the longer levers for sure.”

Ukraine looks anxiously towards its northern border, and a fresh influx of Russian troops into Belarus

Lydia Ko is on top of the world, inspired by tough love and true love