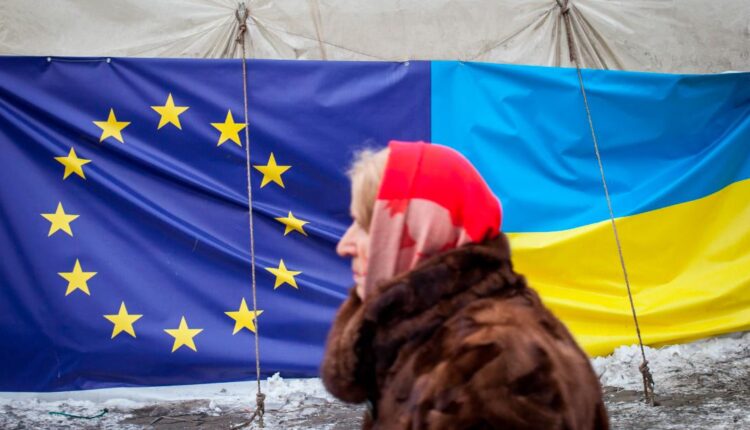 On the same day, February 28, he asked that the EU “urgently admit Ukraine using a new procedure … our goal is to be with all Europeans and, to be equal to them. I am sure we deserve it. I am sure it is possible.”

While most European nations are firmly behind Ukraine and have, to varying degrees, aided Zelensky in his war efforts, it’s far from certain that his wish will be granted.

For political and procedural reasons, it is possible that the EU ultimately decides that now is not the right time. And even if they did agree with European Commission President Ursula von der Leyen’s opinion that Ukraine should be considered for membership, it could take years, even decades, for it to become a reality.

What is the process for joining the EU?

On paper, the process is relatively straightforward. A country applies and the Commission gives a verdict on whether or not it should be considered for candidacy. As is likely to be the case with Ukraine, the Commission will probably present a few ways for member states to go about accepting a new candidate.

It is widely believed that the Commission will present two options regarding Ukraine, both of which amount to essentially the same thing, with some minor differences: that Ukraine’s accession will only start properly once the war is over and the country’s institutions are able to meet the criteria required to join the EU.

The Copenhagen Criteria is a fairly opaque trio of requirements that the EU must be satisfied a candidate state has met in order to enter the proper accession negotiations. They focus on whether or not that country has a functioning free-market economy, if the country’s institutions are fit to uphold European values such as human rights and the EU’s interpretation of the rule of law and whether the country has a functioning, inclusive democracy.

Once the country has deemed to have met this criteria, they can begin the EU’s 35 chapters of negotiation, the final three of which return to some areas of the Copenhagen Criteria.

Then, when the leaders of the EU member states have agreed, it must then be ratified in the EU Parliament and by the legislative branches of each member state’s government.

How do EU countries feel about Ukraine joining the EU?

This is where it starts to get complicated. While the EU and its 27 members have broadly supported Ukraine in its war effort, having a country that’s currently at war start the accession process raises all sorts of issues.

There are a number of candidate states that have been in the accession process for years, and have in some cases had their accession slowed down because of domestic political instability. One example of this is the case of Turkey, whose application has been essentially frozen following fears over a backslide over the rule of law and human rights. Starting the process with a country currently at war will raise questions from other candidate states who have had their applications similarly frozen.

There are also real concerns that Ukraine is a long way from meeting the Copenhagen Criteria any time soon. According to Transparency International’s 2021 Corruption Perceptions Index, Ukraine is 122nd on its list of 180 countries. For comparison, Russia sits in 136th place. Given that parts of Ukraine are currently occupied by Russia and could be long after the war is over, it is hard to predict if this improves or worsens in the coming years. Some EU officials have also expressed fears that after the war, it is hard to tell what human rights will look like inside Ukraine.

Beyond these practical questions, there are political objections too. Some Western member states who have been in the EU from the start are worried about the balance of power shifting eastwards, where some countries have been backsliding on things like the rule of law in recent years. The European establishment has struggled with both Hungary and Poland playing loose with the EU rules and is learning the hard way that once a country is inside, they can get away with a lot more.

Other member states are concerned about Ukraine joining the bloc and immediately consuming a huge amount of the EU budget because of the enormous rebuilding exercise that will need to be undertaken.

And some simply express concern that getting Ukraine into a long, painful negotiation with the EU is not the best way to support the country at this moment in time.

How long would it take?

It really depends on what state Ukraine is in when war ends. It seems highly unlikely that Ukraine will be anywhere near meeting the criteria to even start negotiations for a significant period of time after the end of the war. Aside from the rebuilding project, Ukraine will have to make the transition from a country operating under various degrees of martial law and curfews to a functioning democracy.

The average time for a country to join the EU is four years and 10 months, according to the London think tank, UK in a Changing Europe. Member states that might be considered a sort of blueprint for Ukraine’s membership — Bulgaria, Romania, Poland, Slovenia — were all over the average wait time.

What would joining the EU mean for Ukraine?

Ukraine would be a member of the world’s largest trading bloc, the EU’s single market and customs union, and would have the protection of EU courts and access to the EU budget.

Joining the EU would also place Ukraine very clearly in the club of countries that are considered to be part of the Western alliance and US-led world order.

Moscow has previously said that joining the EU would be on a par with joining NATO, a point harder to push back against now that the EU is becoming so overtly geopolitical.

Russia has already reacted very badly to the suggestion that Finland and Sweden, EU member states, might join NATO. Seeing Ukraine warmly embraced by an institution so associated with the West will no doubt be seen as an act of aggression by Putin.

How likely is Ukraine’s bid to succeed?

It won’t happen soon, but it is likely that the EU will make a special effort to support Ukraine following its invasion by Russia.

Many European leaders have been to visit Zelensky in Kyiv, and the thinking among some officials is that they cannot come out of the leaders’ summit on June 24 empty-handed after posing for photos alongside a real war-time president.

If von der Leyen does present the member states with her caveated version of accepting Ukraine’s candidacy, it would be difficult for the EU to reject it outright.

But the EU has a long history of doing unexpected things, even throughout this crisis. And more often than not, these debates become a war of attrition among countries unable to see eye-to-eye, before being kicked into the long grass for another day.